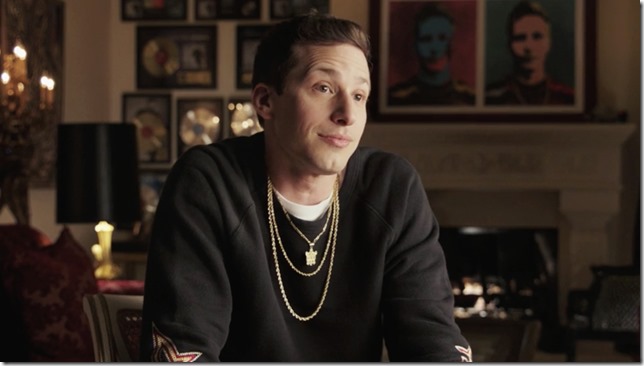 To paraphrase The Clash, phony Biebermania has bitten the dust.

In the cheeky mockumentary Popstar: Never Stop Never Stopping, Andy Samberg’s Conner Friel, AKA Conner-4-Real, imagines an older, unwiser Bieber — one liberated from adolescent demographics if not behavior, extravagantly tatted and gold-chained, monumentally egotistical, and stricken with a hopeless case of affluenza.

In a style that particularly parodies the Bieber documentary Never Say Never, Popstar satirizes the backstage dramas and mass-media sensationalism surrounding our most empty-headed stadium-fillers — easy targets shot to splinters by writer-directors Akiva Schaffer and Jorma Taccone and co-writer Samberg (who collectively form the Lonely Island comedy troupe). Conner, we soon learn, is promoting the upcoming “drop” of his second solo album, Connquest, with an inevitably disastrous world tour.

A former member of a legendary youth trio called Style Boyz — a kind of Backstreet-meets-Beastie Boys phenomenon — that split over artistic differences, Conner re-conquered the pop world with his debut solo album. But with his sophomore recording failing to meet expectations, he’s about to discover just how fickle the pop market is.

Schaffer, Taccone and Samberg are, together, not as talented as Christopher Guest: They strike broad notes where Guest’s pseudo-docs favored nuance. But their subject is inherently broad itself, and with the budget to bolster their parody, they ingeniously skewer the vulgarity, salaciousness, bombast and faux-earnestness of contemporary pop music.

The ostentatious tour sets with their pyrotechnics, superfluous holograms and meretricious costumes; the clichéd album covers; and especially the proudly offensive and/or nonsensical lyrics unsubtly critique the unsubtle. The synthetic beats, recorded and played through an iPod, are sleek and catchy enough to land radio play themselves, and with Adam Levine, Linkin Park, Pink and Seal appearing on the film’s soundtrack, it might very well become what it’s spoofing.

Indeed, a roster of A-list music stars play along with Lonely Island’s conceit, appearing as themselves to offer effusive sound bites — musicians from Nas and Questlove to Carrie Underwood and Arcade Fire laud Conner’s earth-shattering importance — or game self-mockery: Mariah Carey says she relates to Conner’s new single “I’m So Humble” because “I’m probably the most humble person I know.” Only Ringo Starr has the cojones to cut down Conner’s “socially conscious” single “Equal Rights,” about marriage equality, by reminding the daft millionaire that same-sex couples can already wed.

A human story, sort of, emerges through the pomp and circumstance of PR stunts and arena meltdowns, and it involves Conner’s former bandmates. Owen (Taccone), as Conner’s thankless DJ, remains part of his entourage, though he’s relegated to the sidelines or openly disparaged, his contributions mostly ceremonial. The other Style Boy, lyricist Lawrence (Schaffer), has hilariously stepped off the grid, operating a farm and creating terrible woodwork from his reclusive shed, still seething from being discredited by Conner on live television for his Style Boyz contributions.

This is where the movie’s Judd Apatow producing credit is most evident. Rather than maintain its brutal, anarchic promise, Popstar feels the need to provide a sweet and redemptive arc for its broken trio, as if Popstar were one of Apatow’s sentimental comedies — as if we watch a movie like this to feel genuine emotion. Popstar remains more effective when it deconstructs the infrastructure of fame, from the TMZ-style paparazzi salivating over Conner’s every misstep (Will Arnett amusingly sends up Harvey Levin) to the absurdity of multi-platform marketing (Conner embeds his music in home appliances, his goofy catchphrases blasting from refrigerators and microwaves whenever their doors are opened).

Popstar is tapped from the same riffed-from-the-headlines, self-referential comedy vein as Top 5, This is the End and the Ted franchise, all films that feel tailored to the moment but risk inconsequentiality 20 years down the road. But for now, Popstar drops at the right moment: It’s about time pop ate itself.

Film: Just in time with the opening of movie theaters in Palm Beach County comes the season’s most … END_OF_DOCUMENT_TOKEN_TO_BE_REPLACED

Music: The very last concert Franz Joseph Haydn attended in his life was in March 1808, about a year … END_OF_DOCUMENT_TOKEN_TO_BE_REPLACED