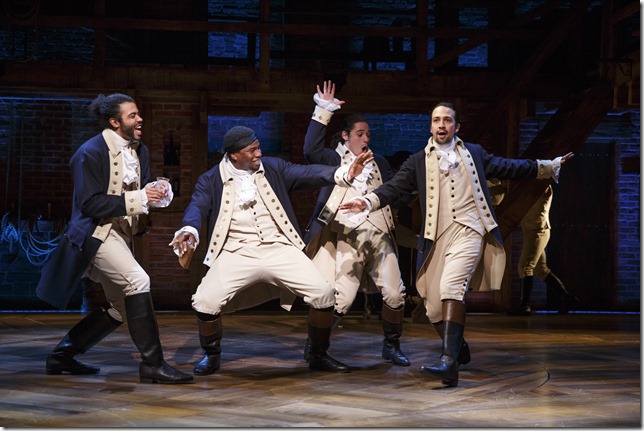 The Bonnet Competition — about which I will talk more in a few days — is a snarky celebration of the Broadway community and one of the best shows around, year in and year out, even if it only runs for two days. Intentionally.

Around it, for the nine days I will be in New York, I will be seeing and reviewing 12 — possibly 13 — productions. I will be beginning with the new, still in previews, musical Waitress, based on the 2007 diner film comedy, and ending with a revival of Arthur Miller’s epic drama, The Crucible. In between, I will be seeing Eclipsed, American Psycho, The Easter Bonnet Competition, The School of Rock, The Humans, Blackbird, Bright Star, Tuck Everlasting, The Father and Shuffle Along. Yes, I’d better take careful notes.

One show is conspicuously absent from this list. It’s the show of the season, Lin-Manuel Miranda’s Hamilton, the toughest ticket to score in my almost 35 years of reviewing on Broadway. Far harder than Cats, Phantom of the Opera or Book of Mormon, all of which I saw with reviewer’s comp tickets soon after they opened. Hamilton is approaching its first-year mark on Broadway and still reviewers and civilians alike are clamoring for tickets. Apparently people will pay anything to see this rap musical about our Founding Fathers. The producers of Hamilton have just announced that their premium seats will now go for $950 apiece. Oy.

Personally, I couldn’t even get the show’s press agent to come to the phone to tell me there were no tickets available. My only hope now — this is why I may be seeing 13 shows this week — is to win the digital lottery, where a mere 21 seats are sold for the paltry price of $10. I still have Monday night open, a night that most Broadway shows are dark, but Hamilton gives a performance. Wish me luck.

Film: Playwright August Wilson began his chronicle of the African-American experience throughout the … END_OF_DOCUMENT_TOKEN_TO_BE_REPLACED

Film: Just in time with the opening of movie theaters in Palm Beach County comes the season’s most … END_OF_DOCUMENT_TOKEN_TO_BE_REPLACED

Music: The very last concert Franz Joseph Haydn attended in his life was in March 1808, about a year … END_OF_DOCUMENT_TOKEN_TO_BE_REPLACED