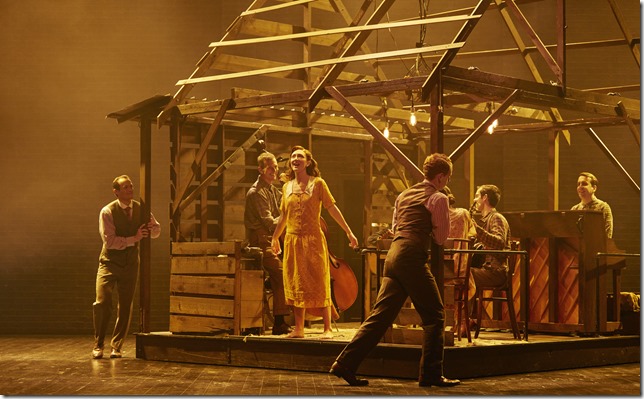 With only one show on my schedule today, I could have relaxed, but this is New York City, where so many artists, writers and producers of shows on tour, heading to South Florida, reside. So I arranged to interview a couple of them today, to bank them stories for when the shows arrive at home.

This afternoon, for instance, I met with Doug McGrath, screenwriter (Bullets Over Broadway, with Woody Allen), film director (Infamous) and musical book writer. It is for the last that we spoke, as he regaled me with stories about the creation of Beautiful: The Carole King Musical, the long-running biographical show that its subject initially wanted no part of. A terrific interview.

Earlier in the day, I subwayed down to the offices of The Rodgers and Hammerstein Office to talk to Ted Chapin, the organization’s president and executive director. His job, among many responsibilities, is to encourage the production of shows by the office’s namesakes and other writers it represents. It was Chapin who encouraged the creation of the new tour of The Sound of Music and, even more importantly, persuaded Tony Award winner Jack O’Brien (Hairspray, The Coast of Utopia) to direct it. The advance word is that he has shaken off the show’s cobwebs and sugar crust. The Sound of Music is, Chapin insists, one of O’Brien’s “favorite things.” We’ll see.

Tonight’s show was Bright Star, the new bluegrass musical written by longtime collaborators Steve Martin and Edie Brickell. Bluegrass is not a favorite style of mine — I think I was traumatized by a banjo when I was little — but it fits well this countrified fable about a renowned Southern magazine editor (the sublime Carmen Cusack, a Brit making her Broadway debut), whose early romance produced an out-of-wedlock son, taken from her by the father of her lover to be put up for adoption against her will.

Somehow it doesn’t play as much of a soap opera as it sounds here. Her story is told in two parallel time periods and involves a few humdinger coincidences and personal connections. Fortunately, Walter Bobbie’s staging is disarming, the plot is just preposterous enough to have us go along with it and it all leads to a Shakespearean happy ending with multiple nuptials.

I’m glad I saw Bright Star, but I have to worry for its fate on a Broadway more accustomed to slickness and bombast. And in a season with Hamilton likely to sweep the Tony Awards, Bright Star cannot count on much marketing help from that corner.

Film: Playwright August Wilson began his chronicle of the African-American experience throughout the … END_OF_DOCUMENT_TOKEN_TO_BE_REPLACED

Film: Just in time with the opening of movie theaters in Palm Beach County comes the season’s most … END_OF_DOCUMENT_TOKEN_TO_BE_REPLACED

Music: The very last concert Franz Joseph Haydn attended in his life was in March 1808, about a year … END_OF_DOCUMENT_TOKEN_TO_BE_REPLACED