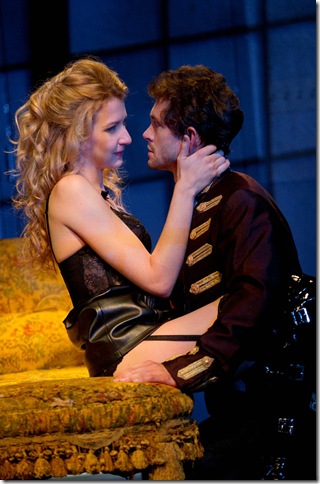 Just before catching a plane back to South Florida, I was able to squeeze in one final play — a matinee of David Ives’ kinky, amusing Venus in Fur, starring Broadway’s latest “it” girl, Nina Arianda.

Last season, she made her Broadway debut in Born Yesterday, filling the legendary shoes of Judy Holliday quite credibly. Now, she returns to a new work, a darkly comic two-character piece that she originated a year and a half ago off-Broadway.

Arianda plays an actress who bursts into a drab rehearsal room at the end of a day in which a writer-director (Hugh Dancy) has seen a parade of dreadfully untalented woman audition for his play, based on a period novel by Leopold von Sacher-Masoch, the father of masochism. Ives’ version is a series of power plays, role reversals and seductions, as the actress and her potential employer jump in and out of character in the play-within-a-play, as Arianda uses her feminine wiles and skimpy, leather outfit for their intended effect.

The play is a major leap forward for Ives, best known for light comedy sketches like All in the Timing. Still, the production belongs to Arianda, who should certainly cop her second straight Tony nomination when they are announced this Tuesday morning.

So that’s it: 12 shows in nine days. Ultimately, an above-average season for plays and a woefully disappointing one for new musicals. I’ll review the season in detail after the dust settles from the Tony nominations.

Film: Playwright August Wilson began his chronicle of the African-American experience throughout the … END_OF_DOCUMENT_TOKEN_TO_BE_REPLACED

Film: Just in time with the opening of movie theaters in Palm Beach County comes the season’s most … END_OF_DOCUMENT_TOKEN_TO_BE_REPLACED

Music: The very last concert Franz Joseph Haydn attended in his life was in March 1808, about a year … END_OF_DOCUMENT_TOKEN_TO_BE_REPLACED