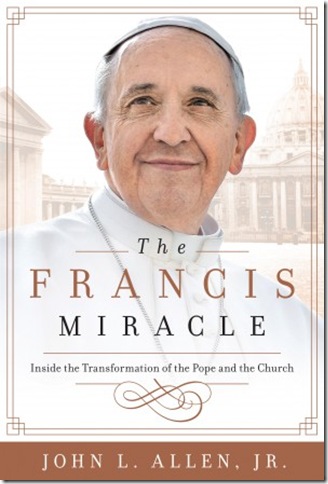 Pope Francis has impressed Catholics and non-Catholics alike with his displays of compassion and kindness for the less fortunate.

Many will recall that on Holy Thursday in 2013 Francis visited an Italian youth prison, where he said Mass and washed the feet of 12 young inmates, including a Muslim boy and two girls, one a Catholic and the other a Muslim. It was the first time that a pope had included women and non-Christians in this ancient rite, which dates back to Jesus’s washing the feet of his apostles.

Jorge Mario Bergoglio, who hails from Argentina, became the first pope from the developing world as well as the first Jesuit pope when a papal conclave elected him to lead the Catholic Church two years ago.

John L. Allen Jr. is well-qualified to write this book. For 16 years he was the Rome correspondent for the U.S.-based National Catholic Reporter newspaper. He also has written books about the Vatican and is currently a Catholic columnist for The Boston Globe.

Although Pope Francis is eager to move the church toward deeper social engagement, he is bound by centuries of tradition and teachings. A perfect example involves divorce. Catholics who divorce and remarry without an annulment of their first marriage are barred from the sacraments, including communion.

When an Argentine woman told Francis that her husband had divorced her and then remarried, and that her parish priest would no longer give her communion, Francis advised her to go to a different parish. To the chagrin of conservatives, the pope is trying to find a middle ground between upholding doctrine, while also finding ways to include divorced Catholics in the sacramental life, even as in this case if it means overturning centuries of fixed beliefs.

The book includes chapters on priests who sexually abuse children, the evolving role of women in the church and the pope’s commitment to interfaith dialogue. When Francis traveled to Israel and Palestine last year, he was joined by a Muslim and a rabbi, marking the first time that a pope had included non-Christian representatives in his travel entourage.

People likely will feel revulsion when reading about the countless children who were sexually abused by priests. When he was an archbishop and later a cardinal in Argentina, the future pope seemed to be stone-deaf to the problem. Even as pope, he took more than a year to meet with victims, although he has since acted to remove abusers from the priesthood and hold bishops accountable.

Francis has closed the door on allowing women to become priests, while also favoring a greater role for women in the church. He argues that admitting women to the priesthood would merely feed, in Allen’s words, “the mistaken notion that clerics are what’s most important about Catholicism.” Francis asserts that women do not need titles to have influence.

That said, it is noteworthy and discouraging to many people that Francis had not named a single woman to a key position in the Vatican in his first two years as pope.

Allen says Francis “wants to be a change agent, a historic reformer who reorients the Catholic Church decisively across multiple fronts.” It is too early to say what long-term influence Francis will wield. He recently surprised many people by saying he might continue as pope for only a few more years.

Although the book includes colorful anecdotes about Francis, it too often veers into minor disputes that might be of interest to devout Catholics, but not to the general public.

More important, despite Allen’s detailed reporting about this rock star-style pope, we come away from these pages thinking that we have an incomplete picture. Something is missing. What is truly in the heart and soul of this beloved church leader? In other words, what motivates Francis at a deep level?

The Francis Miracle: Inside the Transformation of the Pope and the Church; by John L. Allen Jr.; Time Books, 276 pp., $27

Film: Playwright August Wilson began his chronicle of the African-American experience throughout the … END_OF_DOCUMENT_TOKEN_TO_BE_REPLACED

Film: Just in time with the opening of movie theaters in Palm Beach County comes the season’s most … END_OF_DOCUMENT_TOKEN_TO_BE_REPLACED

Music: The very last concert Franz Joseph Haydn attended in his life was in March 1808, about a year … END_OF_DOCUMENT_TOKEN_TO_BE_REPLACED