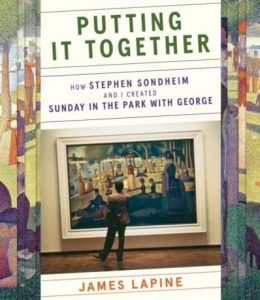 When encountering a fully satisfying musical, it is hard to imagine the difficulties it endured on its way to Broadway. Think of Fiddler on the Roof or Hello, Dolly! – both a shambles in their out-of-town tryouts – or virtually every show by Stephen Sondheim, the musical theater’s pre-eminent composer-lyricist, notoriously slow in completing each score.

Such is certainly the case with Sunday in the Park With George, Sondheim’s 1984 collaboration with James Lapine, that theatergoers were leaving in droves during its incomplete workshop production at off-Broadway’s Playwrights Horizons. Still, it went on to earn the Pulitzer Prize for Drama in its subsequent Broadway form.

Now, as the musical’s 40th anniversary approaches, Lapine – who wrote the show’s libretto and directed its original production – looks back on its tumultuous genesis in a new book, Putting It Together: How Stephen Sondheim and I Created ‘Sunday in the Park With George’.

It consists of a series of interviews conducted by Lapine with the creative forces behind the show, from tangential to central – from the creator of its logo and poster to the cast members, even those who fell by the wayside before Sunday’s Broadway opening and, of course, Sondheim.

To read the entertaining but alarming accounts of early off-Broadway performances – crew members had already dubbed it “Sunday in the Dark and Bored” – one would expect the show to close in its opening week if not opening night. But the way that it incrementally improved, plus the arrival of two crucial second-act songs, “Children and Art” and “Lesson #8,” in the final week of Broadway previews, cemented its path to ultimate triumph.

As even Lapine readily concedes, he was a strange choice to collaborate with Sondheim. His background was stronger in graphic design than theater. He had only seen one Sondheim show – Sweeney Todd, though he did see it three times – and he had never worked on Broadway and knew nothing of its arcane but intractable union rules.

Nevertheless, Sondheim had seen one of Lapine’s off-Broadway plays – Twelve Dreams, a performance piece based on Carl Jung’s theory of the collective unconscious – and was intrigued enough to invite him to his Turtle Bay home to discuss ideas for his next musical. (That alone was miraculous, coming soon after the gleefully panned Merrily We Roll Along, which had Sondheim contemplating giving up writing for the theater entirely, perhaps to construct video games.)

Lapine, 20 years Sondheim’s junior, knew little of the composer-lyricist’s work, but he knew enough to be awed in his presence. Sondheim, however, put Lapine at ease as they smoked a joint together and chatted on a variety of topics.

Lapine is largely inspired by visual images and on their next meeting he brought with him a postcard of one of his favorite paintings, Georges Seurat’s A Sunday Afternoon on the Island of La Grand Jatte, a Parisian park populated by a variety of anonymous souls, none of whom are looking at each other. That was intriguing enough, but it was when Lapine noted offhandedly that the main character was missing – the artist – that was when they saw the potential for a musical. Thus began their two-year odyssey that resulted in Sunday in the Park with George.

Understandably, Sondheim is the main character in Putting It Together, but many others emerge through Lapine’s interviews. There’s Mandy Patinkin, who originated the role of Seurat (and in the second act, his fictional great-grandson, a maker of sound and light constructions). Patinkin grew increasingly anxious as opening night approached without those crucial songs, so much so that he stormed out of rehearsals and had to be coaxed back by his actress-wife, Kathryn Grody.

Then there’s a pre-Frasier Kelsey Grammer, who quit the show during the Playwrights Horizons workshop because Lapine kept mixing up upstage from downstage. And the late Edward Kleban (himself a Pulitzer winner for A Chorus Line), who keeps popping up threatening to sue Lapine and Sondheim for plagiarism for perceived similarities between Sunday in the Park and his own play Gallery, about art and artists.

For its insights into the creative process and its dishy gossip alike, Putting It Together is a must-read for Sondheim fanatics, musical theater fans and anyone intrigued by the human psyche under pressure. I wouldn’t want it to get in the way of any new plays or musicals he may be cooking up, but could we please have a companion book on Into the Woods, Mr. Lapine?

Putting It Together: How Stephen Sondheim and I Created ‘Sunday in the Park With George,’ by James Lapine. 390 pages. Farrar, Straus, and Giroux. $40.

Film: Playwright August Wilson began his chronicle of the African-American experience throughout the … END_OF_DOCUMENT_TOKEN_TO_BE_REPLACED

Film: Just in time with the opening of movie theaters in Palm Beach County comes the season’s most … END_OF_DOCUMENT_TOKEN_TO_BE_REPLACED

Music: The very last concert Franz Joseph Haydn attended in his life was in March 1808, about a year … END_OF_DOCUMENT_TOKEN_TO_BE_REPLACED