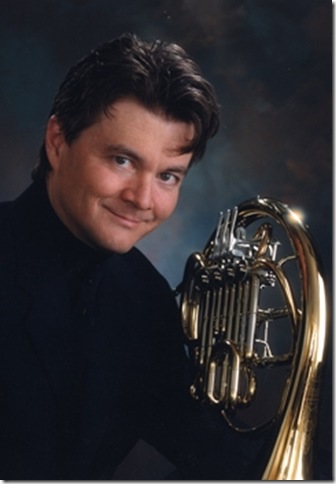 The richness of Mozart’s oeuvre can’t be fully appreciated unless you’re able to hear good performances of every part of it, from his church sonatas to his first attempts at opera.

That applies, too, to his chamber music. While performances of the later string quartets and quintets are frequent, and the Clarinet Quintet always gets an airing when a good enough clarinetist is available, it’s not often that you hear the Horn Quintet, probably because good hornists are even harder to find than good clarinetists.

This past Sunday, the Mainly Mozart Festival featured the Miami-based Bergonzi Quartet, long in residence at the University of Miami, along with UM horn professor Richard Todd, in a performance of this quintet (in E-flat, K. 407). Also on the program were Schubert’s Death and the Maiden Quartet (No. 14 in D minor, D. 810), and an early work by the Romanian composer and violinist Georges Enescu.

The Horn Quintet is a splendid piece, almost the equal of the Clarinet Quintet, and much too rarely heard. Todd and the Bergonzis – with second violinist Scott Flavin taking up the viola for the score, which calls for two of them, the other being quartet violist Pamela McConnell – did a good job of bringing it off in their well-attended performance at the Granada Ballroom of the Biltmore Hotel in Coral Gables.

Few instruments are as fraught with potential for noticeable error as the horn, and Todd had his — clamettes, we’ll call them — most notably the opening note of the finale, which wasn’t quite there. But he is a very fine player, with a big, rich tone and impressive technique. He also knows how to blend in well with his fellow players, not overplaying or pushing it, but working hand-in-glove with his string compatriots.

The first movement had a very pleasant, easeful sound, with good tempi and an emphasis on the music’s melodic warmth. This extended to the lovely second movement as well, with strong playing from all five players, but it was also surface-pretty, without much of the depth that’s here in the shifting harmonies underneath Mozart’s deceptively simple primary theme.

The Rondo finale is the movement that most sounds like the mini-concerto this quintet is often compared to, with its bubbly extroverted solo part and enthusiastic answering from the strings. Todd and the Bergonzis (there’s a nice name for a rock band) gave it just the right feeling of high spirits to end the quintet with a smile. 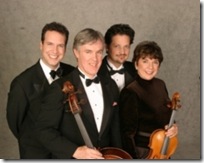 The other major work on the program, Schubert’s Death and the Maiden Quartet, is frequently programmed, and it represents a challenge each time for its length, difficulty and uncompromising musical language. It never fails to excite an audience, though, and it certainly did on Sunday, with a standing ovation and multiple curtain calls at the end.

But this was also a problematic reading of the Schubert. Although the first movement began in fine fashion with the four-note motif that underlines its whole structure performed with a tension and nervousness that brought great forward drive to the music, after the opening couple minutes, ensemble started to turn shaky. First violinist Glenn Basham, who has to play a great many bars of extravagant solo work for the old-fashioned concertante style in which Schubert cast much of this quartet, too often was imprecise, especially in intonation. But most of all, it sounded like work, and it affected the rest of the ensemble.

The same thing was true in the second movement, which opened beautifully, with a hushed, intimate reading of the song on which Schubert based the music for this movement. But as the music progressed, and despite some lovely playing from cellist Ross Harbaugh, it again lost shape, with Basham effortfully laboring away and the other three Bergonzis looking for balance.

The third movement was better in this regard, with a tightly argued, forceful scherzo section, though the trio brought us right back to sketchy territory; the music doesn’t really work unless the top violin part is spotless. It’s supposed to sound like it’s an elegant, delicate improvisation on the music, and it can’t unless it’s right on the money.

The finale, on the other hand, was a different story. The quartet took this very quickly, though it wasn’t able to keep up the pace all the way through; it was noticeably slower on the first recapitulation of the opening measures. But it didn’t matter much, because here the quartet sounded as though it had practiced this movement intensively, and it showed. The music had a thrilling, coiled-snake power that had the large ballroom audience snapping to attention, and the Bergonizs had good reason to look pleased after coming to its forceful conclusion.

The concert opened with a brief appearance by a 16-year-old Romanian violinist, Tinca Belinschi, who played the Aubade of her countryman Enescu, written when the composer, too, was in his teens. Belinschi, a junior at West Palm’s Dreyfoos School of the Arts, was accompanied by Flavin and Harbaugh in a string trio version of this charming, tuneful morning song. Belinschi, a young artist-in-residence at the festival, is a fine player, with a confident sound and easy command of this music’s technical difficulties.

Film: Playwright August Wilson began his chronicle of the African-American experience throughout the … END_OF_DOCUMENT_TOKEN_TO_BE_REPLACED

Film: Just in time with the opening of movie theaters in Palm Beach County comes the season’s most … END_OF_DOCUMENT_TOKEN_TO_BE_REPLACED

Music: The very last concert Franz Joseph Haydn attended in his life was in March 1808, about a year … END_OF_DOCUMENT_TOKEN_TO_BE_REPLACED