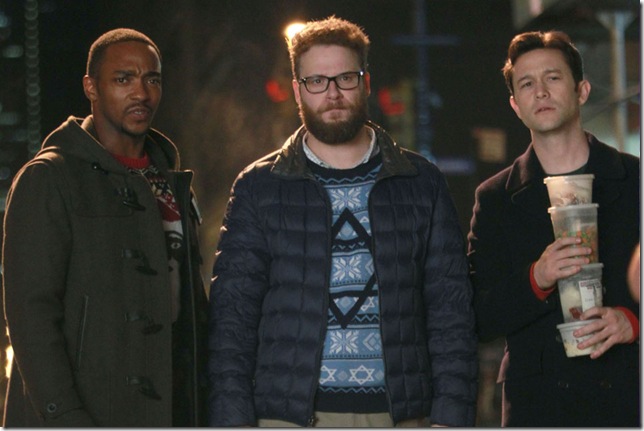 Jonathan Levine’s The Night Before runs only 99 minutes, but it feels considerably longer — so chockablock is this anarcho-buddy-stoner-road-Christmas-comedy with quips, gags, references, elaborate set pieces, and most of all ideas.

It’s amazing how many of them work. Few comedies in recent memory measure up to middle hour of The Night Before in its hedonistic inspiration, its rat-a-tat barrage of brilliant material, one joke colliding into the next like stampeding bulls. Levine barely allows us time to process the last one before it’s usurped by another uproarious line or shot or edit. The fact that such a streak proves narratively unsustainable is the movie’s only unfortunate hiccup.

Levine, who directed Joseph Gordon-Levitt and Seth Rogen in the canny cancer comedy 50/50, pairs them again, along with Anthony Mackie, as a trio of longtime BFFs gradually accepting adulthood. Some are more successful than others: As a teenager, Gordon-Levitt’s Ethan lost his parents to a drunken driver one Christmas Eve, and as a 33-year-old man, his life is a shambles, from a floundering music career to a relationship severed because of his inability to commit. Rogen’s Isaac is a married lawyer anticipating his first child, and the anxieties associated with fatherhood boil underneath an ersatz calm. Mackie’s Chris is a solipsistic, late-blooming professional football player who dopes to keep up with his more gifted teammates.

For the past 14 years, ever since Ethan found himself orphaned, these three buddies have maintained a hard-partying Christmas Eve tradition — bad holiday sweaters, mediocre Chinese food, choreographed karaoke and a visit to the foot piano at FAO Schwarz, a la Big. It’s an era that is finally ending: With life changes looming, from parenthood to increased fame and responsibility, Chris and Isaac have agreed to one last Xmas Eve rager with their wayward friend.

Which is all preamble, really, for The Night Before’s raison d’etre, a surreal nocturnal odyssey that involves everything from magic mushrooms to a hilarious case of mistaken cellphones to a blasphemously inappropriate midnight Mass and a few priceless cameos from Michael Shannon as a cryptic drug dealer. Much of the humor is geared toward audiences of Rogen’s generation, the not–quite-Gen-Xers who grew up in the ’80s. References abound to films ranging from The Shining to Die Hard to Home Alone. Its magical tone and tinsel-dusted musical score self-consciously reference the cheese and corn of Christmas movies past, where miracles trump logic.

Occasional sincerity cuts through the haze of Yuletide debauchery, and it’s a welcome reprieve from the gut-busting folderol — at least until The Night Before’s studied irony acquiesces to hokey genuineness. This is why the final act is so regrettable. Unlike other Rogen genre-parody vehicles, from the winking action-adventure of Pineapple Express to the post-apocalyptic bacchanal This is the End, The Night Before finally plays its hand. It finds itself all too captured by the Dickensian spirit of the season, tying up every loose narrative end like presents under a tree. In the movie’s twisted framework, we can easily accept a reindeer-drawn sleigh materializing in the middle of Manhattan; human beings suddenly wiping clean months or years of hurt for storybook convenience is cripplingly implausible.

But the sentimental third-act fumbles of The Night Before don’t erase the certifiable genius that preceded it. In sheer laughs alone, it certainly tops this year’s Trainwreck or Spy or Ted 2, and even 2014’s outrageous Top Five. It’s quite possible that this is the funniest film in years. In that case, God bless us, everyone!

Film: Playwright August Wilson began his chronicle of the African-American experience throughout the … END_OF_DOCUMENT_TOKEN_TO_BE_REPLACED

Film: Just in time with the opening of movie theaters in Palm Beach County comes the season’s most … END_OF_DOCUMENT_TOKEN_TO_BE_REPLACED

Music: The very last concert Franz Joseph Haydn attended in his life was in March 1808, about a year … END_OF_DOCUMENT_TOKEN_TO_BE_REPLACED