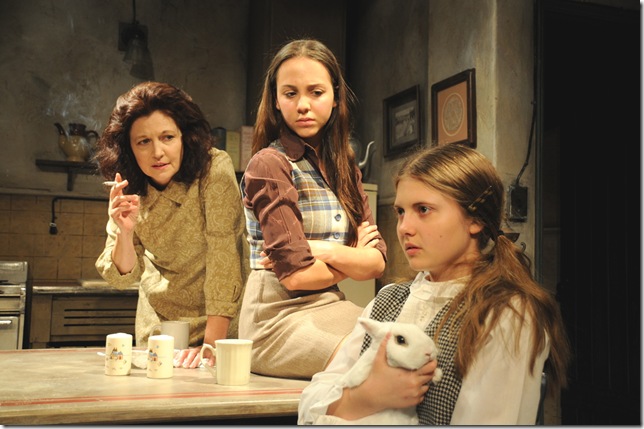 Arielle Hoffman always knew that she wanted to be an actress. After all, theater is the family business.

The 17-year-old daughter of South Florida fixtures Laura Turnbull and Avi Hoffman grew up thinking the odd hours, feast-or-famine, histrionic life of stage performers was normal. “I didn’t know that this was unusual or weird,” she shrugs. “I just had no idea that people had regular jobs.”

This weekend, the Hoffman family’s elder daughter, a high school senior, has a rite of passage. She will make her professional stage debut at Palm Beach Dramaworks, playing opposite her mother in Paul Zindel’s Pulitzer Prize-winner, The Effect of Gamma Rays on Man-in-the-Moon Marigolds.

Appropriately, they play mother and daughter, but that is where the similarity ends. Turnbull plays embittered, alcoholic divorcee Beatrice Hunsdorfer, who takes her disappointments with life out on her daughters, Ruth and Tillie. Hoffman plays introverted Tillie, who reacts to the verbal and emotional abuse by crawling into her protective shell.

In real life, the two actresses have a great relationship. “Characters like her have so many issues and have so much underlying who-knows-what. It’s just more challenging, to play someone that I truly am not like,” says Turnbull. “Because she’s just such a horrible human being, (she) is more fun to play than the people who are nice, the Donna Reed, everything-is-wonderful types. For me, it’s a challenge to not be the kind of mom I am. I love my kids. I am so proud of them.”

For vivacious, gregarious Hoffman, it is a relief to play characters unlike themselves. “I think it would be really hard if it were closer to how it was in real life. If, in reality, we had a relationship that wasn’t good, if we didn’t get along. She calls me ‘ugly’ several times in the play. If that’s how I knew she felt in real life, I couldn’t do it night after night.”

First produced in 1964, but revived infrequently, Gamma Rays is exactly the sort of play Palm Beach Dramaworks relishes. Turnbull has never seen it performed but has been aware of the script since her high school days.

“As kids, we knew some of the monologues and we’d do them in auditions,’ she recalls. “The last time I read it I was younger and I didn’t have kids, so I see it now from a whole different perspective. Looking at it now as an actor, I couldn’t wait to get my teeth into it, to mine everything that’s there.”

Hoffman was unfamiliar with the play, but she seems undaunted by it. Asked what she feels is the biggest challenge for her, she mentions the other demands on her time. “There is the challenge of working this into my life as a high school student,” she replies. “This is what I want to spend my time doing, but unfortunately I have college applications and homework that I have to get done.”

Gamma Rays is a textbook dysfunctional family play, but with an eventual upbeat message. “That although life deals you what it deals you, and everyone handles certain situations in their own way, there is the possibility of coming out from underneath it all,” says Turnbull. “That hope can remain somewhere out there. Not for my character necessarily, not for my other daughter necessarily, but for Tillie.”

“I think the meaning is pretty easily described by the metaphor, that the plants closest to the radiation die,” adds Hoffman. “And the ones on the outside that got the littlest radiation had the most beautiful mutation and grew to be tall and gorgeous. Tillie is the positive mutation. Although she is in the same situation as her mom and her sister, she is coming out of it because of how she thinks about the world. She will be OK.”

Film: Playwright August Wilson began his chronicle of the African-American experience throughout the … END_OF_DOCUMENT_TOKEN_TO_BE_REPLACED

Film: Just in time with the opening of movie theaters in Palm Beach County comes the season’s most … END_OF_DOCUMENT_TOKEN_TO_BE_REPLACED

Music: The very last concert Franz Joseph Haydn attended in his life was in March 1808, about a year … END_OF_DOCUMENT_TOKEN_TO_BE_REPLACED