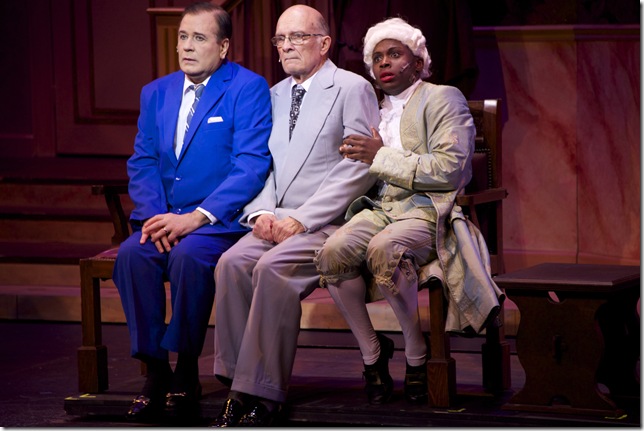 Only an incurable optimist like Jerry Herman would write that “The best of times is now,” as he did in his enduring hit musical, La Cage aux Folles. He wrote it in 1983, in the midst of the Reagan administration, as the AIDS epidemic was on the increase. That’s how much of an optimist he is.­­

The song appears in the first gay-themed musical to hit Broadway, a number that still gets audiences singing and clapping along, as the production at The Wick Theatre attests. The crowd-pleasing show does not require star names, but that is the Boca Raton company’s bent lately and the production is certainly given a boost by the talents of Broadway veterans Walter Charles and Lee Roy Reams as St. Tropez nightclub owner Georges and his longtime partner and drag queen headliner, Albin/Zaza.

The once-groundbreaking show seems more tame today, but it still packs an emotional wallop as the gay couple’s grown son learns to appreciate his unconventional parents.

Reams has played his showy role hundreds of times, wearing it as comfortably as the glittery gowns he dons. By the time he gets to the title number, he has the audience eating out of his hand, so much so that it willingly follows him as he adds bits from his concert act, including impersonations of Mae West, Tallulah Bankhead and Marlene Dietrich.

As “plain homosexual” Georges, Charles plays, um, straight man to Reams, and their chemistry together is palpable. He looks awfully frail, but when the music starts (on either the wistful “Song on the Sand” or the admonishing “Look Over There,” for instance), he comes alive with vocal power to spare.

Backing up Zaza in his club act, and often commanding the stage with acrobatic hijinks, are the Cagelles – six androgynous men and a couple of women, all similarly garbed – an energetic ensemble that executes director Norb Joerder’s kick lines, splits and cartwheels with giddy abandon.

Among the large cast, other standouts include Phil Young as Georges and Albin’s sassy maid Jacob, Aaron Young as their ungrateful son, and an amusing Angie Radosh as the mousy wife of a right-wing politician who breaks out of her shell.

The chief constant at The Wick is its Broadway-quality costumes, in this case based on Theoni V. Aldredge’s original New York designs. The production delivers on all levels, though, not just the boas and bugle beads, and thanks to Reams and Charles, it is a show worth seeing again, with messages worth hearing once more.

Film: Playwright August Wilson began his chronicle of the African-American experience throughout the … END_OF_DOCUMENT_TOKEN_TO_BE_REPLACED

Film: Just in time with the opening of movie theaters in Palm Beach County comes the season’s most … END_OF_DOCUMENT_TOKEN_TO_BE_REPLACED

Music: The very last concert Franz Joseph Haydn attended in his life was in March 1808, about a year … END_OF_DOCUMENT_TOKEN_TO_BE_REPLACED