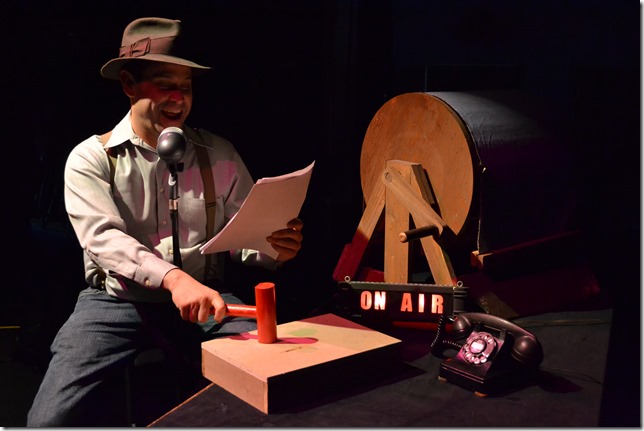 Long before television ruled the airwaves, radio was king, including theater broadcasts complete with the aural authenticity of live sound effects.

And since everything old is new again, radio theater lives again, thanks to public station WLRN and Arts Radio Network Theatre Project, the brainchild of John Watts and Caroline Breder-Watts. They will be producing three science fiction scripts at Delray Beach’s Crest Theatre this summer, beginning with the 1951 classic, The Day the Earth Stood Still, tonight.

The Wattses have been producing radio theater since 2002, initially for WXEL, where they both worked. The station was always in search of fundraising ideas, “So we proposed to management that we do a ‘War of the Worlds’ broadcast, on Halloween night,” recalls Breder-Watts. They continued to tinker with the format and the program really took off in 2013 at the Arts Garage.

Then-artistic director Lou Tyrrell was featuring a Judy Garland bioplay, Beyond the Rainbow, and he invited the Wattses to create a radio production of A Star is Born. “It was so successful, they brought us in to do a series that year and we were there for, I think, three years,” she says.

They later expanded to doing radio plays at the Kravis Center, which were subsequently broadcast on WLRN radio. By now, the station has contracted them to perform in the four South Florida counties of its audience, which has led to the Crest series, which will also be aired on WLRN.

“We’re really creating this for two very different audiences,” explains Breder-Watts. “You have to be able to close your eyes and hear it with only your ears. But if you’re in the audience, you want it to also be visually interesting. So we’ve added costumes, prop pieces and the live sound effects. It’s still not memorized, the actors still have scripts in hand. Done the way traditional radio theater was done, but with a little added flair.”

The scripts mainly come from Lux Radio Theatre, which regularly broadcast one-hour adaptations of popular movies of the 1950s. Fortunately for the Wattses, they are in public domain, because no one thought there was a value in copyrighting radio plays.

“The other reason we do them is the Lux Radio commercials, which are so incredibly silly,” concedes Breder-Watts. “They are the actual commercials, and people get such a kick out of them.”

The other prime appeal for the live audience is watching the sound effects, which are specified in the script. “But what it doesn’t have is a description of how you make that sound. The fun of it for John is to research these old sound effects, so he can recreate them as authentically as he can,” she says. “When we need a car door slamming, we literally have a car door on a big frame that we can open and close. When we need the sound of the wind, we use one of those old hand-crank wind machines. John has a whole warehouse full of these things.” Handling the effects is Daniel Eilola, artistic director of Lake Worth’s Stonzek Studio Theatre.

Breder-Watts describes herself as a “science fiction nerd,” particularly vintage sci-fi movies. The Day the Earth Stood Still (performed at 7:30 p.m. today, broadcast July 10 at 7 p.m.) “fits in well with our political climate,” she says, with its theme of mistrust of outsiders. Next up is War of the Worlds (performed July 15 at 7:30 p.m., broadcast Aug. 4 at 7 p.m.), based on the script by Orson Welles’ Mercury Theatre that allegedly caused an East Coast panic in 1938, “probably the most done of all the radio plays.”

The final production is Ed Wood’s distinctly cheesy Plan 9 From Outer Space (Aug. 5 at 7:30 p.m., Sept. 11 at 7 p.m.). Released in 1959, after Lux Radio Theatre’s demise, it has been adapted for the stage by local actor-playwright Dan Leonard.

So check out WLRN Radio Theater’s Sci-Fi Summer and see why it has such an avid following. “It’s an amazing art form. If you’re a movie fan, if you’re a theater fan, it’s the best of both worlds,” she says. “It’s got these sound effects, it’s got actors doing multiple roles and, frankly, you’re in and out in an hour.”

Film: Playwright August Wilson began his chronicle of the African-American experience throughout the … END_OF_DOCUMENT_TOKEN_TO_BE_REPLACED

Film: Just in time with the opening of movie theaters in Palm Beach County comes the season’s most … END_OF_DOCUMENT_TOKEN_TO_BE_REPLACED

Music: The very last concert Franz Joseph Haydn attended in his life was in March 1808, about a year … END_OF_DOCUMENT_TOKEN_TO_BE_REPLACED