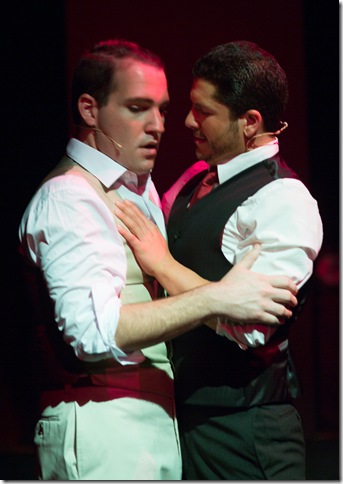 The year was 1924, but the “thrill killing” of a 14-year-old boy by Nathan Leopold and Richard Loeb was so brutal and senseless that it was already being labeled “the crime of the century.”

Over time, the case would continue to capture the nation’s imagination, in Alfred Hitchcock’s film Rope, Ira Levin’s novel Compulsion and John Logan’s play Never the Sinner. And most recently in Thrill Me: The Leopold & Loeb Story, composer-lyricist-playwright Stephen Dolginoff asks, “Why not a musical?”

Indeed, boiled down to its two-character essentials and then heightened with the impact of music, Thrill Me is a creepy experience, a description that would surely please Dolginoff. He would also be pleased, I suspect, by the production at Outré Theatre Company in Boca Raton, a stark, chilling presentation, thanks to the dead-on performances of Mike Westrich (Leopold) and Conor Walton (Loeb) and the assured, minimalist direction by Outré’s artistic director, Skye Whitcomb.

Both real-life characters were born to wealth, with too much time and money on their hands. And in the case of Loeb, he is drawn to the writings of Nietzsche, which leads him to believe that he is a superior being, above the laws of man. As depicted here, Leopold is drawn to Loeb on a sexual level, a weakness that Loeb uses to exact a contract, signed in blood, that the two of them will be jointly committed to a life of crime.

When the thrill of robbery wears off, Loeb gets it in his head that murder must be next. In a song of icy calm — an understated tour-de-force for Walton — he proposes that they kill his own brother, then mercurially changes his mind to opt for a random homicide. And little Bobby Franks, in the wrong place at the wrong time, becomes their victim.

Events are narrated in flashback by Leopold from the vantage point of 1958, his fifth parole hearing, in which he dredges up oft-told memories of his relationship with Loeb, the murder and their trial, defended by the wily Clarence Darrow — the best lawyer money could buy — who maneuvered them away from the death penalty. Westrich carries much of the storytelling burden and is very effective, but it is Walton who is particularly unnerving, creeping onto the stage in Leopold’s mind.

Dolginoff’s score has a period feel and a dramatic insistence, showcasing the two performers’ sweet, fevered harmonies on duets. Kristen Long accompanies on keyboard very effectively, with simple arrangements that keep the focus on the two voices.

Whitcomb stages Thrill Me with unflinching assurance and deadly unease. In its short past, Outré has overreached with some of its show choices, but this unnerving chamber musical plays to the company’s strengths and suggests the dramatic power of which the troupe is capable.

Film: Playwright August Wilson began his chronicle of the African-American experience throughout the … END_OF_DOCUMENT_TOKEN_TO_BE_REPLACED

Film: Just in time with the opening of movie theaters in Palm Beach County comes the season’s most … END_OF_DOCUMENT_TOKEN_TO_BE_REPLACED

Music: The very last concert Franz Joseph Haydn attended in his life was in March 1808, about a year … END_OF_DOCUMENT_TOKEN_TO_BE_REPLACED