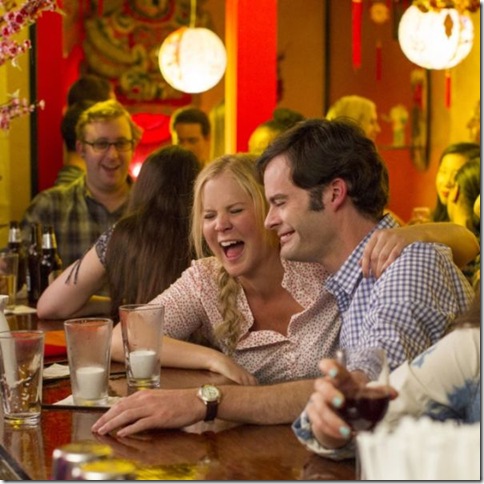 Judd Apatow and Amy Schumer have balls. After all, they should know that any movie that dares to title itself Trainwreck is begging for smug derision from lazy critics, the Shalits and Reeds and Traverses of the waning print dynasties and the bloated blogosphere, who can now summon their most tired rail-travel metaphors or come up with gems such as “the title says it all.”

The worst thing I can say about the title is its anonymity. It sounds like a direct-to-video Jenny McCarthy vehicle, the kind of bold-font brain-cell-destroyer that used to take Blockbuster shelf space away from Palme d’Or winners. But if anonymity is what the show’s talented director and writer are going for — if filtering their auteurist talents and idiosyncrasies through the rusty spigot of Hollywood rom-com formula is the goal — they’ve achieved it.

Given that Schumer is such a necessary presence in our culture, it’s disappointing to report that Trainwreck, though written by Schumer, isn’t the proper big-screen introduction to late-night comedy’s enfant terrible. She stills plays a selfish, oversexed middle-class narcissist named Amy, but Trainwreck is far from the Amy Schumer Sketch Movie — would that it were, provocatively pushing her shock-jockette humor into hard-R territories. But her unshackled id doesn’t get to frolic nearly enough. Eventually, sentiment overtakes the raunch, and Trainwreck becomes the predictable romance it was satirizing. Hemmed in by such familiar mechanics, Schumer has produced a piece of entertainment that (prepare your gag reflex) panders to a mainstream audience.

Schumer’s Amy avatar this time around is a commitment-phobic sex addict who says casually monstrous things to strangers and loved ones alike, and who works at a misogynist magazine called S’Nuff, edited by a customarily unrecognizable Tilda Swinton. After vocally disparaging all things sports during a staff meeting, she’s promptly assigned to profile a groundbreaking, charitable and charmingly square sports physician named Aaron Conners (Bill Hader). She soon takes her subject to bed, because that’s what she does, but when Aaron doesn’t want to leave — and when he calls her the next day! — we may just witness the start of Amy’s domestication.

You’ve seen this movie before. Usually it’s about a callous male playboy mistaking sexuality for intimacy until he finally meets the match who will anchor his libido: Nuclear suburbia awaits just before the end credits. Simply inverting the genders in this formula doesn’t alter its fundamental ingredients, which we’ve been spoon-fed in romantic comedies for decades.

Much of this would be acceptable if the film were funnier. Apatow’s movie breakthrough, The 40-Year-Old Virgin, for instance, reinvents few wheels but remains forever inspired, with believable characters and dialogue that, no matter how absurd, still sounds convincing. In Trainwreck, people just say stuff for a laugh, even if it means, particularly for Hader’s saintly straight man, abandoning the authenticity of his character. The result, when held up to recent studio comedies, is neither as subversively clever as Spy nor as gonzo-funny as Ted 2 (yes, really). I laughed more during Ant-Man, actually.

When Trainwreck shifts from comedy to tragedy, it fares uniformly well. A touching funeral scene offers a new, vulnerable pathway inside Amy Schumer, successfully pushing her into previously unexplored realms of dramatic acting.

But the best part about Trainwreck is a total surprise, and I expect even the film’s defenders will concede this. It’s LeBron James, who, as a patient of Aaron’s, plays himself as a sensitive penny-pincher who speaks like a philosopher-poet, watches Downton Abbey, refuses to pick up the bill at restaurants, and holds emotional interventions for his close friends. Miami Heat fans will forever despise this turncoat, which is understandable, but if you can put aside your bias, you’ll find that James possesses arguably the strongest comic timing and delivery in the movie.

Even James’s appearances, however, represent one joke repeated again and again —the joke of the athlete who is nothing you expect him to be — but it’s performed with a rainbow of variations. Unlike the script and direction, there’s nothing phoned-in about it.

Film: Playwright August Wilson began his chronicle of the African-American experience throughout the … END_OF_DOCUMENT_TOKEN_TO_BE_REPLACED

Film: Just in time with the opening of movie theaters in Palm Beach County comes the season’s most … END_OF_DOCUMENT_TOKEN_TO_BE_REPLACED

Music: The very last concert Franz Joseph Haydn attended in his life was in March 1808, about a year … END_OF_DOCUMENT_TOKEN_TO_BE_REPLACED