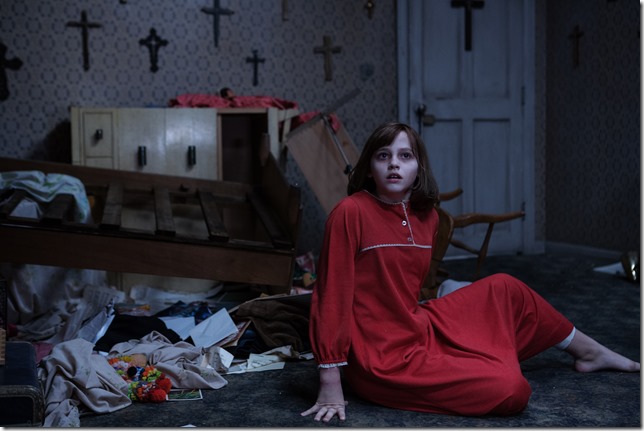 Madison Wolfe in The Conjuring 2.

The visual and aural infrastructure of James Wan’s The Conjuring 2 is as familiar as sense memory — the creak of doors, the china that flies across the room, the autonomous movements of a rocking chair, electronics on the fritz, close-ups of teary children cowering under covers.

If we haven’t seen this specific movie before, we’ve ingested its constituent parts time and again, and can identify the provenance of its many echoes: a little Exorcist here, some Poltergeist and The Haunting there, a dash of The Babadook here and a healthy dollop of Wan’s own Insidious over there.

Wan’s latest film may be nostalgic and reverential, but these are hardly criticisms. He’s once again given these conventional mechanics a jolting tune-up. Buttressed by its claims of real-life documentation, The Conjuring 2’s revisiting of a notorious 1977 London poltergeist is an effectively excruciating accumulation of tension.

After screenwriters Chad and Carey Hayes, Wan and David Leslie Johnson get all the regional colloquialisms out of their system — “wanker,” rubbish,” “biscuits” and “sod” are uttered in their initial few veddy-British scenes — The Conjuring 2 settles into its harrowing groove. It runs unusually long for a horror sequel, at 134 minutes, a good 20 minutes more than its predecessor, but every second feels important.

By the time the film’s ostensible leads, demonologists Ed and Lorraine Warren (Patrick Wilson and Vera Farmiga), first appear at the Enfield council house, we’re already sold on the validity of the case, having spent an hour of terrifying deliberation under the haunted-cum-possessed gaze of 11-year-old Janet Hodgson (Madison Wolfe), whose family is terrorized by the lingering ghost of a 72-year-old former resident.

The Warrens didn’t seek this case out — far from it. Lorraine, as the movie presents her, had been so traumatized by recent exorcisms that she pleads her husband to hang up their crosses and equipment, at least for a while. We can see why: The film opens with the flogging of an admittedly dead horse — the Amityville slayings — but it’s a chilling sequence, full of slow, creepy zooms and canted angles, as Lorraine, through a séance, astral-travels into the soul of Ronald DeFeo Jr. as he butchers his family. It would be enough to turn anyone off the demon game for a wee bit.

They’re pulled back in because an Enfield priest seeks out their expertise, following a continuing cascade of traumas that has baffled the local constabulary, confounded the church, intrigued the tabloid media, and persuaded local paranormal investigator and affable Gene Shalit doppelganger Maurice Gross (Simon McBurney). More so than in the original Conjuring, the Warrens’ lives and their faith — in each other, in the Hodgsons, in their chosen profession — will be tested.

Where the sequel fails is that, unlike the seemingly just-the-facts-ma’am approach of The Conjuring, this film abandons all pretense of direct reportage by the time it careens to its sensationalistic climax. But even this is redeemed by Wan’s fundamental humanism, which expands with his every film. Just when it seems to be sliding into full-throttle chaos, The Conjuring 2 relents, allowing moments of heart-swelling affection and vulnerability. What other big-budget, teen-targeting horror pic would pause the terror for an arrestingly sweet acoustic performance of “Can’t Help Falling in Love” delivered from one demonologist to another? In the next scene, Ed helps fix the Hodgsons’ plumbing.

These are everymen and –women, not ghost-busting superheroes, and today, they seem as old-fashioned as Ed’s ʼ70s sideburns. The Conjuring 2 is unafraid to be corny in an age of cynicism, and that — not its expert handling of well-worn supernatural tropes — is its boldest provocation.

Film: Just in time with the opening of movie theaters in Palm Beach County comes the season’s most … END_OF_DOCUMENT_TOKEN_TO_BE_REPLACED

Music: The very last concert Franz Joseph Haydn attended in his life was in March 1808, about a year … END_OF_DOCUMENT_TOKEN_TO_BE_REPLACED