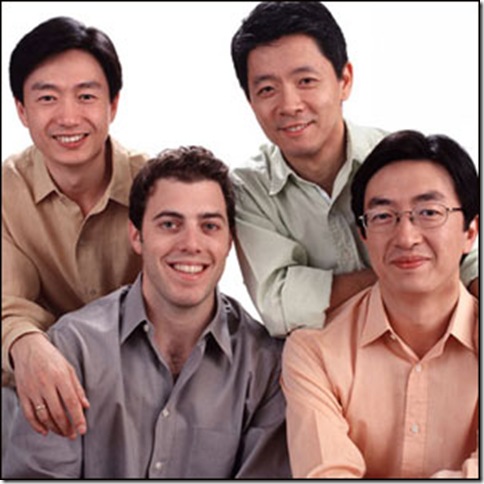 The Shanghai String Quartet opened the Flagler Museum’s chamber music series Tuesday night, and is brilliant playing from the start set this group apart from all others.

Formed in 1983, the Shanghai have a discography of 25 recordings and hold guest professorships at three universities, Montclair State in New Jersey and two in China. Leading off with Joseph Haydn’s Op. 76, No. 2 , written in 1797, we heard the notable clarity of each instrumentalist as a smooth rallentando in the Allegro moved into a fierce convulsion of the four strings, seemingly  in competition.

The Andante has the lead violin, Weigang Li, repeating the opening tune twice, with accompanied plucked chords. A singing tone is evident in his playing, something all great violinists have, according to the late Isaac Stern, who along with the ping-pong players helped “open up” China back in the Nixon administration.

A heavy emphasis on the cello, played by Nicholas Tzavaras, led the Minuetto. The second violin, Yi-Wen Jiang, and violist, Honggang Li, supplied lower-sounding dance music of folk-like origin. All together they make an amazing sound; I hardly ever remember hearing anything so majestic from a string quartet. A lively “jig” ends the movement.

Quick tempos of course open the finale, marked Vivace assai, with phrases from Haydn’s earlier symphonies. Tunes are passed around and the excellence of their playing was obvious to all.

Next came an oddity, the lone string quartet of Giuseppe Verdi.

The composer of 29 operas had to wait in Naples in 1873 while rehearsals for his opera Aida were held up due to the lead soprano’s illness. So he wrote his only string quartet “to pass the time.” I think it reflects his annoyance as an impresario at being rendered inert because it begins with what I can only describe as the turbulent waters of the Nile River Delta churning up those of the Suez Canal, for whose opening he had written Aida at the Cairo Opera House in 1872. This spirited opening is followed by some fluent graceful music in the style of Beethoven.

The second movement, marked Andantino, is softer, with tunes that progress and breed other melodies. Reminders of his opera Il Trovatore creep in as Verdi appears to have “voiced” every singing part — soprano, mezzo, tenor and bass — to reflect each string part in a singing string quartet: magical stuff. Naturally, more operatic comparisons were due for the Prestissimo, which followed: It was not unlike the Act II, scene 2 of La Traviata, when at Flora’s party Alfredo hurls money at Violetta’s feet.

The finale begins benignly enough but the ending fugue is very similar to the last bars of his opera Falstaff where the wives of Windsor meet to tease Sir John Falstaff under the shadow of Hearn’s Oak. The darkness and the mystery are there in the lower strings as is Nanetta’s lovely solo, preceding the opera by 20 years. Nothing wrong in borrowing from oneself. This quartet is what it is: a novelty by a great composer.

The final work from the Shanghai was Dvorak’s String Quartet No. 14 (in A-flat, Op. 105). This is his last quartet. Honored by the world for his music, he was appointed head of a new music conservatory in New York City in 1892. In March 1895 he began this work, shelved it and moved back to Prague. In December of the same year he completed it.

Again, it’s psychological. One senses Dvorak in the first movement trying to break loose from the claims of North America, where he wrote his Cello Concerto and the New World Symphony. It is appropriately marked Allegro appassionato and one can feel his  struggle prominent in the music. In the Molto vivace, the second part, one realizes he is back in Prague. It is vigorous, athletic, with variations on a Czech folk dance, and at times calm and relaxed with a lyricism that was carefully caressed by the string players of the Shanghai.

Long, drawn-out chords that are radiant in sound break into a gloomy theme that eventually heads towards a solo violin backed by plucked strings. This solo is picked up by the cello, who works very hard to make his rendition sound wonderful. In the Allegro non tanto, the brilliant cellist leads off at a fast pace. This finale is lively and freely developed, rich in rhythmic songs and dance melodies that rise to a massive climax.

Playing of this caliber is rarely heard. It is our good fortune that the Shanghai String Quartet were able to put Palm Beach on their schedule. Kudos to John Blades, director of the Flagler Museum, for inviting them. We trust they’ll come back soon.

Film: Playwright August Wilson began his chronicle of the African-American experience throughout the … END_OF_DOCUMENT_TOKEN_TO_BE_REPLACED

Film: Just in time with the opening of movie theaters in Palm Beach County comes the season’s most … END_OF_DOCUMENT_TOKEN_TO_BE_REPLACED

Music: The very last concert Franz Joseph Haydn attended in his life was in March 1808, about a year … END_OF_DOCUMENT_TOKEN_TO_BE_REPLACED