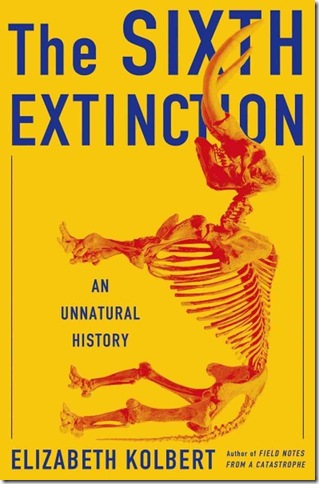 More than 60 million years ago a 6-mile-wide asteroid crashed into Earth, wiping out the dinosaurs. Four other mass extinctions in the past 450 million years destroyed countless other animal and plant species.

In her profound new book, The Sixth Extinction, science writer Elizabeth Kolbert argues that Earth could be heading for another extinction that would kill off many species.

The book traces the history of animal and plant life, noting that the concept of extinction is relatively new. Until the 1800s, people believed that all the species that ever existed were still alive. When mastodon bones were discovered in the United States in the early 1800s, Thomas Jefferson sent Lewis and Clark to the Northwest, believing they might find live mastodons.

The book delves into several alarming trends, focusing on species rapidly heading for extinction, despite sometimes heroic efforts to save them. The concern comes too late for the great auk, a 2-and-a-half-foot tall bird that could not fly. Europeans feasted on auk meat until the bird became extinct in the 1800s.

Bats, amphibians and coral reefs are among species in danger of disappearing.

“Today,” Kolbert writes, “amphibians enjoy the dubious distinction of being the world’s most endangered class of animals. … But extinction rates among many other groups are approaching amphibian levels. It is estimated that one-third of all reef-building corals, a third of all fresh-water mollusks, a third of sharks and rays, a quarter of all mammals, a fifth of all reptiles, and a sixth of all birds are headed toward oblivion.”

One major culprit is global warming. The concentration of heat-trapping carbon dioxide in the atmosphere has increased 40 percent in two centuries. The concentration is greater than at any point in the last 800,000 years. If present trends continue, CO2 will raise global temperatures as much as three-and-a-half to seven degrees Fahrenheit by mid-century.

The Sixth Extinction is not an easy read. The book is packed with so many names of threatened and extinct species that the central thread sometimes gets lost.

To her credit, Kolbert is a scrupulous researcher who includes varying viewpoints when the science is not settled. Although scientists disagree about the specific long-term effects of global warming, experts say that by the end of this century carbon dioxide in the atmosphere could reach levels not seen in 50 million years.

One of the appealing aspects of the book is Kolbert’s determination to see for herself the impact of global warming — as she dives into the ocean to examine damage to the Great Barrier Reef off Australia, walks through the Brazilian rain forest looking for vanishing bird species and treks into caves in New York state to examine the bat die-off.

The book is filled with fascinating tidbits, such as the fact that 20,000 years ago most of Canada and much of New England was covered by ice one mile thick.

Kolbert, a staff writer for The New Yorker magazine, says that Neanderthals lived in Europe for 100,000 years until the arrival of humans, who mated with them and directly or indirectly exterminated them. Most humans today carry a small percentage of Neanderthal DNA.

While many species are threatened with extinction, other species are spreading and thriving. A century ago, 100 European starlings were released in New York City’s Central Park. They have since multiplied to 200 million.

Kolbert does not say if she thinks humans will survive the sixth extinction.

This sobering book ends on an inconclusive, almost flippant note. Some scientists, we are informed, optimistically believe that if global warming becomes too grave, we can reengineer the atmosphere. If nothing works, we’ll still be OK, they say. “We’ll simply decamp to other planets.”

Music: The very last concert Franz Joseph Haydn attended in his life was in March 1808, about a year … END_OF_DOCUMENT_TOKEN_TO_BE_REPLACED

Film: Major League Baseball culminates each season with the World Series, but to find the true … END_OF_DOCUMENT_TOKEN_TO_BE_REPLACED