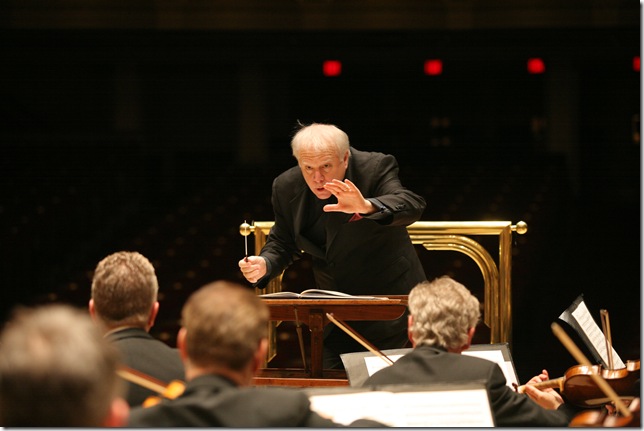 The big industrial cities of the Midwest — Minneapolis, Detroit, Chicago, Cleveland, St. Louis — grew up with the country in the mid-19th century, and added cultural institutions as they moved into the Gilded Age and the early 20th century.

The symphonic ensembles their prominent citizens brought into being have long been prized institutions, and gained importance as this region of the country started to suffer serious financial turmoil.

The American conductor Leonard Slatkin has seen some of this up close, and this week he brings his Detroit Symphony Orchestra to South Florida to demonstrate that his orchestra is alive and well even as its home city’s bankruptcy makes its way through the federal court system. Slatkin and the DSO appear tonight and tomorrow afternoon at the Kravis Center, and on Friday night at the Knight Concert Hall in the Adrienne Arsht Center in Miami.

The guest soloist is the Russian pianist Olga Kern, who will be playing repertoire from her homeland: the Rachmaninov Rhapsody on a Theme of Paganini tonight and the Prokofiev First Concerto (in D-flat, Op. 10) tomorrow afternoon, and Rachmaninov again Friday night at the Arsht’s Knight Concert Hall. Tonight’s concert also features Morton Gould’s Spirituals, and three works by Ravel: The Mother Goose Suite, the Pavane for a Dead Princess, and Boléro.

Slatkin, who has just returned from Europe giving performances with his other orchestra, France’s Orchestre National de Lyon, answered some email questions this past weekend about the DSO and its Florida tour.

To begin with, he wanted to stress the difference between Detroit’s current financial turmoil and the balance sheets of the DSO, which since its founding in 1887 has had occasional confrontations with the red bottom line, as well as a musicians’ strike in 2011.

“The DSO is not a public company and is completely independent in terms of its fiscal responsibility. We perform in one of the finest concert halls in the world and our public is loyal and constantly growing. Certainly we are affected by the bankruptcy, as the city is the place we work,” Slatkin wrote. “But after the devastating strike of three years ago, we learned how to deal with problems in an open and transparent manner. Detroit has 60 years of problems to confront. Now the city is facing the harsh realities.

“Everyone will lose something but in the long run, everyone will gain, regardless of the details of the recovery,” he wrote.

In nearby Minneapolis, the Minnesota Orchestra has only recently emerged from a 15-month lockout, an event that sent shock waves through the industry and raised anew questions about the health of American orchestras generally.

“Every orchestra’s troubles are unique to their situation. Detroit was the first out of the economic downturn box and perhaps some other ensembles thought they would fare better,” Slatkin wrote. “It is disheartening to see such turmoil in our industry, but it seems like each one is trying to find individual solutions.

“[The DSO has] hit upon some outstanding efforts, notably in community outreach, Internet broadcasting and new fundraising initiatives. It is my sincere hope that Minnesota and all the others become even more connected to their respective homes and place the highest value on the audience that has supported them over the years.”

Community outreach also is an important part of the Florida tour, communications manager Gabrielle Poshadlo said. Small ensembles from the DSO are performing this week at the Children’s Hospital at St. Mary’s Medical Center, the MorseLife senior residences, The Gardens mall, and Hospice of Palm Beach County, she said. 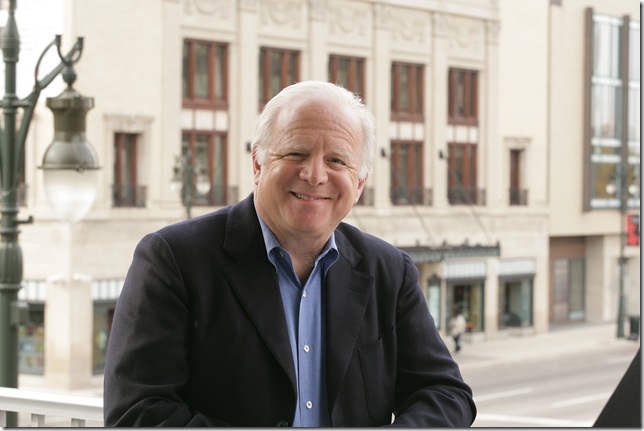 The economic situation in Detroit also had the effect of drawing attention to the city’s cultural institutions, Slatkin wrote.

“In some ways, it has been the cultural landscape that has changed some of the perception of Detroit. Despite the ongoing dispute over the [Detroit Institute of the Arts] art collection, attention has been focused as never before on the city’s assets. Now, when guest artists and friends come to visit, they all want to see what is happening, and it is now easier to show them the positive growth we are experiencing.”

Slatkin is one of the most important American maestros of the last 30 years, having brought the St. Louis Symphony into new prominence under his tenure there, following that up with more than a decade at the National Symphony Orchestra in Washington, D.C. The Los Angeles-born son of two members of the Hollywood String Quartet, Slatkin studied conducting with Walter Susskind at the Aspen Music Festival and at the Juilliard School with Jean Morel.

In addition to his work with the St. Louis and National symphonies, he also has been chief conductor of the BBC Symphony Orchestra in London. He’s been a guest and advisor for the Los Angeles Philharmonic and the Pittsburgh Symphony Orchestra, and is a recipient of the National Medal of Arts.

Slatkin has a vast discography of more than 100 recordings, seven of them Grammy winners. He’s recording all the Rachmaninov concerti with Kern and the Lyon orchestra, and with Detroit, he’s recording the complete symphonies and concerti of Tchaikovsky. Slatkin’s predecessor in Detroit, the great Estonian conductor Neeme Järvi, was notable for his championing of fresh repertoire, something that Slatkin also has made an important part of his work.

“Interestingly, I get very few letters of complaint these days. People seem to trust my instincts when it comes to programming. My tastes tend toward a conservative side of new music, but I certainly enjoy bringing some lesser-known older works to our audiences’ attention,” he wrote. “Overall, people do not seem as frightened about the contemporary scene in music these days. Perhaps that is because more and more composers are following their emotional instincts, not just their intellectual ones.” 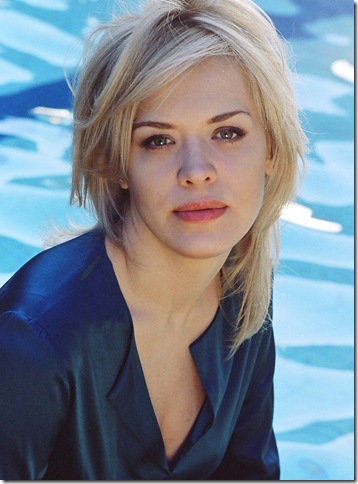 As for the Florida concerts, Slatkin said he’s happy to be working again with Kern, who won the gold medal at the Van Cliburn competition in 2001, and has had a strong international career ever since.

“Olga is an artist I have loved working with ever since our first encounter about nine years ago. Technique to burn, incredible musical instincts and one of the few who actually listen to what the orchestra is doing,” he wrote. “She is also a lot of fun at dinner parties.”

The Rachmaninov and Prokofiev works are both in one movement, formally, but Slatkin doesn’t think about them that way.

“Each one has well-defined sections that then proceed to connect with material heard earlier,” he wrote. “The Rachmaninov makes my list of top 10 pieces. It is perfection in composition personified. There is not a misplaced note in the entire piece.

“The Prokofiev is really about the pianist. Although the orchestra part is interesting, all eyes and ears are on the keyboard,” Slatkin wrote.

Tonight’s performance at the Kravis will open with the Spirituals of the American composer Morton Gould, a relative rarity from a composer who was once much better-known.

“Morton would have been 100 this year and so I wanted to celebrate the man and his music. ‘Spirituals’ does not use pre-existing material but conveys the spirit of that musical form,” Slatkin wrote. “I love this piece and always have. Gould is, sadly, one of the forgotten greats of our country and some enterprising conductor would do well to look into more of his music.”

Aaron Copland’s Three Latin-American Sketches, which is scheduled for Wednesday afternoon, also doesn’t get many outings, though its composer is quite familiar.

“This is a true rarity, almost never performed by orchestras. It was written late in Copland’s life but utilizes material he had composed earlier,” he wrote. Premiered in 1965, it is scored for strings, “just a few winds,” piano and percussion, and might remind some concertgoers of Malambo, a barn-burner by the Argentine composer Alberto Ginastera, he wrote.

“It is a delightful surprise to seasoned concertgoers and makes a nice change from a Berlioz overture to open a program,” Slatkin wrote.

In 2011, Slatkin launched Live From Orchestra Hall, a webcast series that he says has helped the DSO reach many new people.

“Certainly for the DSO, the Internet has been incredible. We are reaching audiences around the world, sometimes up to 30,000 per broadcast,” He wrote. “There is no question that the orchestras that figure out how best to use the technology will be the ones with the brightest futures.”

But this week, he’ll be concentrating on showing Floridians what the DSO is all about.

“Audiences will learn that we are in great shape. There were many who wrote us off as dead during the strike, and presumed that we would never regain our skills. They were wrong,” he wrote. “We are stronger than ever with seasoned veterans as well as some sparkling new talent. All of us are eager to show Floridians who we are and what we have accomplished.”

The Detroit Symphony Orchestra, with guest artist Olga Kern, performs tonight at 8 p.m. and at 2 p.m. Wednesday at the Kravis Center, and at 8 p.m. Friday in the Knight Concert Hall at the Adrienne Arsht Center in Miami. For the Kravis, call 561-832-7469, or visit www.kravis.org; for the Arsht, call 305-949-6722 or visit www.arshtcenter.org.

Film: Just in time with the opening of movie theaters in Palm Beach County comes the season’s most … END_OF_DOCUMENT_TOKEN_TO_BE_REPLACED

Music: The very last concert Franz Joseph Haydn attended in his life was in March 1808, about a year … END_OF_DOCUMENT_TOKEN_TO_BE_REPLACED