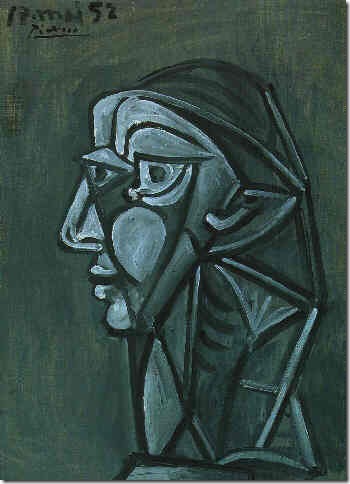 Each of the women portrayed by Pablo Picasso in six distinctive works currently on display would like to say she was the love — or lust — of his life. No one knows for sure, but at least now we can do what the artist never could: have them all in the same room.

There has been no hair-pulling and no eye-gouging since the exhibition, housed in the Norton Museum of Art, opened in November. And nothing of the sort is expected to happen from now until it ends Feb. 15.

Having met Paris a second time, a 22-year-old Picasso could not resist falling for the same subject matter that seduced artists before him, and so he painted Parisian bohemian cafés and nightlife. At the Café is the oldest piece on display and clearly speaks the language of Edgar Degas and Henri de Toulouse-Lautrec. It portrays three bored women grouped around a bistro table. One of them occupies herself with petting a wandering dog.

Looking at this bright pastel piece one would never guess it was made the same year as his melancholy Seated Harlequin and Absinthe Drinker (not in the show). Unlike these two works, At the Café hardly reflects the drama and depression that became known as Picasso’s Blue Period. But if one looks closely at the woman sitting on the right, one can detect glimpses of that sense of resignation and the gestures and slouching postures that would come later. 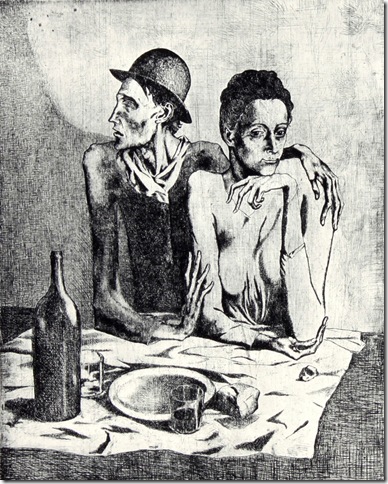 Next to the other visually complicated women, the etching titled The Frugal Repast (1904) seems out of place and too straightforward. The fragility of the bony, elongated figures lends the work a serious tone and gives the colorful-Picasso fan something less cheerful. It is a picture of hopelessness depicting a thin, blind man and his woman with nothing left to eat. But where is the woman/muse here? There are no curves. No eroticism. No exaggerated features. In fact, the features are disappearing through starvation. This is one of the artist’s better known prints and is part of the Saltimbanques Suite series. And, no surprise here, it was produced during his Blue Period.

The star of the exhibition is no doubt the colorful Woman with Wrist Watch from 1932. At the time, Picasso was having an affair with a blonde young girl by the name of Marie-Thérèse Walter. She appears in many of his sensual paintings as well as in Guernica and is said to have fed the artist with the needed inspiration to redirect his artistic career. This is the way Picasso saw his lover and it is a style we recognize instantly: big-nosed, full-bodied women and large colorful panels instead of the small cubes and straight lines of Cubism. The cubist Picasso always has been hard to distinguish from Georges Braque, but with Woman with Wrist Watch there is no mistake.

After they split, Walter never married. She hung herself a few years after the artist died. The painting depicts a much happier time and draws attention away from perhaps-more- deserving pieces that cannot compete with its sumptuous subject. 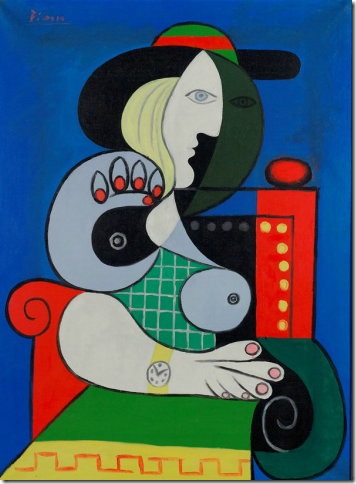 One of them is Head of a Woman, which the museum featured last August in its Masterpiece of the Month series. The muse this time is Françoise Gilot, the mother of Picasso’s children (Claude and Paloma) and his companion for 10 years. This is the second in a series of six Gilot portraits he painted in May 1952. It is very minimal in terms of color.

Cubism’s flatness and duplicity can be better appreciated through the two faces simultaneously shown on Bust of a Faun. They emerge with different angles. The right side is depicted head on while the left side is seen in profile. The two faces clash resulting in one primitive, mask-like face. The south of France in 1946 saw Picasso’s revival of mythological subjects. Faun is from that same year and was meant to celebrate the roots of Mediterranean culture.

Consisting of just one gallery room, Picasso’s Muses can easily be tackled in less than an hour.

If you go, while you enjoy the skill of this Spanish modern master, rejoice in the fact that his women continue getting the type of undivided attention they craved and, perhaps never really got from the artist himself.

Film: Just in time with the opening of movie theaters in Palm Beach County comes the season’s most … END_OF_DOCUMENT_TOKEN_TO_BE_REPLACED

Music: The very last concert Franz Joseph Haydn attended in his life was in March 1808, about a year … END_OF_DOCUMENT_TOKEN_TO_BE_REPLACED