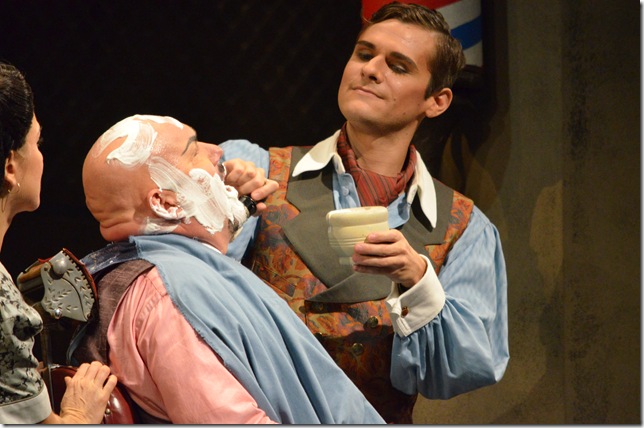 Since 1990, Florida Grand Opera has revived Gioachino Rossini’s The Barber of Seville about every five years, and for this 75th anniversary season, the company has brought the opera back again on the eve of the work’s bicentenary.

This most popular of Rossini’s operas (to the unfortunate general neglect of his more important dramatic operas, such as Otello) remains a marvelous expression of wit in music, brilliant and bubbly, full of lovely, catchy tunes, vocal display and exciting ensembles. After its disastrous opening night in Rome in 1816, the opera won the next night’s audience over and has been highly popular ever since; it also “marked the turning point of the conversion of many people to Rossini’s operatic style,” as Stendhal noted in a somewhat grouchy take on the opera in his Vie de Rossini of 1824.

Its madcap libretto and fast-moving music have led many an opera company to mount Barbers in as wildly comic a fashion as possible, in the apparent belief that the artificiality of the recitatives and the plot’s distant social norms make it too hard for audiences to sit through. But that tends to destroy the opera rather than save it, and why I approach new presentations of The Barber with some unease.

Which is why it is a pleasure to report that FGO’s current Barber, in a smart rethinking by Canadian director Dennis Garnhum, is a sheer delight, thoroughly engaging and excellently sung, with a setting that allows the comedy to develop naturally and believably. Garnhum, aided by an ingenious and inspired set by Canadian designer Allan Stichbury (this production originated at Vancouver Opera), has moved the opera to the Estudio Bartolo movie studio in the Seville of 1940, where a popular ingénue named Rosina is the proverbial bird in a gilded cage to studio owner Dr. Bartolo. Figaro is a barber brought in on a daily contract to cut hair for the many extras who are constantly coming in and going out, dressed in various costumes for the movies being shot offstage — a wonderful idea that lets the chorus roll in and out absolutely without artificiality, unlike traditional stagings. 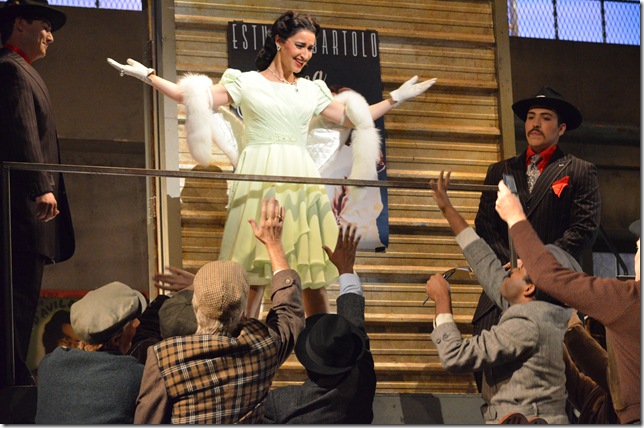 The second cast, which debuted Sunday at the Ziff Ballet Opera House in Miami, featured Hilary Ginther as Rosina, Brian James Myer as Figaro, Javier Abreu as Almaviva and Kevin Glavin as Bartolo. Abreu, last seen in FGO’s 2006 production of Mozart’s Abduction from the Seraglio, was a last-minute fill-in for an ailing Andrew Owens, while Glavin, who sang this role in the 2001 and 2006 FGO productions of Barber, recently broke his right foot and performed from a wheelchair and using a cane, which also seemed like a creative directorial idea rather than a necessity, so ably did it fit in with the action and add to Bartolo’s general ineptitude as a believable lover.

Ginther, a Virginian who like Myer is a member of FGO’s Young Artist Program, was a fine Rosina, a good actress with a strong, agile voice that has true mezzo coloring. She has an easy top with plenty of power, and while the very bottom of her range is rather soft, her display singing was mellifluous and expert. She sang all those elaborate roulades in “Una voce poco fa” and especially “Contro un cor” with admirable smoothness and warmth, which fit better with the way she played the character than a purely virtuosic approach would have; in other words, she came across like a real person rather than an ornament. This is a good role for her, and she should be able to repeat it with much success. 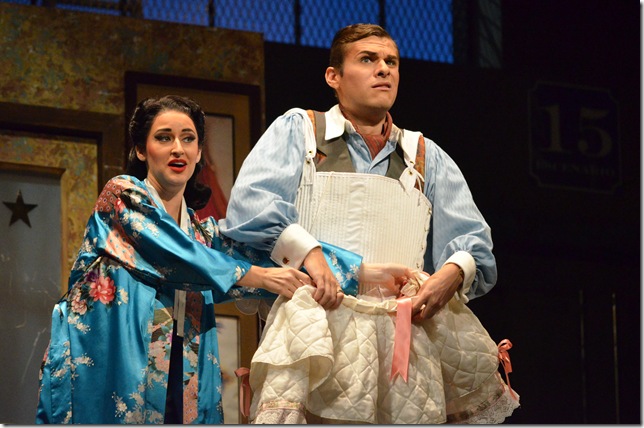 The same goes for Myer, a Nevadan with a master’s from the Cleveland Institute of Music. An excellent Figaro, he has a young, clarion voice that carried beautifully, and in his “Largo al factotum” he did just enough of the repeat Figaro calls to make it funny and not over the top. He, too, is a very good comic actor, and his stage business was in the semi-slapstick tradition, which had the large house Sunday afternoon fully on his side.

But one thing he was not was the only center of attention, and this, too, was the work of the staging. A movie studio putting out films is a hive of activity, and with all that bustle to look at on stage amid Stichbury’s detailed set, there was no need for the production to rely on Figaro to bring everything back to life. 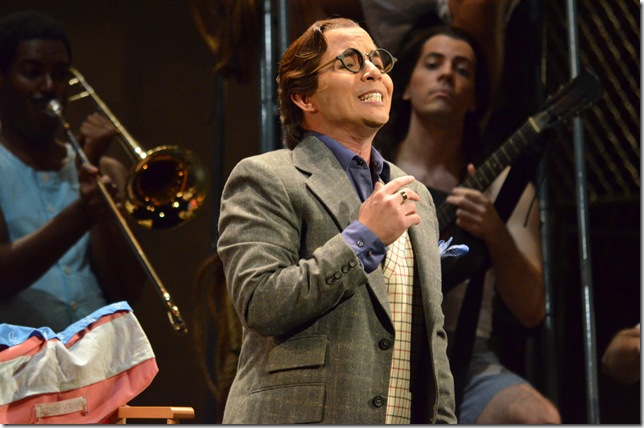 Abreu, a Puerto Rican tenor, was a delightful Almaviva, with a very Italianate sound that had muscle in the center of his register and a very attractive head voice. He is a slight, shortish man, which made him ideal physically as a partner for Ginther, and they looked persuasive as a couple. His voice was especially lovely in the “Se il mio nome” serenade to Rosina, one of the prettiest parts of the score; the sheer flexibility of his voice makes him well-suited for Rossini in general, and that FGO was able to land him at the last minute for this was a real stroke of good fortune.

Glavin, a veteran bass who first appeared with this company in Donizetti’s L’Elisir d’Amore in 1998, was a splendid Bartolo, with a big, booming voice and an interpretation that let Bartolo be an intelligent person, if none too wise in matters of the heart. In this production, he is not an easily duped buffoon, but someone who’s besotted with a lovely young woman, and who is thrown off his game thereby. Glavin sang winningly, and he moved around on his cane and in his wheelchair with great agility, which could not have been too easy.

Alex Soare, as Don Basilio, here reconceived as a photographer as well as a music master, demonstrated a rich, elegant bass-baritone, while Eliza Bonet, as Berta, sang her one aria with crispness and dispatch. Her mezzo has a distinctive tonal accent that sounds well-suited for comic roles. Nicholas Ward’s Fiorello, Edgar Miguel Abreu’s Ambrogio, and Zachary Elmassian’s police officer were all ably sung; Elmassian’s bass-baritone was notably strong. 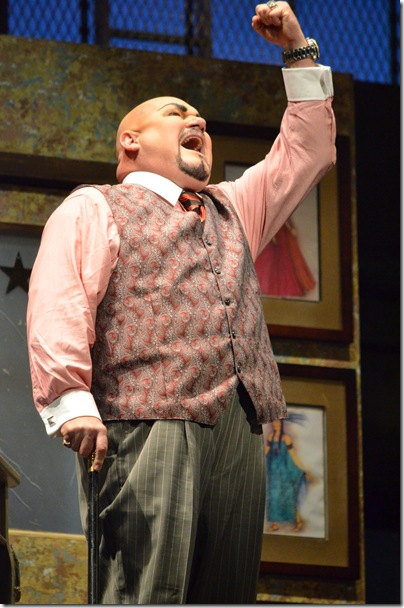 The men of the chorus sang nicely, and had a lot to do in this production, which again made things easier for everyone all around. Even when they weren’t singing, they were milling about picking up their checks for a day’s work or taking part to very funny effect in the scene where Figaro is giving Bartolo a shave.

FGO’s principal conductor, Ramón Tebar, brought his usual immense energy to his duties in the pit, and also his usual tempo waywardness. Several of the rapidly sung finales were too fast for clarity, and the Act I “Fredda immobile,” in which the principal singers were singled out under spotlights, was far too slow, and robbed the ending of the act of its joyful forward motion. Aside from the couple times when it was playing at cross-purposes with the singers, the orchestra sounded good, with a light touch that kept them in a supporting role. 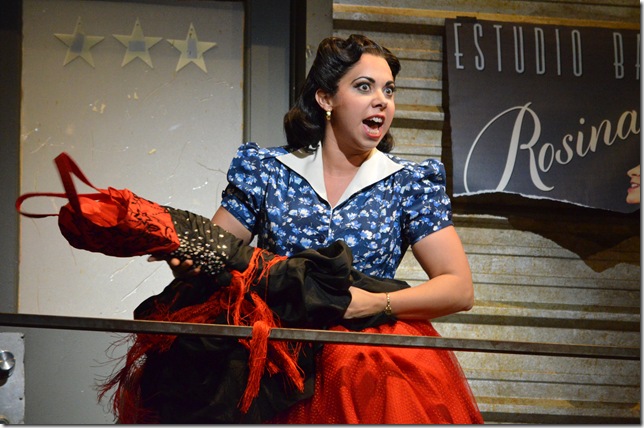 I have seen many productions of The Barber of Seville, most of them set more or less in the late 18th century. But I think I’ll remember this one more than most of the others, not just for its successful resetting but the overall ability of its cast. Indeed, the excellence of the secondary cast says very good things about the company’s Young Artist program, and if you’ve never seen this opera before or have resisted a return visit, this may be the production you want to see.

The Barber of Seville is performed tonight, Nov. 20 and 21 at the Ziff Ballet Opera House, and on Dec. 3 and 5 at the Broward Center for the Performing Arts in Fort Lauderdale. The secondary cast (except for Glavin on Dec. 5) can be seen again Nov. 20, Dec. 3 and Dec. 5; the primary cast, which features Megan Marino as Rosina, David Pershall as Figaro and Kevin Short as Bartolo, takes the stage tonight and Nov. 21. For more information, call 800-741-1010 or visit www.fgo.org.

Film: Playwright August Wilson began his chronicle of the African-American experience throughout the … END_OF_DOCUMENT_TOKEN_TO_BE_REPLACED

Film: Just in time with the opening of movie theaters in Palm Beach County comes the season’s most … END_OF_DOCUMENT_TOKEN_TO_BE_REPLACED

Music: The very last concert Franz Joseph Haydn attended in his life was in March 1808, about a year … END_OF_DOCUMENT_TOKEN_TO_BE_REPLACED