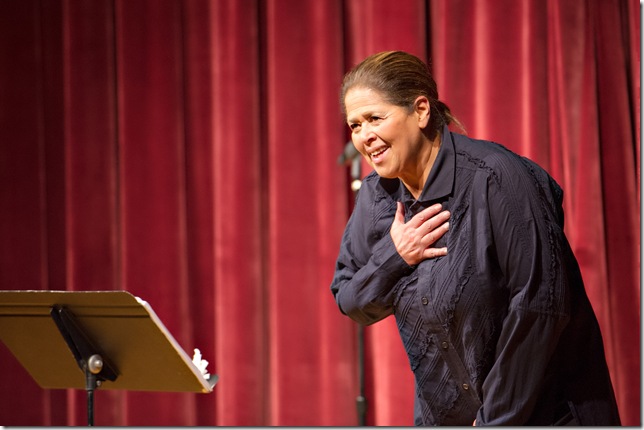 When actor Anna Deavere Smith is in character, she can actually be many different characters. She brought some of her best stage personages to a performance at the Cultural Arts Center in Boca Raton on Tuesday night as part of the Festival of the Arts Boca lecture and theater series.

A playwright, professor and known face on the movie and TV screen, Smith employs a unique brand of impressionism to bring issues of social and community interest to public notice by using the words, inflections and even facial expressions of people she is quoting.

In fact, she does more than quote. She takes the verbatim transcripts of people she interviews about specific topics and delivers them with the vocal style, gestures and tone of that person. It’s not intended to mock, but, rather, to elaborate, inform, entertain and ultimately touch the listener.

At Tuesday’s performance, she verbally touched many in the near-capacity audience with such soulful, tender and elucidating words that the audience remained hushed throughout. Anticipating possible cryers, the stage crew placed two boxes of Kleenex on the sparse table next to the music stand where she kept her script. Smith used several tissues during the show, but not for tears. “My nose runs when I appear in front of fancy people,” she quipped.

The audience obviously fancied her, too, and paid back her hour on the stage with a rousing standing ovation.

Best known for creating one-woman, multi-character plays about American social issues, Smith brought forward her bevy of characterizations to discuss the topic, “Reclaiming Grace in the Face of Adversity.” She said she received a number of different answers when she asked for comments about grace from a Muslim imam, a rabbi and a Buddhist monk.

She based much of her talk on the song, Amazing Grace, which tells the true story of a rich and hardened slave trader, John Newton, who gave it up and became a religious evangelist when he nearly lost his life on a ship rocked by a violent storm.

She soon channeled the late Rev. Peter P. Gomes of Harvard University, picking up on his rambling speaking style, which was often filled with unplanned comic lines and a striking inability to reach a conclusion.

“I am not filled with grace, I only have hints,” she said in Gomes’ dialect, kind of a Bill Buckley drawl, but spoken more quickly. The minister, through Smith, told how Amazing Grace had replaced Rock of Ages among popular church tunes because “it’s the only religious song everyone knows.”

She also looked at grace from the viewpoint of ungracious moments, as told by a woman she interviewed in a hospital in New Haven, Conn. The passages are from Smith’s most recent play, Let Me Down Easy, which examines health care and the resilience and vulnerability of the human body.

The queried woman was shocked at being told she had “veeery, veeery (Smith stretched the syllables) bad kidneys” and would have to go on dialysis. The woman said she would refuse, because her daughter had died while receiving the kidney treatment. 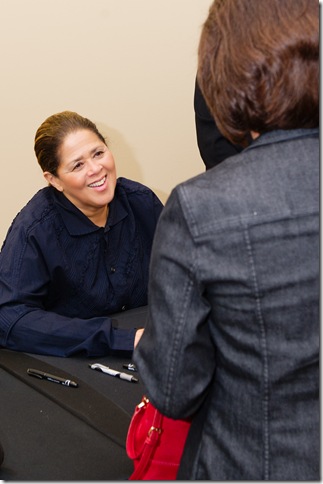 Smith also brought to the stage her Aunt Lorraine, “who never went anywhere without a Kleenex.” The theater artist used a gentle, soft, Southern dialect to portray the kind-hearted lady who, when confronted by her young ones coming in from the cold without gloves, would thrust their chilly hands under her arms. “I wish I could put my hands under her arms right now,” said Smith, wistfully.

Rounding out the show were impressions of a couple of well-known folks, the late Texas Gov. Ann Richards and U.S. Rep. John Lewis, a Georgia congressman. Smith used up-tempo, clipped-off verbiage to copy the governor, who was about to undergo treatment for esophageal cancer. She displayed grace under fire during her treatment.

To recall Lewis’s words, Smith deferred to a tougher, Southern drawl, with exaggerated lip movements. Her tone trailed off to a humble, just-above-a-whisper pattern when the political giant was confronted by one of the police officers who apologized for beating him as he walked in a civil rights march with ministers Ralph Abernathy and Dr. Martin Luther King 50-plus years ago. The men hugged, and, to this day, call each other, “Brother.”

Recipient of many awards, Smith’s play, Fires in the Mirror, about the 1991 Crown Heights riot, a runner-up for the Pulitzer Prize, took home Obie and Drama Desk awards. Twilight: Los Angeles 1992 won Drama Desk and Obie awards and received two Tony Award nominations. She has appeared on TV in Nurse Jackie, The West Wing and All My Children.

Film: Playwright August Wilson began his chronicle of the African-American experience throughout the … END_OF_DOCUMENT_TOKEN_TO_BE_REPLACED

Film: Just in time with the opening of movie theaters in Palm Beach County comes the season’s most … END_OF_DOCUMENT_TOKEN_TO_BE_REPLACED

Music: The very last concert Franz Joseph Haydn attended in his life was in March 1808, about a year … END_OF_DOCUMENT_TOKEN_TO_BE_REPLACED