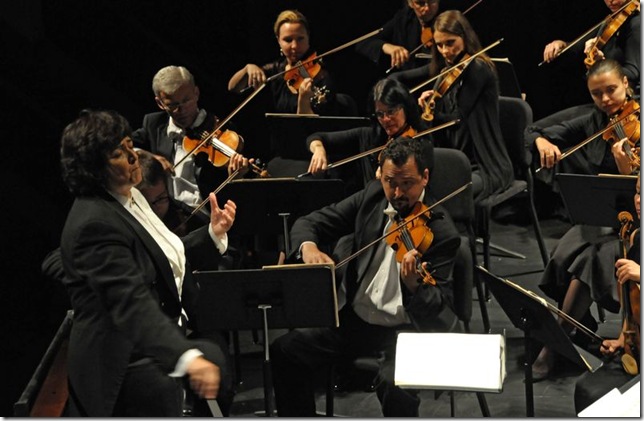 Sunday afternoon, the South Florida Symphony stopped by the Carole and Barry Kaye Auditorium at Florida Atlantic University in Boca Raton to play a pair of symphonies by Mozart and Beethoven. This performance was third in their January tour, beginning in Key West, and ending with their debut at the Adrienne Arsht Center in Miami.

The first half of the concert featured Wolfgang Amadeus Mozart’s Symphony No. 36 (in C, K. 425) known as the Linz Symphony, Linz, Austria, being the location of the work’s composition and premiere just a few days later. While not as well-known as some of the other Mozart symphonies, such as the G minor symphonies (nos. 25 and 40), Paris (no. 31), or his final symphony, Jupiter (no. 41), this work has many of the same characteristics, and requires much of the same lightness and playfulness as the others often do.

Although this was a lovely reading of the Mozart, it did not seem as if conductor Sebrina María Alfonso was getting the desired energy from the ensemble that she wanted. The precise playing needed to channel that energy was not quite there in the first movement, with the violins not always being in agreement on intonation or some of the faster rhythms. There was a sense of flight that was missing from the other movements as well, as though the sound was just a little too weighed down.

The second half welcomed the Master Chorale of South Florida, as well as a quartet of solo voices, joining the orchestra in a performance of Ludwig van Beethoven’s monumental Symphony No. 9 (in D minor, Op. 125), the Choral Symphony. This work is a world unto itself, and, at more than an hour in length, is the cornerstone of any concert in which it is included.

Like the Mozart, there seemed to be an energy lacking through much of this piece. The larger moments never hit their heights, as much of the sound ended up in the ceiling, but some of the subtler ones played well. This is important, as Beethoven early on, especially in the second movement, plants the seeds for his famous “Ode to Joy” melody that will be revealed in the finale. These seeds are often located, not in the primary melody of the moment, but in the countermelodies underneath. Alfonso’s treatment of these lines shed a light on musical hints at various points, whether it was in the horns, bassoons, or a particularly beautiful phrase in the cellos.

The more violent sections, of which there are many in the first two movements, never quite had the sharp edge needed, despite an extra push from timpanist Brad Watson.

The highlight of the symphony and the entire concert was the final movement, which includes a chorus, and solo soprano, mezzo-soprano, tenor, and bass-baritone singers. In addition, the orchestra expands a bit with a few extra percussionists, a piccolo, a contrabassoon, and some trombones, all of which sat out the earlier movements.

Soprano Eileen Stempel, mezzo-soprano Janna Baty, tenor Ray Bauwens, and bass baritone Neil Nelson piloted the orchestra in the vocal solos. In what seemed to be the fault of the hall, the quartet never blended convincingly, but sparkled in their solos.

Without question, the Master Chorale of South Florida was the strongest element of the performance. Their sound was clear, strong, and joyful in all of the right moments. They provided that last bit of energy that was missing earlier in the concert.

Film: Playwright August Wilson began his chronicle of the African-American experience throughout the … END_OF_DOCUMENT_TOKEN_TO_BE_REPLACED

Film: Just in time with the opening of movie theaters in Palm Beach County comes the season’s most … END_OF_DOCUMENT_TOKEN_TO_BE_REPLACED

Music: The very last concert Franz Joseph Haydn attended in his life was in March 1808, about a year … END_OF_DOCUMENT_TOKEN_TO_BE_REPLACED