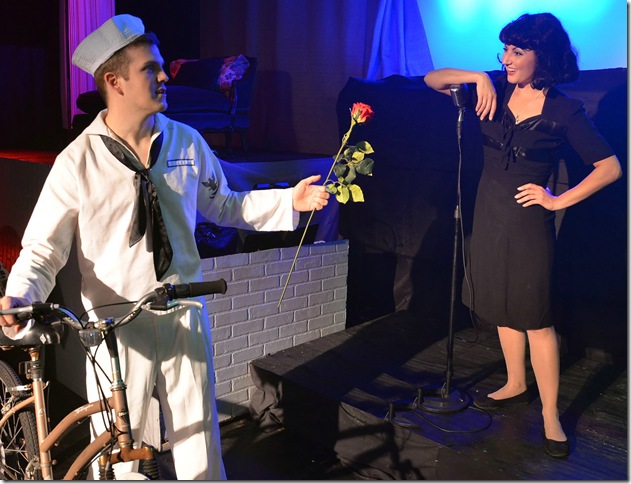 By all accounts, the personal life of famed French chanteuse Edith Piaf was pretty sad. So, it’s not unexpected that a biographical play about the “little sparrow” with the powerful voice that emanated from a 4-foot-8 frame would also be filled with moments of sorrow.

They moderated that risk by tapping an established New York musical actress and cabaret singer, Victoria Lauzun, to play the lead role. They also assembled a cast of local singer/actors who’ve performed at many well-known venues.

Still, the show that mixes intensity with some of Piaf’s pained songs, suffers a shaky Act I, though Act II is steadier and easier to follow. The sound system at Delray Square is unforgiving to the actors and audience, and its constant electrical hum during Act I messes with the acoustics.

Lauzun’s feigned French accent is also distracting. She can beautifully interpret the French song lyrics in Piaf’s tunes, so the dialect isn’t even necessary.

Playwright Gems has also omitted chunks of explanatory material, forcing the audience to assume a lot. The playwright crafts Piaf as a bed-hopper with the morality of a rutting bunny. She offers little that’s good about the torch singer who became the national diva of France in World War II and, at one time, was the highest-paid singer in the world. 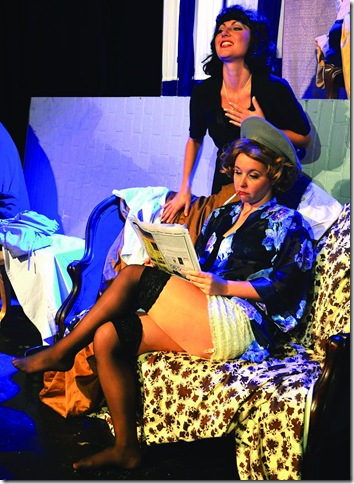 Perhaps Act II is more tolerable because the chaos has ended and the data gaps have diminished. Piaf is an established star, but she is beginning to decline. She loses the love of her life, a famed boxer named Marcel Cerdan (Richard Anthony Forbes), in a plane crash. Actually, the crash is another piece that Gems leaves out. We only see Piaf crying in agony when told that something has apparently happened to him.

Thankfully, Piaf overcomes author miscues to earn kudos on several levels. The set, designed and built by the aforementioned Forbes and Joseph Long, is the essential imagining of squalid streets endured by Edith when she was abandoned by her mother and ended up being raised by her grandmother, a brothel operator.

In truth, and in the play, Edith learned the tricks of the trade — pun intended — as well as a vocabulary overrun with F-words. She plays potty mouth until the day she dies, and, legend has it, even employed an expletive in the last sentence she spoke on her deathbed.

There are tender moments in Piaf, and, of course, songs that made the singer a star of the torch song circuit, despite a life cut short by liver cancer at age 47. An early exchange between Piaf and club owner Louis Leplee (Waldman) is particularly touching as he tries to give her the stage name, “La Môme Piaf” (“the little sparrow”) which she continually rejects.

One bit of comic relief comes from Jacob Grant, who shows up as Angelo, an Italian cowboy auditioning for Piaf. He tries to sing “Deep in the Heart of Texas,” but sounds more like one of Andy Kaufman’s characters. He tries again with “O Sole Mio” and sounds more like Pavarotti. 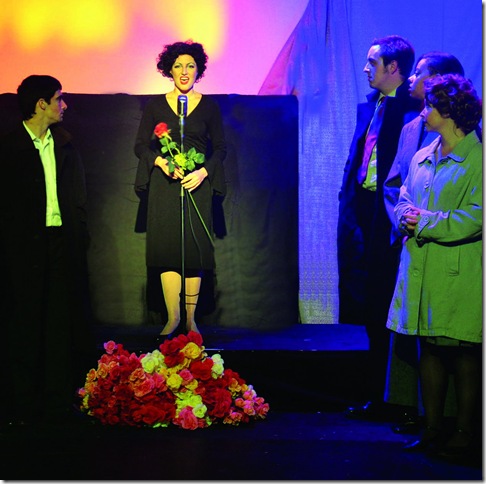 Among other cast members is Victoria Anderson, who gives sparkle and glitz to her role as singer Josephine Baker. Courtney Poston is excellent as Toine, Piaf’s constant companion and friend. Their sometimes tender, sometimes raucous encounters are uplifting.

As Piaf, Lauzun offers a genuine interpretation, particularly her signature song, “La Vie en Rose,” (Piaf wrote the lyrics) sung with the same stunning tremors as the original. Another Piaf standard, “Non, Je Ne Regrette Rien,” (“I Regret Nothing”) stands out. Lauzun also performs a haunting version of “If You Go Away.”

The ensemble joins in wonderful harmony to pay tribute to Piaf with the song, “Les Feuilles Mortes.” Throughout, Lauzun sings solo, except for a duet with Jacko (Scott Gunner), sharing a lovely tune that translates to “What Good Is Love?”

Some of the accompaniment for the songs in this production is recorded. But the excellent piano playing is unmistakably that of Phil Hinton, a master of the 88s and Delray Square’s musical director.

Music: The very last concert Franz Joseph Haydn attended in his life was in March 1808, about a year … END_OF_DOCUMENT_TOKEN_TO_BE_REPLACED

Film: Major League Baseball culminates each season with the World Series, but to find the true … END_OF_DOCUMENT_TOKEN_TO_BE_REPLACED