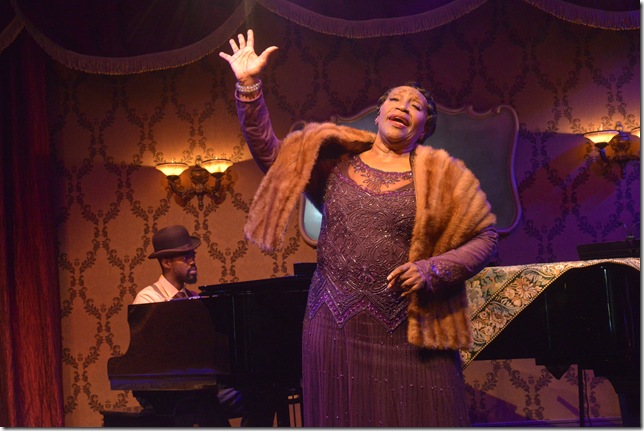 For the third show of his first season at the helm of The Theatre at Arts Garage, Keith Garsson has selected a bioplay-cum-concert featuring the song stylings of Bessie Smith, the Depression-era performer considered to be the “Empress of the Blues.”

Featuring over a dozen musical numbers delivered with commanding power and attitude by West Palm Beach’s own Avery Sommers, The Devil’s Music: The Life & Blues of Bessie Smith is a fitting complement to the Delray Beach venue’s jazz and pop programming.

Broadway veteran Sommers comes on strong as Smith, seething with anger from the moment she steps onstage. It is the show’s conceit that she has just been refused front-door entry to the Memphis club where she was booked to perform. So she storms over to the private after-hours establishment, a so-called buffet flat, recreated with tawdry period detail by Bombshell Productions. Backed by an accomplished four-piece combo, Sommers belts out a string of songs of heartache, bitterness and unrequited love.

Between the numbers, she fills us in on Smith’s considerable struggles, but the script by Angelo Parra is a dramatically inert recitation of facts. We hear about her career ups and downs, the husbands who attracted and betrayed her, the racial barriers she had to overcome and several premonitions of her imminent death — represented by a hokey green lighting effect.

The reason to make a beeline for The Arts Garage this month is to hear Sommers’ stunning renditions of such numbers as “Downhearted Blues,” “Nobody Knows You When You’re Down and Out” “ ’T’aint Nobody’s Business if I Do” and “St. Louis Blues,” the last being Smith’s breakout hit, which sold 780,000 copies.

Otherwise, the evening falls into most of the theatrical traps of one-person shows, even though The Devil’s Music does allow some give and take between Sommers and her musical director Elijah Taj Gee, who assumes the role of Pickle, Smith’s confidant, protector and accompanist.

If the show sounds familiar, that could be because the late, lamented Florida Stage presented it in Manalapan back in 2001, featuring Miche Braden, the performer who also contributed the original musical arrangements. At the Arts Garage, however, director Genie Croft has been given considerable latitude to reshape the show around Sommers, including the addition of a forecful, slow-paced, nearly unaccompanied “Amazing Grace,” one of the evening’s highlights.

The Devil’s Music does fill us in on Smith’s life over the course of its 85 intermissionless minutes, but everything you need to know about her comes through in the brassy, bawdy belting performance by Sommers.

Film: Just in time with the opening of movie theaters in Palm Beach County comes the season’s most … END_OF_DOCUMENT_TOKEN_TO_BE_REPLACED

Music: The very last concert Franz Joseph Haydn attended in his life was in March 1808, about a year … END_OF_DOCUMENT_TOKEN_TO_BE_REPLACED