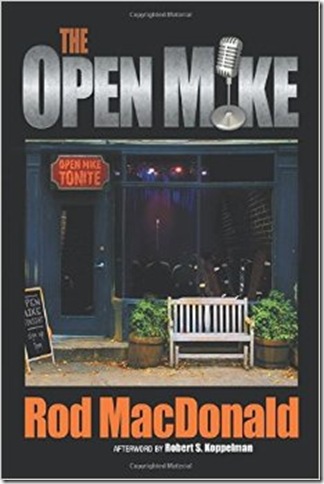 Delray Beach-based author Rod MacDonald’s primary audience for his debut novel, The Open Mike, is likely to include many of the folks who have followed his primary career as a singer/songwriter.

Considering that he got his musical start singing and playing guitar in Greenwich Village in the 1970s, where the book’s lead character (the similarly-named Reo MacGregor) does the exact same thing, much of the intrigue hinges on how much of this tale is actually autobiographical.

All of which means the afterword, in which Broward College senior professor of English Robert Koppelman describes the differences between MacDonald and MacGregor, might have made an even better foreword. Koppelman explains that MacDonald wrote much of the book’s first of two sections, the opening, 50-page “The Book of Reo,” as a series of short stories while living and performing in Greenwich Village in the early 1980s.

Originally titled “The Book of Rico,” the section was retitled with the less Spanish-sounding name Reo. MacDonald, who’s of Scottish descent, then chose MacGregor because it was the surname of Rob Roy, the Scottish folk hero of the early 18th century who was immortalized in Sir Walter Scott’s 1817 novel Rob Roy (and by Liam Neeson’s portrayal in director Michael Caton-Jones’ 1995 film of the same name).

Still, the credo of “write about what you know” appears to apply to much of The Open Mike. The 10 short stories-turned-chapters of the opening section are a series of failed gigs, friends, and romantic relationships for Reo. The Greenwich Village location is implied throughout more than directly referred to, and the successes and failures come across as a thinly veiled peek into MacDonald’s introduction to the scene during the 1970s.

(Full disclosure: Rod MacDonald and I have been bandmates in Big Brass Bed for more than 10 years. But we debate, and often disagree, on topics such as song tempos, the validity of hit singles, and beyond.)

Reo’s mindset is a peek into the world of most singer/songwriters, Big Apple or otherwise: frustration at the lack of jobs, pay and respect; a driving single-mindedness to play one’s own compositions rather than “sell out” by playing current hits by others. But to the Greenwich Village novice, the opening section can lack symmetry, which may explain why MacDonald and Koppelman didn’t include a foreword that could’ve been construed as foreshadowing. 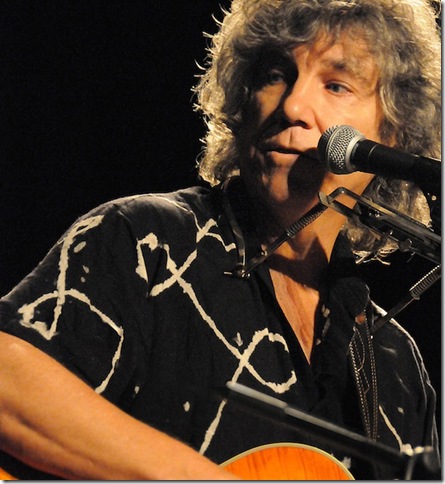 By the more cohesive 220-page, 38-chapter second section that bears the book’s title, the veil appears to be removed for anyone familiar with MacDonald’s history. The reader finds out that, like MacDonald, Reo is from Connecticut; has an older and influential sister, graduated from Columbia Law School but chose to become a singer/songwriter rather than taking the Bar exam, and worked in journalism (MacDonald was once a correspondent for Newsweek; Reo worked for the fictitious Newstand).

The second half of The Open Mike’s closing title portion, starting with chapter 20 (titled “See You Around”), improves its focus. With perhaps too many chapters tied up in Reo’s relatively anonymous sexual conquests, it reintroduces the reader to a flawed female character named Castillo from the beginning of the book (chapter 3, “Reo Learns the Kama Sutra,” in which she tells him, “Please don’t fall for me”).

The author craftily implies Castillo’s imbalance, and primary relationship with another man, more through her actions than words. It’s eventually revealed that she, too, is a singer-songwriter and tortured artist (like most characters in The Open Mike), and the fact that her other lover is never officially revealed actually makes things more dramatic. MacDonald also introduces some Greenwich Village celebrities of the era with fictitious names. His friend, the late singer/songwriter Dave Van Ronk, is obviously the colorful Duke La Mont introduced in the book’s latter title section.

MacDonald colorfully writes that La Mont is, “renowned for singing in a powerful, tender moan, more compelling in that gruff voice than a sweet singer could ever approach. It was, Reo, imagined, like painting with a different substance, oil instead of water, charcoal over pencil; and it came with this wonderful, funny litany of wisdom.”

Coming along in the wake of the Coen Brothers’ Greenwich Village-based 2013 film Inside Llewyn Davis — itself based partly on the posthumous 2005 memoir The Mayor of MacDougal Street by Van Ronk — should help garner The Open Mike interest and sales. MacDonald’s alliterative writing style shines through enough in the book to cover up most of its disjointed undercurrent, and makes for an intriguing read.

It may not prove the visual equal of his first album, the 1983 gem No Commercial Traffic, but the book’s final third especially ties up some loose ends, makes Reo a more mature and sympathetic character, and results in a solid first literary effort.

Film: Playwright August Wilson began his chronicle of the African-American experience throughout the … END_OF_DOCUMENT_TOKEN_TO_BE_REPLACED

Film: Just in time with the opening of movie theaters in Palm Beach County comes the season’s most … END_OF_DOCUMENT_TOKEN_TO_BE_REPLACED

Music: The very last concert Franz Joseph Haydn attended in his life was in March 1808, about a year … END_OF_DOCUMENT_TOKEN_TO_BE_REPLACED