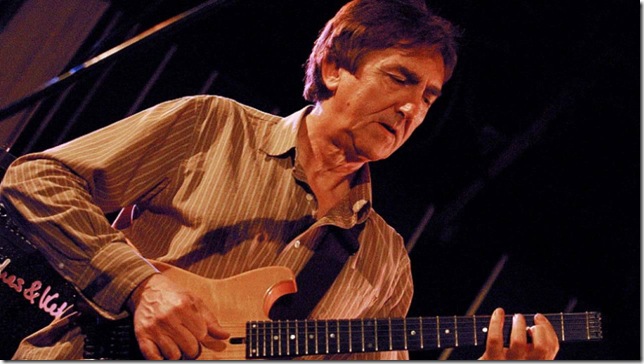 No one inside the black box theater at the Mizner Park Cultural Arts Center in Boca Raton — not the overflow crowd of 300 or the reason they were there, the three instrumentalists led by veteran British jazz/fusion guitar great Allan Holdsworth — could’ve possibly been fully prepared for what they’d experience Saturday.

Considering the reputation and incendiary talents of the 69-year-old Holdsworth, 63-year-old American bassist Jimmy Haslip and 57-year-old Australian drummer Virgil Donati, one could be forgiven for expecting a positive once-in-a-lifetime experience. In many ways, most having little to do with the band itself, this proved quite the opposite.

Call it a train wreck, one complicated by the fact that the show’s shortcomings were also streaming live (plus available for purchase online for a week afterward). Yet in the end, at least it proved to be one that was ultimately easier to clear than perhaps expected.

After an introduction by Jazziz magazine publisher Michael Fagien, the trio strode onstage 20 minutes late and launched into “Fred,” a molten piece that Holdsworth had recorded for the 1975 album Believe It by the New Tony Williams Lifetime (and again on Holdsworth’s 2010 live salute to the since-deceased drummer, Blues for Tony).

But something was amiss. The trio’s sound was alternately muffled and muted, and all three musicians suffered from the imbalance. Donati’s drums were the most audible, although some of his microphones were hotter than others; Haslip’s bass was too prominent, and Holdsworth’s left-hand legato soloing intricacies — a catalyst in his rise to prominence — were buried.

Thus, the obviously distracted guitarist’s inimitable spark-to-simmer-to-boil middle solo never materialized as he fiddled with his settings and effects, clearly never satisfied. After the opening song, he stepped up to the microphone and, despite the presence of the Web camera, angrily explained why.

“I have to apologize,” Holdsworth said. “They put us in a room with no PA! We’ve been working on it, but it was their [expletive], not ours!”

How many people might not have noticed that rather mind-boggling oversight without that announcement is anyone’s guess, although the room was filled with knowledgeable musicians in general (like Jeff Beck’s Boca Raton-based drummer, Jonathan Joseph) and guitarists in particular (including Fort Lauderdale fusion icon Randy Bernsen).

Each trio member had monitors onstage to hear themselves and their bandmates, but there were no speakers facing the audience. It was as if the electric band had set up for a house concert, only to find out that 300 people had invaded that house and it was too late to change anything, including having a PA brought in.

The first half of the show, which ended up evenly split between Holdsworth’s solo material and tunes he’d recorded with Williams, suffered as the musicians and sound technicians scrambled to improve things. And gems like “Devil Take the Hindmost,” from Holdsworth’s masterful 1985 album Metal Fatigue, unfortunately got caught in the audio crossfire.

Donati complained that Holdsworth’s guitar had disappeared from his monitor, and it was only after that tune that the guitarist addressed the audience again to explain who he felt was responsible for the mishaps.

“You actually turned up my guitar in my monitor, not his,” Holdsworth said to the technicians in the sound booth. “I know we’re streaming this show, so I feel like the whole world is watching us sitting on the pot! What kind of manager books you at a place with no PA? And that manager, by the way, has been sacked!”

Hopefully for the sake of his manager Leonardo Pavkovic, Holdsworth was kidding.

The concert’s second half, aided by Williams gems from Believe It, some sound tweaks, and the trio’s adjustments to the PA-less atmosphere, improved significantly. Holdsworth’s expert chording, volume swells and effects were prominent through the night, but on the funky “Red Alert,” he was finally able to cut loose with one of his best and most audible solos. That was matched by the break of Donati, who played with dizzying, Williams-like speed and intricacy on his over-sized kit.

The staggered feel of “Proto Cosmos” was another highlight, featuring more Donati pyrotechnics within a vamp by Holdsworth and Haslip, and “Mr. Spock” closed the hour-plus set via a funkier arrangement than the raucous original Williams recording.

An encore certainly wasn’t a given, considering the drama of the evening, but Holdsworth walked out again and stepped up to the mic to express both his appreciation and frustration.

“We want to thank you so much for coming,” he said. “If I could give you all back your money right now, I would.”

“Metal Fatigue,” roared more than one audience member, despite the fact that the original 1985 title track had vocals by Paul Williams. “Red Alert,” shouted another wag, oblivious to the fact that the trio had already played it 45 minutes earlier.

“Letters of Marque,” suggested another. Holdsworth nodded and approved.

The lengthy track from his 1982 release I.O.U. proved climactic, with a banner solo by Haslip and great breaks, dynamics and interplay by all three players. Yet just as the sound had gotten as good as it possibly could, the show was over, after only an hour and 20 minutes.

Fagien thanked everyone for coming, and announced that Jazziz would present more shows in the resonant yet PA-free theater in the future, including his hope that Holdsworth would return. But the guitarist, whose touring schedule has declined as he approaches his 70th birthday, was around 40 years old the last time he appeared in South Florida — in the mid-1980s at the since-deceased Don Cohen’s famed Musicians Exchange venue in Fort Lauderdale.

This, however, was a completely different experience. To the trained eye and ear, there was value in watching one of jazz/fusion’s all-time great improvisers have to do so in ways he likely hadn’t experienced since his formative years of playing at garages, house parties and inadequate clubs. Holdsworth, Haslip and Donati all professionally overcame and did their jobs, but the headliner clearly wasn’t amused at facing such hurdles.

Having influenced most current electric guitarists worth mentioning, Holdsworth certainly deserved better. Considering the slowdowns in both his recording and touring schedules, and the troubling experience this time around, captured for broadcast, no less, the odds don’t appear good that he’ll ever return.

In fact, to borrow a term from his homeland, they’re probably nil.

Music: The very last concert Franz Joseph Haydn attended in his life was in March 1808, about a year … END_OF_DOCUMENT_TOKEN_TO_BE_REPLACED

Film: Major League Baseball culminates each season with the World Series, but to find the true … END_OF_DOCUMENT_TOKEN_TO_BE_REPLACED