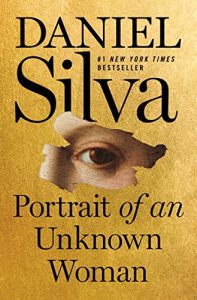 He settles on in Venice with his beautiful wife and two kids where he paints, enjoys classical music, gourmet home-cooked meals, happy times and a canal view. Soon he looks 30 years younger.

But no one reads Daniel Silva for domestic bliss. They want suspense, plot, intrigue. His 25th novel, Portrait of an Unknown Woman, delivers.

A woman is run off the road and murdered in France, on her way to meet an art dealer to expose a fake painting. The dealer, Gabriel’s friend, asks him to investigate the rediscovery and authenticity of a 400-year-old Van Dyck painting, Portrait of an Unknown Woman. To get at the truth, Gabriel must set up a sting, deceiving experts in the dark arts of art fraud.

Or as one of the characters says, “I know a provenance trap when I see one!”

A lot of thrillers have intricate plots. But Silva has so much more: his sense of humor, unusual way with words, his way of making the readers feel like they are in on the joke as he skewers Russian billionaires and Emirati princes.

At a café in Bordeaux, “He took stock of the other patrons…none appeared to be French. The rest were tourists, primarily of the package variety.”

Near the Gritti Palace in Venice, “There was not a tourist in sight. It was if a drain had opened…and washed them out to sea.”

Silva has us so totally into being deliciously snobby, effete Europeans that when Gabriel makes a side trip to the U.S. and gets coffee from Dunkin’ Donuts, it is an affront.

Silva is steeped in sophistication in real life. In his acknowledgments he thanks many friends, including: Peggy Noonan, David Remnick, Henry Winkler, Marie Brenner, Bob Woodward and Anthony Scaramucci, founder of Skybridge Capital and Trump’s White House director of communications for 10 days in 2017.

In Silva’s world, a drink isn’t just served cold. It’s brutally cold. Frigid even. And a martini is “Saharan dry.”
Silva improves the old expression, “He could sell ice to an Eskimo” to, “He could sell sand to a Saudi.”

His descriptions of characters are entertaining.

Another character appears. “She was a slender woman of erect carriage, with short dark hair and the unblinking, too-wide eyes of an Apple emoji.”

A Corsican don “launders the profits of death” and has “…the brown-streaked eyes of a canine.”

“He was as English as high tea and bad teeth.”

As for a Hamptons gold digger, “She doesn’t know a Van Dyck from a Van Gogh.”

Silva moves with the times. There’s a mysterious Spanish lady who arouses suspicion because she is not on LinkedIn.

Maybe the author had Gabriel retire at this late date because he was out of espionage options. He is now famous for having survived an assassination attempt by an addled U.S. congresswoman. Most everyone recognizes him.

As someone tells him, “For a man of the secret world, you have a rather famous face.”

But Gabriel assures his friend that he has recovered from being shot and is left with “Only an abiding concern for the future of American democracy.”

Perhaps the worlds of politics and art have something in common. Falling for the Big Lie.

Silva notes that the secret of the art world’s success comes from, “The gullibility of collectors and so-called experts and connoisseurs. The art world desperately wants to believe that there are lost masterpieces just waiting to be rediscovered.”

This is the line that best sums up the book:

“I’m an art dealer…If I was interested in ethics, I’d be working for Amnesty International.”

This novel can be read as a “stand-Allon.” Silva inserts clues to update new readers and those who read the series out of order.

Silva left journalism in 1997, the same year he published the first Gabriel Allon book. At the time, he was CNN’s executive producer of talk shows.

Ten years earlier, he met and married NBC Today national correspondent Jamie Gangel. Today she is a CNN special correspondent and edited the first draft of his 600-page Portrait of an Unknown Woman manuscript.

Their journalism background shows. The novel is packed with descriptions of real people, places and situations.

Silva has the boilerplate disclaimer at the front of the book. But at the back are eight pages of author’s notes, explaining what is real and what is not.

For instance, Silva’s recurring character, ex-CIA, now an art dealer, “had also served briefly as the art adviser to the crown prince of Saudi Arabia. Indeed, it was Sarah who had convinced His Majesty to plunk down $450 million on Leonardo da Vinci’s Salvator Mundi, the highest price ever paid at auction for a work of art.”

Yes, Christie’s sold that fully authenticated painting in 2017. But the Louvre proved skeptical. The Prado downgraded it. Worldwide lawsuits, a book and two scandal documentaries, so far. The painting hasn’t been seen since the purchase.

So once again, life imitates art, which imitates Silva.

Sharon Geltner is the author of Charity Bashed, a Palm Beach mystery and social satire, available on Amazon.

Film: Playwright August Wilson began his chronicle of the African-American experience throughout the … END_OF_DOCUMENT_TOKEN_TO_BE_REPLACED

Film: Just in time with the opening of movie theaters in Palm Beach County comes the season’s most … END_OF_DOCUMENT_TOKEN_TO_BE_REPLACED

Music: The very last concert Franz Joseph Haydn attended in his life was in March 1808, about a year … END_OF_DOCUMENT_TOKEN_TO_BE_REPLACED