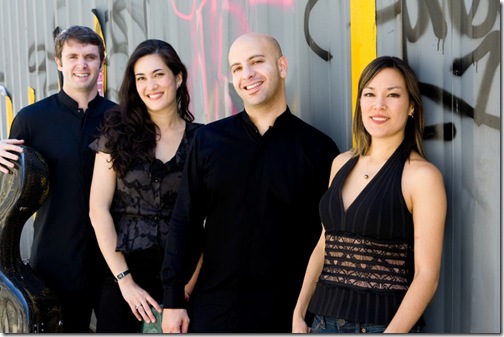 One of the joys of seeing small concerts that are part of a good music series is that you get to hear not just the venerable players but the rising stars.

Surely Tuesday night’s performance at Palm Beach’s Flagler Museum by the Enso String Quartet was a case of seeing a young ensemble on the cusp of something really big, and its performance justified the wisdom of Grammy representatives who nominated the group’s work last year for honors.

The Enso, founded in 1999 by a group of Yale students, opened the season’s series of concerts at the Flagler with a performance that was as polished, exciting, and definitive as it could have hoped to be, and suggested that the quartet’s ability to present music of three completely different idioms so persuasively puts it in the running for the mantle of Quartet of the Future.

Violinists Maureen Nelson and John Marcus, violist Melissa Reardon and cellist Richard Belcher showed from the very opening bars of the second Razumovsky Quartet of Beethoven (No. 8 in E minor, Op. 59, No. 2) the kind of unity and multiplicity that make for exceptional quartet playing. The chords and the first motif cadences were precise and exactly in line, and at the same time they had a special color in which the distinctive sounds of each player could clearly be heard.

The opening movement also demonstrated the Enso’s command of dynamics, and not just the difference between a whisper and a shout. In the group syncopation passages, the quartet built firmly and as one into the releases, which they didn’t hammer or overemphasize; this is a group that knows the difference between mezzo-piano and mezzo-forte, forte and fortissimo, and observes them.

In the lovely second movement, first violinist Nelson played her operatic scale passages beautifully in tune as they floated into the highest reaches of the E string above the quiet chords of her partners, and in the third, the Enso’s scrupulous attention to louds and softs, plus the tightness of its ensemble, brought out the opening section’s mystery and shock in ideal fashion.

The Ensos chose a good, snappy tempo for the finale, and peeled off the three-note motifs that are a significant dramatic element in the movement with machine-like accuracy, but without sounding rigid or in fear of losing the pulse. This was a stellar performance of this great piece, one that showed off Beethoven’s expansive view of the string quartet medium to excellent effect.

Following the Beethoven was a classic of a very different sort: The Six Bagatelles (Op. 9), written in 1913 by Anton Webern. These are extraordinary works, tiny and full of atmosphere, sounding as though the world of music had stepped back to retune and reexamine all of its tonal assumptions.

The Enso’s precision and fidelity to dynamic detail, so laudable in the Beethoven, was absolutely paramount here, and its devotion to the explicitness of Webern’s directions allowed the music to evanesce. There was a palpable sense of tension, too, in the fifth bagatelle, which focused the ear admirably on the flecks of color the composer took such pains to paint.

Best of all was the final work on the program, the Quartet No. 2 (in A, Op. 68) of Dmitri Shostakovich. This was the finest reading of the piece that I have ever heard, a magnificent realization of the score and terrifically exciting music-making to boot. It was standout Shostakovich that perfectly embodied his style, and made an unimpeachable case for it as an essential part of the canon.

The opening movement (Overture) had all the folk-flavored zest and power the Enso could bring to it, and it worked marvelously. From the big-bowed opening chords to the climbing five-note motif that runs throughout the piece, it had an irresistible crackling force that radiated optimism and energy.

Nelson’s playing of the elaborate second-movement recitatives was splendid, with big, rich tone and maximum expressivity, even without much of the Russian-school style of emotive vibrato. The motif that serves as the unifier of the second section was introduced with gratifying gentleness, further evidence of the care this group lavishes on detail.

Cellist Belcher’s account of the third-movement waltz theme was lovely, full of dark color and sensitivity, and the half-light in which Marcus and Reardon continued the afterbeats was deeply effective and well-suited for Shostakovich’s gloomy death-dance. The finale’s opening unison passage had the same forceful breadth of the first movement, and the variations that followed – beginning with hauntingly beautiful playing by Reardon — showcased an ensemble that was able to handle the varied demands of the music and not lose sight of its narrative.

Maybe the most gratifying thing about this Shostakovich was the sheer feeling of life and vigor the Enso brought to it without shortchanging its profound melancholy. This was a Shostakovich that was sorrowing at times but not inert, and its overall effectiveness was increased by the group’s full embrace of the composer’s Russian roots music.

Film: Playwright August Wilson began his chronicle of the African-American experience throughout the … END_OF_DOCUMENT_TOKEN_TO_BE_REPLACED

Film: Just in time with the opening of movie theaters in Palm Beach County comes the season’s most … END_OF_DOCUMENT_TOKEN_TO_BE_REPLACED

Music: The very last concert Franz Joseph Haydn attended in his life was in March 1808, about a year … END_OF_DOCUMENT_TOKEN_TO_BE_REPLACED