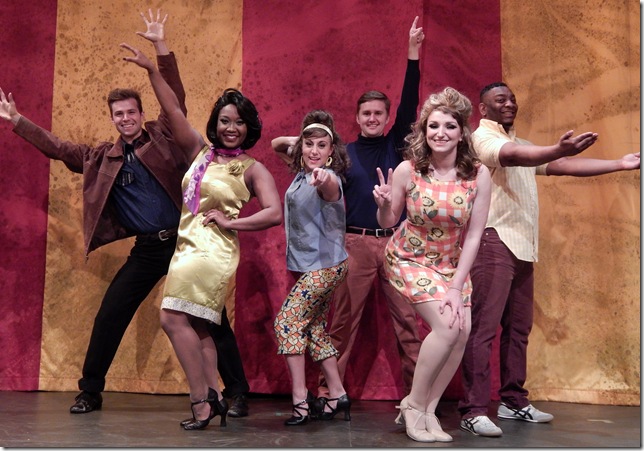 What’s New Pussycat? The Soundtrack of an Era is about to finish its second run in less than two years at the Broward Stage Door Theatre.

Created by Broadway-trained director Michael Leeds and collaborator/choreographer Kevin Black in the manner of a jukebox musical, the show pulls together about 50 songs — full tunes and medley versions — and segments them into a half-dozen categories.

Vocalizing duties fall to three women and three men — in various multiples and, sometimes, all by themselves. The singers have delightful voices. And while this is certainly a good thing, it does result in the occasional aw-shucks moment when the person or people on stage can’t quite duplicate the original song style. (The sextet doesn’t sing “Fixin’ to Die Rag” the way Country Joe & the Fish did at Woodstock, for example.)

But if the audience wanted exactitude, they could just pull up songs on their iPhones. And what fun would that be?

The night we attended, everyone seemed pleased with the production. And while the stage was generally bereft of scenery, props were really not necessary. A big newspaper front page projected on a screen at the rear of the stage allowed everyone to focus their attention on the passage of time as headlines changed and updated.

The show contains a varied song arrangement that doesn’t concentrate on the same list of “oldies” normally plucked for a tribute to the musical 1950s and 1960s.

Actually, Leeds and Black concocted What’s New Pussycat? during the summer of 2014 when they found themselves with an open space in the production schedule. What began as a paean to Burt Bacharach and Hal David turned into a tribute to an era. The song choices became more flexible, allowing “Dancing in the Streets” to stand next to “The Loco-Motion.” “California Dreamin’” and “Do You Know the Way to San Jose?” are performed one after the other. Motown and blue-eyed soul are equal in the audience’s ears. And then, of course, there is the Tom Jones specialty, “What’s New, Pussycat?” 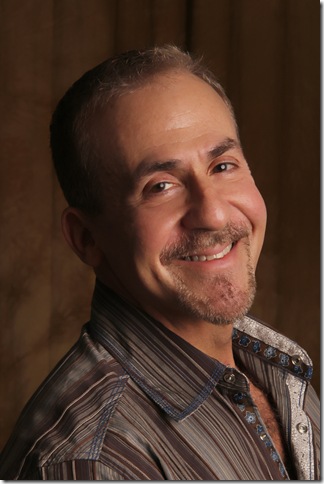 Leeds and Black actually created a second oldies show called Pompadour that Broward Stage presented just after the New Year. If you saw that show, then see What’s New, Pussycat? and get a feeling of déjà vu, well, there’s a good reason. The co-creators went to the Pompadour well and re-enlisted the three male singers — Brandon Godfrey, Preston Grover and Jay Wilkinson — for another run. The distaff vocals in Pussycat are performed by Jessica Bennett, Caitie L. Moss and Dana Reminsky.

The songsters score a lot of aces in this show. Godfrey belts out the Tom Jones title tune with great aplomb, leading into a Beatles set that features “We Can Work It Out” (Moss and Wilkinson); “Yesterday,” (Grover) and “Eleanor Rigby” (with Reminsky in the lead). Everyone chimes in for “The Long and Winding Road” and “Hey, Jude.”

Harmony is the name of this show’s game. The six performers take a half-dozen musical roads in Simon and Garfunkel’s “Bridge over Troubled Water.” Henry Mancini’s wonderful “Moon River” gets the full treatment — including an a cappella verse.

The final set is perhaps the most entertaining since it draws music from movies and involves lots of costume changes. Bennett does a sensational version of “Goldfinger” and Grover tickles our funny bones with his version of “Mrs. Robinson.” He sings to photos of Queen Elizabeth II and not Anne Bancroft.

As Moss sings “To Sir with Love,” photos of Sidney Poitier flash on the screen. Next, Reminsky steps to the front and offers a mellow performance of “What Are You Doing the Rest of Your Life?”

Fans of the original Seekers will love “Georgy Girl,” with Moss and Reminsky echoing the tones of Judith Durham and her Australian cohorts who just celebrated 50 years of performing.

You won’t forget Godfrey’s wonderful version of “Georgia on My Mind” or Grover’s rendition of “Unchained Melody.” This is followed by “You’ve Lost That Lovin’ Feeling,” featuring all three guys in a righteous performance of the Righteous Brothers song.

What’s New Pussycat? The Soundtrack of an Era wraps up with a 2 p.m. matinee Sunday at the Broward Stage Door Theatre, 8036 West Sample Road, Margate. For tickets, call 954-344-7765 or visit www.stagedoortheatre.com

Film: Playwright August Wilson began his chronicle of the African-American experience throughout the … END_OF_DOCUMENT_TOKEN_TO_BE_REPLACED

Film: Just in time with the opening of movie theaters in Palm Beach County comes the season’s most … END_OF_DOCUMENT_TOKEN_TO_BE_REPLACED

Music: The very last concert Franz Joseph Haydn attended in his life was in March 1808, about a year … END_OF_DOCUMENT_TOKEN_TO_BE_REPLACED