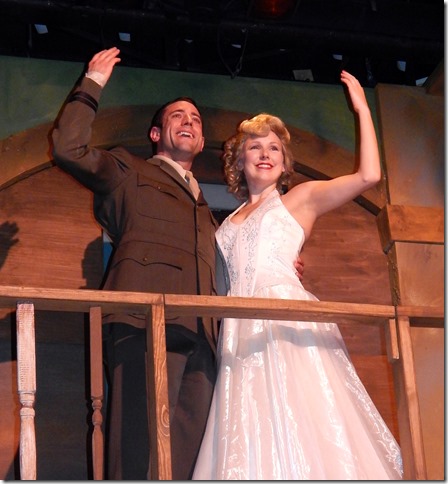 Evita, the rock opera conceived by composer Andrew Lloyd Webber and lyricist Tim Rice at the height of their musical collaboration, has been packaged, repackaged and committed to celluloid since it was released as a concept record album 40 years ago and hit the stage in London two years later.

Director Michael Leeds and choreographer Kevin Black return to the Margate venue for the third time this season to oversee a gracious and moving production of the Webber-Rice musical memoir, one filled with the grandeur and pathos so typical of Eva Peron’s life.

The five lead actors are stellar choices, not only for their stage and vocal skills, but for demeanor. Rick Hvizdak and Jenna Pastuszek seem larger than life as Argentine President Juan Peron and his second wife, Eva (known by the Spanish diminutive, Evita). To the downtrodden denizens of Buenos Aires and its environs, she was as close to royalty as they could get.

“Kevin and I were attracted to this story of a woman who journeys from being an illegitimate, poverty-stricken child in the pampas of Argentina to becoming the most powerful woman in the world at age 26,” said Leeds, a Broadway-trained veteran director.

The lead actors include Trevor Whittaker, an Australian well-schooled in the ways of music and theater. He portrays Ché, the narrator and revolutionary voice who often acts as a foil to Evita throughout the show. Kasey Yeargain is excellent as the easily influenced tango singer Agustin Magaldi, and Idalmy Carcache portrays Juan Perón’s mistress, perhaps best known for getting booted off the premises by Evita. The mistress ponders her fate in the hauntingly sad, “Another Suitcase in Another Hall.”

Evita is known for its excellent score, which includes the Latin-inspired “Buenos Aires,” “I’d Be Surprisingly Good for You” and “Don’t Cry for Me, Argentina,” sung twice in very different circumstances.

An ensemble of fine performers backs up the main players. Some familiar, talented folks can be found among the background performers, including Elijah Word, a tall, imposing gentleman with a voice that soars, and Victoria Lauzun, who did such a great job portraying Edith Piaf in the show about the famed French singer.

Evita opens in Buenos Aires, where an audience is watching a film (“A Cinema in Buenos Aires, 26 July 1952”). An announcer interrupts with the message (begun in Spanish, but fading into English) that “Eva Perón entered immortality at 20:25 hours this evening…”

The heartbroken audience sings “Requiem for Evita” (in Latin, which is modeled after a Catholic requiem). Ché sarcastically assesses the hysterical grief that gripped Argentina when Evita died (“Oh, What a Circus”). 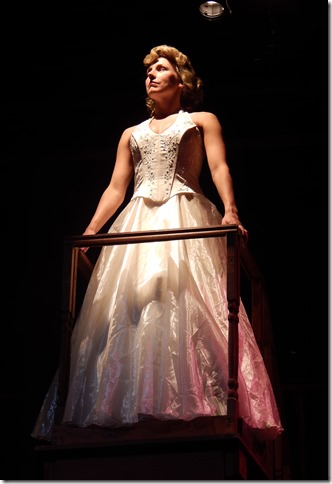 The action flashes back to when 15-year-old Eva, in 1934, has her first love affair with Magaldi after she meets him at one of his shows (“On This Night of a Thousand Stars”). Eva blackmails him into taking her with him to Buenos Aires. Though initially resistant, he eventually surrenders (“Eva, Beware of the City”).

Thus begins her climb to fame. She meets and weds Juan Perón. He is elected president and, together, they move ahead. Act I ends with the gripping, march-style song, “A New Argentina,” with Eva assuring Juan that the people support him and hope for a better future with this new regime.

Act II tells of Eva’s collapse. She becomes ill on her “Rainbow Tour” of the world. As criticism of her spending and extravagance continues (“The Chorus Girl Hasn’t Learned,” “And the Money Kept Rolling In”), she becomes sicker. Eventually, she makes “Eva’s Final Broadcast,” a sadder, difficult version of “Don’t Cry for Me, Argentina” before she slips away, dying of cancer at age 33.

“Because the tango is such an integral element, Kevin and I have set the entire show in a tango bar,” said Leeds. The scenery is extraordinary, and can be moved around to accommodate scene changes. Much credit to Stage Door Scenic for construction and to Jerry Sturdefant and Larry Baumann for costumes. 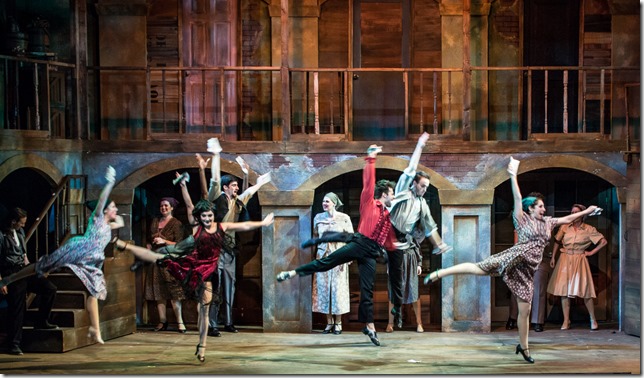 New Yorker Pastuszek has a stance that’s stately and a voice that fits the Webber tunes nicely. She sings sweetly, with hints of Sarah Brightman tones.

She and Hvizdak, who just completed a run in Promises, Promises and appeared as the Professor in South Pacific at the Wick, stands and speaks commandingly, with authority, in this show.

Whittaker came over from Great Britain to take the role as Ché. He has performed in other Webber shows and studied voice and guitar in Australia. He plays guitar on a couple of the songs in Evita, and has an excellent visual presence and voice that crackles with revolutionary fervor.

Yeargain has a background in musical theater and opera, but shows only a bit of that talent in this show as the tango singer who is quickly and easily duped by the young Evita.

Carcache has a small, but powerful role as Perón’s outgoing mistress, which shows her abilities and stage presence. She comes back out as part of the ensemble.

Evita concludes with shows Saturday and Sunday at 2 p.m. at the Stage Door Theatre, 8036 West Sample Road, Margate. Tickets are available by calling 954-344-7765 or visiting www.stagedoortheatre.com.

Film: Playwright August Wilson began his chronicle of the African-American experience throughout the … END_OF_DOCUMENT_TOKEN_TO_BE_REPLACED

Film: Just in time with the opening of movie theaters in Palm Beach County comes the season’s most … END_OF_DOCUMENT_TOKEN_TO_BE_REPLACED

Music: The very last concert Franz Joseph Haydn attended in his life was in March 1808, about a year … END_OF_DOCUMENT_TOKEN_TO_BE_REPLACED