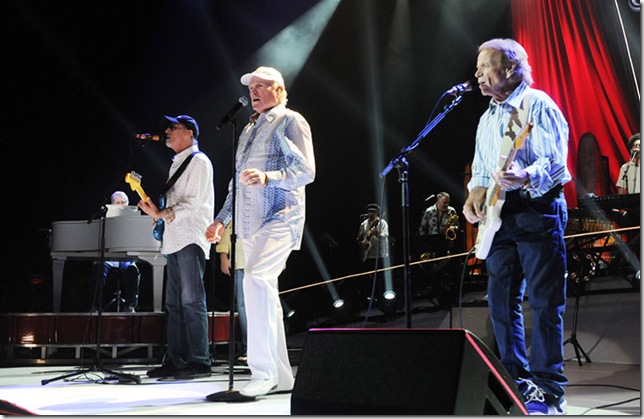 HOLLYWOOD ― “It was a rough night,” Mike D’Amico sighed as he poked through the offstage drapes to deliver a couple of passes to waiting friends at Seminole Hard Rock.

No chance to explain, only to say before returning to his dressing room that he hoped to make it home to Lake Worth “sometime in September.”

But any reason is plausible, since D’Amico is adopted: He’s a member of perhaps the most dysfunctional family in show biz history, and therefore a key element of The Beach Boys 50, this time on bass.

The experience is hardly alien or alienating to D’Amico, who’s been involved with the Brian Wilson wing of the family for nearly 15 years. Previously he performed as a drummer.

But then D’Amico was made for these times. As a member of the Wondermints, a Los Angeles-based power-pop band, he can play just about any instrument. Some of the band’s music has a Beach Boys ring to it, so when Wilson hit the road in 1999, he took them along. Several more tours and recording sessions followed.

But just like the crowds come and go at any surf beach, so, too, has the Beach Boys lineup shifted over the decades. God only knows how many individuals have actually been “Beach Boys” while recording more top 40 hits (36) than any other American band.

In the beginning (1959) were the Wilson brothers ― high schoolers Brian, Carl and Dennis ― with cousin Mike Love as “Carl and the Passions.” Al Jardine came on board and The Pendletones were born in 1961, only to die when Candix Records changed the label on their first record, Surfin’, to The Beach Boys. On New Year’s Eve 1961, they played a Richie Valens memorial show, following Ike and Tina Turner. Two months later, Jardine quit, and two months after that, David Marks, then 13, signed on.

In 1963, Jardine returned and Marks left. Glen Campbell joined in 1964 and was replaced by Bruce Johnston in 1965. Other notables included Daryl “The Captain” Dragon and Toni Tennille, Carl’s brother-in-law Billy Hinsche (Dino, Desi and Billy), actor John Stamos and John Cowsill (of the Hair-y Cowsills). 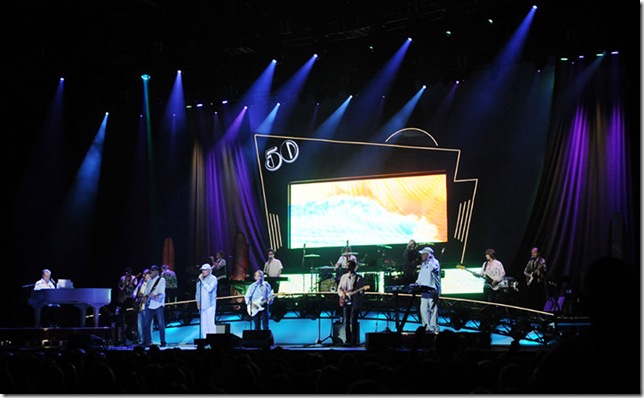 Over the years, as Carl and Dennis died, Brian battled psychological and chemical demons, and members sued members, Jardine (fired from the band in ’98) and Love launched their own touring bands. Johnston hung around most of the time, and in 1997 Marks returned for a couple of years and was officially recognized as an original Beach Boy before leaving two years later to battle hepatitis C.

Twisting here, stretching there, The Beach Boys easily could have been the rubber band. That stint with Glen Campbell, for example, evolved from his session work with the band that actually played the instruments on some of the Beach Boys hit records.

Campbell, among others including Leon Russell, was part of The Wrecking Crew, a talented but unheralded group of studio musicians. They were mostly well-known for providing instrumental work for the likes of The Monkees, Carpenters, the early Byrds, Simon and Garfunkel, even Frank Sinatra and Elvis. 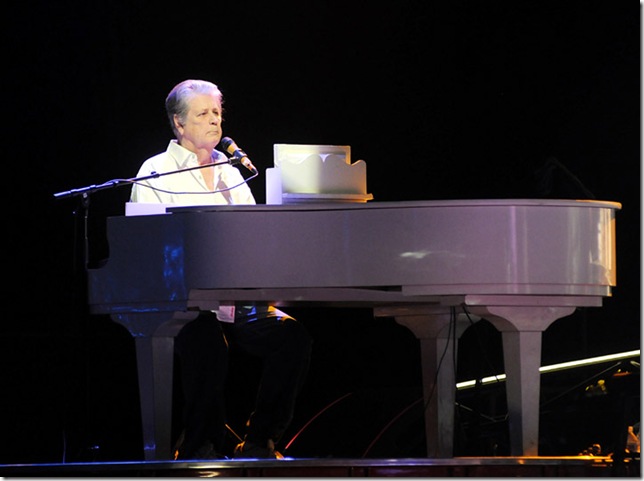 Fast-forward half a century: Brian’s interview on CBS Sunday Morning the week before the group’s May 4 concert at the Hard Rock Live in Hollywood had viewers wondering if he was capable of playing anything. Definitely not the sharpest pin in the cushion, yet with a little help from his friends, he played piano and even plucked a few notes on a bass and tried a few steps with lead guitarist Jeff Foskett.

Meanwhile, D’Amico was on the back riser carrying out the serious bass line. The Wondermints were there, and elements of Love and Jardine’s splinter bands – a wacky family reunion of sorts. Just as The Wrecking Crew did in the ’60s, this bunch was there to bring that sound to life.

It’s all about the music, and what a celebration it was when they did get to South Florida, beginning with Jardine’s invitation to “get together and do it again.” The joint never stopped rocking. In remarkable harmony (even Brian),with rousing falsetto by Foskett, they romped in rough chronological sequence through surfing songs, high school angst and romance and hot rods. Love’s banter provided context, for example, explaining to the youngsters in the house the meaning of “flip side.”

Be True to Your School. Fans dressed as cheerleaders with pompoms dance in the center aisle. Wouldn’t It Be Nice? Everyone is on their feet, singing along and batting beach balls.

Tributes to the late brothers follow: a video screen shows clips of an eerily Lennonesque Dennis singing Forever and Carl offering the plaintive God Only Knows. Taking cue from his brothers, Brian sums up the evening with his new single, That’s Why God Made the Radio:

So tune right in, everywhere you go

He waved His hand, gave us rock ‘n’ roll

The soundtrack of falling in love

That’s why God made the radio

Making this night a celebration

Spreading the love and sunshine

To a whole new generation

After an exhaustive 40 songs, they left the stage, only to return with Bruce Johnston declaring, “It’s the weekend; we can stay later,” and close with Kokomo, Good Vibrations and Fun, Fun, Fun.

Back to reality. There’s no place “off the Florida Keys” called Kokomo, and Daddy didn’t take the T-Bird away: Ford quit making it. But even if Brian’s launch of Good Vibrations was a bit rough, the Beach Boys have proved they still can get around. 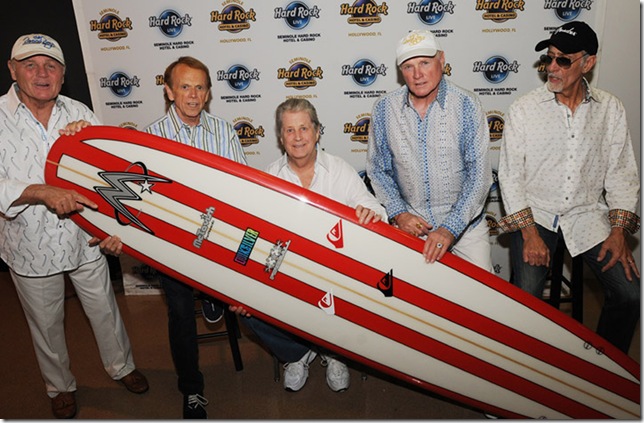 8. Then I Kissed Her

9. The Little Girl I Once Knew

31. I Just Wasn’t Made For These Times

Film: Playwright August Wilson began his chronicle of the African-American experience throughout the … END_OF_DOCUMENT_TOKEN_TO_BE_REPLACED

Film: Just in time with the opening of movie theaters in Palm Beach County comes the season’s most … END_OF_DOCUMENT_TOKEN_TO_BE_REPLACED

Music: The very last concert Franz Joseph Haydn attended in his life was in March 1808, about a year … END_OF_DOCUMENT_TOKEN_TO_BE_REPLACED