To ask an audience to explore unseen works by a popular or a controversial artist is piece of cake. Asking them to come see rare works by a less shocking artist, unknown by most, takes guts.

But that’s precisely what the Norton Museum is doing with John Storrs: Machine-Age Modernist, a show consisting mainly of metal and stone sculptures by the Chicago native who happened to be a big fan of Frank Lloyd Wright and a student of Auguste Rodin.

Now and then we see a drawing or an abstract painting hinting at the willingness of the artist to explore other mediums or maybe adjust to the hard times. Take these paintings and drawings as Storrs’s warm side. Everything else here is rigid, heavy, emotionless, cold and silent, bulky when not elegant and, because of all of this, very modern. We should know.

The sleek structures, which resemble skyscrapers and towers then emerging in big cities such as Chicago and New York, are made of mixed metals including steel and copper. They represent a familiar subject, are straightforward and easy to comprehend, but they don’t feel very personal. Even the titles suggest a certain distance.

That doesn’t mean we can’t appreciate the elegant lines, natural color variations from the metals and geometric patterns on the pieces. But as soon as we do, we feel like moving on.

These and larger details can easily go unnoticed if we rush through the brief exhibit.

Watch for the repetition of triangles on the 1924 bronze piece Study in Form (Forms in Space) and for the rhombus pattern on Study in Architectural Forms (c. 1927). Take Abstract Form No. 1 (c. 1917-19), which is the first granite sculpture as we enter the second gallery room. If abandoned too quickly, we would never discover the bird-like creature that seems to be taking flight, and that those straight lines are actually wings.

The cemented coldness and silence found on Storrs’s sculptures are not restricted to buildings. Why should humans escape that notion? They don’t.

An example of this greets us early on, at the entrance of the exhibit and to the left of the welcome panel. A shiny robot-like expressionless lady stands erect. She is Ceres, the Roman goddess of agriculture, and appears holding a bag of grain in her right hand and stalks of wheat in her left hand. Her hair is in a bun and although her breasts are emphasized, the piece as a whole appears very masculine. Storrs created this nickel-plated model in preparation for a larger piece that was to go on top of the Chicago Board of Trade Building. The final 31-inch aluminum sculpture remains over the building today.

Smooth and curvy, My Daughter in Winter Costume is a stone sculpture featuring a young girl, shy or reserved, with her fe 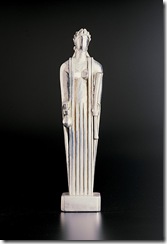 et bent slightly  inward as if she had just asked to go to the restroom and was still holding it. It is too dark in color for such a young subject, especially when compared to the terracotta Modern Madonna next to it.

This one, a much lighter piece, depicts Mary holding baby Jesus; his face buried in her arm while she looks to the side. As the Winter Costume sculpture, she has no facial features, but the lines of her drapery and those suggesting her loose hair let us know she is human.

Along with Figurative Abstraction, these are the warmest pieces of the show. In Abstraction, the central figure, a nude boy, is not yet completely freed from the block of marble. He is walking away from us as if returning to the place of his birth: the block. A hand from the right welcomes him and is placed directly between his neck and back, as if to prevent him from looking back at us. From the left, a hand reaches out and touches his left hand.

The subtle separation here between background and subject reminds me of Michelangelo’s bas-relief Madonna of the Stairs and is the reason why I like it the most. It’s not just the warmest piece but the one tempting the artist the most. That it appears incomplete is only a sign of the artist’s exercised restraint and control in not carving too much. I love how delicate and less studied it seems, next to the others, even if it’s not a feeling that lasts.

The museum did a good thing in bringing to West Palm Beach something rarely shown. One appreciates the thought. If given the choice, I would rather have the John Storrs show than not have it. But that’s just curiosity speaking and curiosity doesn’t need three months to be 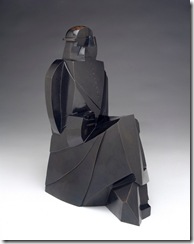 satisfied. Many museum guests could walk this exhibit in 15 minutes, and that’s the curious ones.

Most will not make it to the gallery room displaying Storrs’ works. Their attention will probably be grabbed by more exciting paintings or the other new show running simultaneously, Nick Cave: Meet Me at the Center of the Earth, which couldn’t be more colorful, energetic and alive.

Machine-Age Modernist has, in turn, nothing to do with energy or shock. It has a lot to do with our present day. The mechanization of humanity is after all an ongoing process.

Because I don’t want to make you angry (anger is not allowed in a modern perfect world), I’ll say the show is as captivating as our present time. How much is that? I’ll let you decide.

Film: Playwright August Wilson began his chronicle of the African-American experience throughout the … END_OF_DOCUMENT_TOKEN_TO_BE_REPLACED

Film: Just in time with the opening of movie theaters in Palm Beach County comes the season’s most … END_OF_DOCUMENT_TOKEN_TO_BE_REPLACED

Music: The very last concert Franz Joseph Haydn attended in his life was in March 1808, about a year … END_OF_DOCUMENT_TOKEN_TO_BE_REPLACED