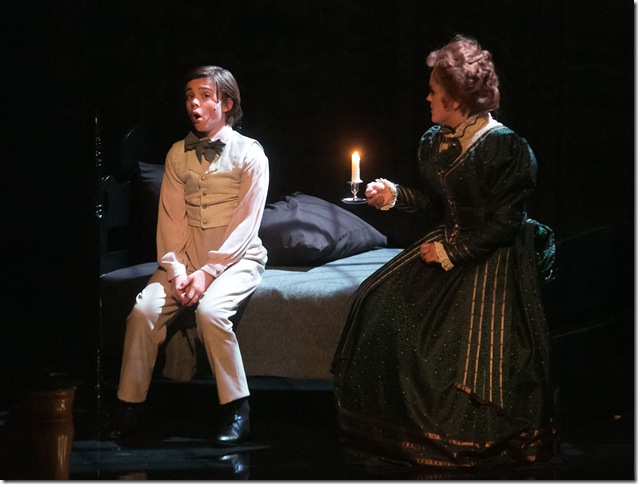 It is not too much to say that Palm Beach Opera inaugurated a new and exciting era for itself this week with its two presentations of Benjamin Britten’s The Turn of the Screw.

And as it happens, it was quite a good production, with strong singing, smart staging and good orchestral playing of a very challenging score, and the company can justly be proud of it. But the most important victory may be that the opera troupe decided to do this at all ― adding a fourth fully staged opera to its season, but casting it entirely with young singers, mounting it at completely different theater, and choosing repertoire that would be a much tougher sell at its usual home at the Kravis Center.

The Turn of the Screw premiered in 1954, when the world of classical composition was in the throes of fiercely atonal modernism that grew even more prevalent in the two decades that followed. Britten was never an atonal composer, but this opera is based on a 12-note theme, varied 15 times, and its uncompromisingly bracing language might have been a tough go for some members of the audience. Yet it is a cannily conceived work whose sound world so perfectly reflects the story’s claustrophobic insularity that it’s hard to imagine it being approached differently.

The members of the Young Artists Program handled this assignment with a highly satisfying level of musicianship. The opera’s vocal lines are sometimes all-out cantilena, as in key passages for Peter Quint, while for the governess and Mrs. Grose, moments of intense emotion are occasionally expressed in formidable vocal leaps that take good ears and careful practice to manage. But manage them they did, and admirably well.

In addition to the young people on stage, students from the Lynn University Conservatory of Music provided the chamber orchestra at the Wold Performing Arts Center, and they, too, performed impressively, inhabiting Britten’s brilliant orchestration to the fullest. 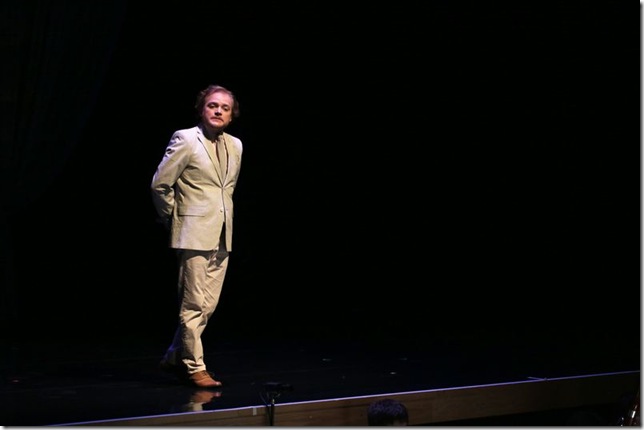 Minnesota-based director Doug Scholz-Carlson, working in a hall built for concerts and recitals rather than stage productions, was fortunate in not needing big sets to get the action across; the minimalist props ( a bed, a desk, a piano), moved around by supernumeraries dressed as domestics gave the opera all the set pieces it needed. He also used a series of diaphanous curtains behind the singers for video backdrops in which the scenes at church and outside the estate at Bly were mistily projected; their most prominent use was for giant close-ups of the ghosts’ faces and upper bodies as they sang and beckoned the children into the unknowable hereafter.

Because of the psychological nature of this story, the narrative of the opera has to move from mounting unease into all-out spectral confrontation without being campy. Finding the right way to do that is a matter of subtle adjustment, and in the performance Sunday afternoon, the second act was a good deal more involving than the first, and not just because of its dramatic denouement. The first act was sluggish, and much of it had to do with the establishment of the ghostly presences. It wouldn’t have been necessary to have them jump out of the bushes and shout “Boo,” but having the ghosts more in evidence early on – Quint’s first appearance in the Henry James novella is explicit, but in the staging here it was mysterious – would have given the action more forward motion.

And I don’t think it would have taken away the audience’s doubt about whether they were real or illusory phantoms. Scholz-Carlson’s direction overall was clear and thoughtful, the only other questionable decision being the stasis at the beginning of Act II, with its mimetic tableaux of children torn between humans and now-vaporous former humans. Here again, a little more obviousness in the silent action would have made the intention clearer (though having the governess kiss Quint was a nice touch).

As the governess, Bonnie Sherman Brown displayed a pretty voice of light color and high muscularity, and she was impressively accurate in some of the more strenuous passages in which she had to jump suddenly into her upper registers. There is a lot of bloom in her voice, an ability to summon up a good deal of power (if not weight) that made her characterization very effective. Her acting was somewhat stiff, and while the opera doesn’t give her a great amount of leeway, one senses that with some more performances she would have been able to find more things to do. 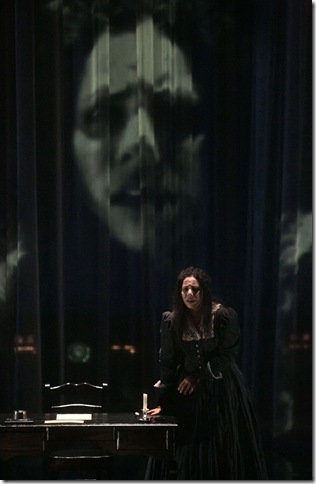 By contrast, Megan Marino, who sang Mrs. Grose, was able to say a lot with just a little in something as simple in the officious, official way she walked offstage or in the way she used her body to shield Flora from the governess in the final scenes of the second act. Marino’s voice is big, darkly colored and powerful, and she, too, had an exceptionally difficult part to sing, and she sang it with great strength. When she and Brown joined voices on high at the end of the first act, they created a thrilling sound together.

Both of the ghosts were excellent in this production. Tenor Kyle Erdos-Knapp sang his call to Miles, which on paper looks absurd, persuasively and stylishly, no mean feat for such an unusual piece of writing. His voice grew in menace and stature as the opera went on, and the essentially tense-but-soft quality of his voice made him a distinctive and memorable Quint.

The Canadian-Iranian mezzo Shirin Eskandani was a splendid Miss Jessel, especially in the second-act aria in which she remembers the room where her “tragedy” began. Eskandani sang this wonderfully creepy music, with its insistent bassoon triads marking time like a clock with evil on its mind, with an unmistakably real feeling of a woman wronged. It was terrifically exciting, and central to the movement of the rest of the opera from that point.

Alexandra Batsios sang and acted well in the ungrateful part of Flora, especially when her anger toward the governess builds to a climax. Sidney O’Gorman, a 13-year-old student at the Bak Middle School of the Arts, was very good, and affecting, as Miles. His singing was generally good, though his Malo song was a touch too careful, and so hard to believe as something he had just “found,” and his treble is rather soft and sometimes hard to pick out.

But his piano miming was very good (he’s a pianist, too), and he spat out the closing line ― Peter Quint, you devil! ― sharply, and with English accent intact. He is a conscientious actor and singer, and his laudable professionalism helped him craft a believable, sympathetic Miles.

Greg Ritchey led the Lynn orchestra adeptly, and there was particularly fine playing from the percussion, harp, piano, oboe and clarinet players, all of whom had elaborate and important solos. It was a small ensemble, but it made a huge sound, especially during the church scene, with its intense brass and chime coloring.

Palm Beach Opera hopes to continue these productions, and next year at this time is considering a rarity: Xavier Montsalvatge’s puppet opera El gato con Botas (Puss in Boots), which the Catalan composer wrote in 1948, and which received a much-heralded revival at Gotham Chamber Opera in 2010.

It’s a great choice, but whatever opera the company chooses, continuing to do these young-professional productions at Lynn is a marvelous idea, and it stands fair to open up a whole new way of thinking about this opera company and the role it plays in our local arts universe.

Film: Just in time with the opening of movie theaters in Palm Beach County comes the season’s most … END_OF_DOCUMENT_TOKEN_TO_BE_REPLACED

Music: The very last concert Franz Joseph Haydn attended in his life was in March 1808, about a year … END_OF_DOCUMENT_TOKEN_TO_BE_REPLACED