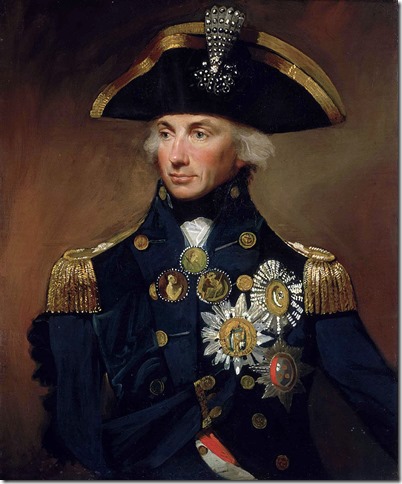 The Master Chorale of South Florida closed its current season with a remarkably energetic and gritty Haydn mass that said positive things about the chorus and augured good things for its future.

Joined by a chamber orchestra from the Lynn Philharmonia in its concert May 1 at Lynn’s Wold Center for the Performing Arts, the Master Chorale and four fine soloists gave a bracing account of the Lord Nelson Mass, handling its many passages of contrapuntal complexity with confidence and vigor.

In addition, the concert opened with a surprise: the first movement of the Symphony No. 25 (in G minor, K. 183) of Mozart, played very ably by the Lynn student musicians. It made a strong case for the idea of creating a separate chamber ensemble at Lynn that could present additional concerts of smaller-forces repertoire like this piece.

Master Chorale director Brett Karlin led the Mozart with great energy, bouncing up and down on his heels as he moved the music along through its dramatic high points. The horns, which play such a key role in the echo of the second half of the main theme, sounded good and strong, and the oboist was equally fine. Karlin’s tempo struck me as just right, a tempo that unleashed the remarkable power of this work by the teenage Mozart, one of his first great compositions.

Karlin could have given the music a bit more dramatic contrast; the pianissimo tag before the reentrance of the strings would have been even more effective had it been a little softer. But that’s a minor thing; here was a good performance by a host of young people of a brilliant piece of Viennese Classicism, and I would have been happy to hear the whole thing, not just the first movement. 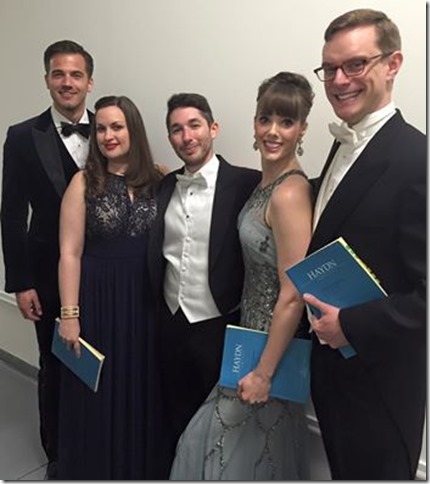 The four soloists in the Lord Nelson Mass, all of excellent caliber, included soprano Meredith Ruduski, mezzo Misty Bermudez, tenor Steven Soph and bass-baritone Douglas Williams. Ruduski, who has to jump into operatic flourishes almost immediately in the opening “Kyrie,” has a high-floating, very pretty and rounded soprano that took the high As and B-flats of the first movement easily, and navigated the virtuosic runs of the movement with accuracy and flair. She has a strong vibrato that adds another edge to a voice that is generally on the lighter lyrical side and well-suited for this music, as she showed in the way she sang the softly falling triplets in the “Et resurrexit.”

Bermudez’s dark mezzo added some beautiful color to the “Benedictus” and the “Agnus Dei,” where in her solo work she demonstrated an admirable smoothness of line and sensitivity. Tenor Soph doesn’t have as much exposed writing in this Mass, but his clear and clarion voice matched well with bass Williams, and when the whole quartet sang, you could hear the depth and potency of all four singers.

Williams was the find of the day, with an absolutely beautiful reading of the “Qui tollis” (which surely inspired the “Tuba mirum” of the Mozart Requiem) that showcased a voice of dark-honey color and substantial presence. This solo covers a wide range of about two octaves, and Williams’s voice had a gratifying evenness that was effective at the very top and bottom as much as in the middle. His phrasing, too, was masterful, and exemplary for Haydn’s late style.

Yet still the most important thing about the concert was the singing of the Master Chorale overall. The Lord Nelson Mass is not easy in any sense of the word; it has a great deal of counterpoint and difficult fugal writing, and it can be tortuous to listen to in amateur performances. But you would be hard-pressed to say that the chorus on stage May 1 was made up of professionals in other fields who sing for the love of it. This Mass must have been presented to them by Karlin as a massive challenge that they would have to meet, because this large group rose to the occasion and rose impressively. 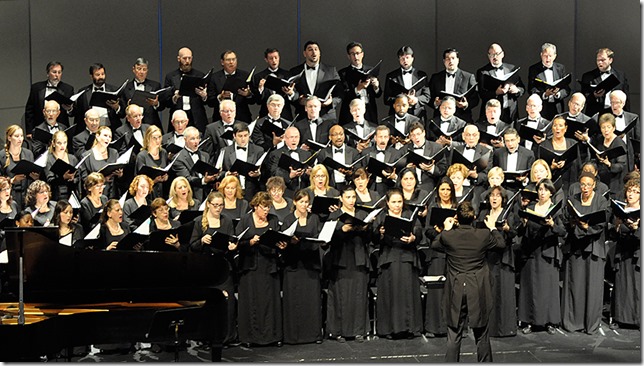 The Master Chorale of South Florida.

It was most evident in passages such as the In gloria Dei Patris of the “Quoniam tu solus sanctis,” which starts with a fugue subject in the basses, imitated by the tenors two bars later. The men sang with virility and confidence, moving right into the music without divulging its difficulty. The counterpoint that follows is knotty and tricky, but the men and women of the Master Chorale brought it off without evident strain. And they did so throughout the piece; at no time did Haydn’s complexities sound like they were beyond the chorus’s abilities.

In past years, the Master Chorale has presented large choral works that didn’t involve the chorus enough, and left the heavy lifting to the soloists. The Lord Nelson Mass is a workout for soloists and chorus, and it was a joy to the chorus singing so much, and working so hard. This was an ideal selection for this group, and Karlin had clearly rehearsed them expertly.

The group has two major works in store for next season: the Bach B minor Mass and Berlioz’s Romeo et Juliette. That’s a tall order by any stretch of the imagination, but the Chorale has the right leader in Karlin, and he has that crucial blend of enthusiasm and discipline that inspires people to do their best work. That was everywhere in evidence at the Wold that Sunday, and it promises an exciting future for this community chorus.

Film: Playwright August Wilson began his chronicle of the African-American experience throughout the … END_OF_DOCUMENT_TOKEN_TO_BE_REPLACED

Film: Just in time with the opening of movie theaters in Palm Beach County comes the season’s most … END_OF_DOCUMENT_TOKEN_TO_BE_REPLACED

Music: The very last concert Franz Joseph Haydn attended in his life was in March 1808, about a year … END_OF_DOCUMENT_TOKEN_TO_BE_REPLACED