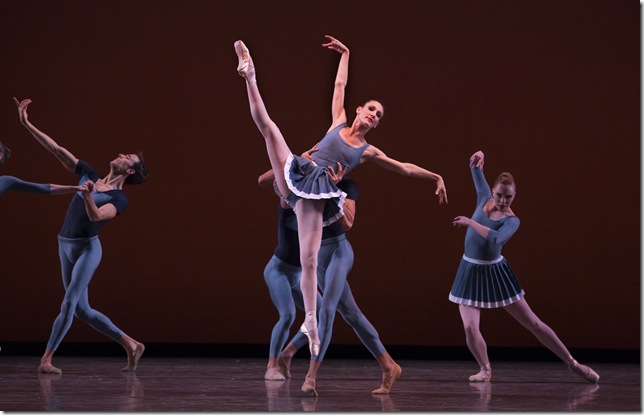 Tricia Albertson and Miami City Ballet dancers in Year of the Rabbit. (Photo by Daniel Azoulay)

Miami City Ballet gave yet another sparkling performance Saturday afternoon at the Kravis Center for the Performing Arts. The company was in excellent form — dancing with command — in Program Three, which was an elegant and richly satisfying selection of works by George Balanchine, Paul Taylor and the new darling of the ballet world, Justin Peck.

Starting off with verve was MCB’s premiere of Year of the Rabbit. The lively, 30-minute work, which is performed in seven sections named after the animal cycles of the Chinese Zodiac, was choreographed by Peck when he was 25 and in the corps de ballet of New York City Ballet.

Last season, MCB presented Heatscape, the vibrant and skillfully crafted work Peck created especially for the company. Now not only a soloist but also resident choreographer at NYCB (this prestigious title has only been held by one other person), Peck certainly deserves the praise that is being bestowed on him at the ripe old age of 28.

Drawing inspiration from the wonderfully playful music of Sufjan Stevens (Enjoy your Rabbit), as orchestrated by Michael P. Atkinson, Peck created a spunky but substantial work.

Peck’s skillful ensemble patterns, distinctive partnering and inventive use of the corps de ballet to frame the soloists made for a rich, cohesive and clean work which was further enhanced by the strong use of color like tangerine on lit backdrop and royal blue on the perky costumes. I especially liked the way the women’s short pleated skirts with their white stripes flipped as they moved. Peck designed the costumes himself.

Miami City Ballet dancers in Year of the Rabbit. (Photo by Gene Schiavone)

At Saturday’s matinee, there were three replacements in the cast of The Year of the Rabbit and these three dancers were standouts in the work. Michael Sean Breeden was cool and light in his solo which showed his articulate footwork. His easy clarity and clean attack in his phrasing of the movement was beautiful to watch.

Zoe Zien and Jovani Furlan were stunning both individually throughout the dance and together in their dark duet “Year of Our Lord.”

Emily Bromberg and Renato Penteado were also quite wonderful in the interesting section “Year of the Tiger,” with its inventive use of the dancers to abstractly create a cage for each of them. It made one want to read up on the different meanings of Chinese Zodiac animals.

Peck, who is a self-taught choreographer, spent all his free time when he was a student at the School of American Ballet studying all the performances of the Balanchine and Robbins works. Since he has been both a corps member and a soloist at NYCB, Peck has had the opportunity to dance many roles in these iconic works and he feels that this has given him the advantage to further hone his craft by “learning from the inside out.”

The central work on the program was Sunset, by the renowned modern dance choreographer Paul Taylor. It was a delicate but moving work that is also new to MCB’s repertory this season. Created in 1983, Sunset had a traditional look with the exception of the stylized stage décor by Alex Katz. A pale blue wall was set at an angle to the back of the stage and had a sparse selection of long black marks that look like something has been uprooted and was blowing away. It was anchored by a set of metal railings that suggested the edge of a park.

Six young soldiers dressed in khaki and red berets intermingled with four young women in white summer dresses. They filled the stage with trademark Taylor movement while they danced to the Serenade for Strings and Elegy for Strings by English composer Edward Elgar, which were distinctly separated with the sound of the lonely call of loons.

There was a bittersweet quality to the pairings of the soldiers and women as it became clear that inevitable separation, whether temporary or permanent, was just a matter of time. Even when the mood was lighthearted, there was a sense that war with its destruction and death was always hanging in the air and would most certainly touch this group, even though now war was far away from the intimacy of this park.

The resounding close to the afternoon’s performance was Bourrée Fantasque, one of the first works Balanchine created for the newly formed New York City Ballet in 1949. 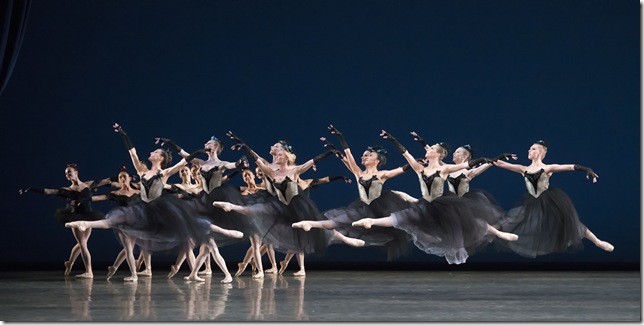 Bourrée Fantasque had three movements — each with its own cast dressed in different Karinska costumes that hinted at La Belle Époque — which were followed by a rousing finale with all 42 dancers onstage. With lushly draped, blue velvet side curtains, there was a tinge of circus-meets-Folies Bergère complete with fans, feathers and velvet corsets worn with long gloves and lively horn sections in the fun and melodious music of French composer Emmanuel Chabrier. Unabashedly romantic and chocked full of wonderful Balanchine steps and patterns — all of which was beautifully danced — Bourrée Fantasque was quite fantastique.

Breeden returned to partner the elegant and always engaging Callie Manning in the cast of the 1st Movement. A rather somber-faced Simone Messmer was the lead in the romantic 2nd Movement. She was partnered by Reyneris Reyes and accompanied by a corps of eight women dressed in long black tulle tutus. Jennifer Lauren and Renan Cerdeiro led their cast with aplomb to the oom-pah-pah rhythm of the 3rd Movement.

The sheer number of 42 dancers coming together for the grand finale dressed in three different sets of the great Karinska’s costumes and perfectly executing Balanchine’s intricate lines and formations to the spirited music of Chabrier was a thoroughly enjoyable dose of “classy kitsch” by Mr. B.

Film: Just in time with the opening of movie theaters in Palm Beach County comes the season’s most … END_OF_DOCUMENT_TOKEN_TO_BE_REPLACED

Music: The very last concert Franz Joseph Haydn attended in his life was in March 1808, about a year … END_OF_DOCUMENT_TOKEN_TO_BE_REPLACED