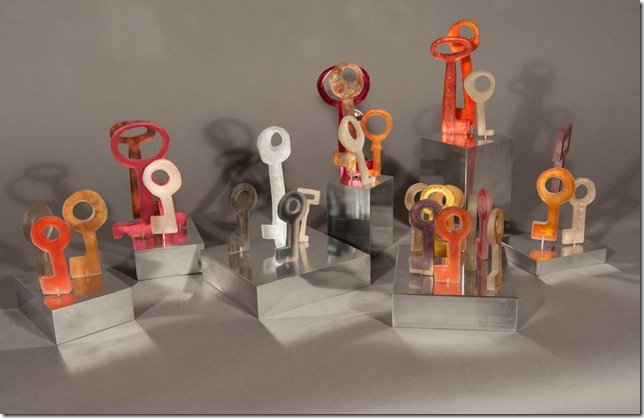 A chameleon can re-grow a lost arm, so why can’t you?

That’s the premise and the promise of regenerative medicine being explored with academic enthusiasm in the Wake Forest University’s Medical School lab in North Carolina by the pioneering surgeon and researcher Dr. Antony Atala. Rhode-Island based artist Kelly Milukas was commissioned to plunge into the mysteries of the gene pool by the Regenerative Medicine Foundation and the result is her work, currently on display at the Palm Beach Photographic Centre until the end of May.

The show, titled Keys to the Cure, is at the nexus of art and science. It’s the result of a yearlong marathon swim by Milukas toward a visual language that could interpret the work of Atala’s lab. The core concept Milukas hit on is the theme of locks and keys because, to her, the premise of regenerative medicine is that we contain both the keys and locks to self-healing.

The show is a mix of photographic images of locks and keys popping up in surprising places, abstractions of lab tools, three-dimensional objects and micro-views that turn human organs into colorful whirls, twirls, squiggles and general weirdness. It’s as if Shakespeare might have conjured up Macbeth as a genomically inclined lab rat: Is this a liver I see before me?

Stem cell research and tissue engineering, both arrows that are part of Atala’s quiver, have scalpeled the path towards understanding the essential concept of regenerative medicine which is as simple as it is daunting: the inner workings of the human organism, like those of the chameleon and the starfish, have the potential to fix themselves by fitting the right bio-key into the right bio-lock.

But just like those car keys — you know darn well where you put them, but you still have to turn the whole house inside out to find them. That’s what Atala and his colleagues have been doing.

The idea that the human organism can add an extra limb or two is not totally new. Just ask one of the multi-limbed Hindu gods or goddess who can presumably perform the impossible engineering feat of scratching the itch on his/her left elbow with one of his/her left hands. But, now the theoretical boundaries of medical science have shoved far beyond ancient humors, Victorian vapors, post-modern aches and pains and sniffles to futuristic bio-manufacturing. The idea is that the inner and integrated workings of genes and cells have the potential for the body to heal itself. The potential to cure, rather than just treat the disease or injury, as Milukas explained to me.

According to Atala, if he can grab a nanopinch of one or two healthy cells in the midst of a junkyard of physical wreckage wrought by life-threatening disease or critical injury (think wounded warriors), it’s indeed possible to re-grow the whole from the part. Synthesize from the feet up, so to speak. It’s as if we each had our own 3-D printer stuffed inside our shells. Patient, heal thyself.

We’re not talking about a big ear on the back of mouse here. Though some of us of a certain age wouldn’t mind an extra texting-dedicated thumb.

Film: Playwright August Wilson began his chronicle of the African-American experience throughout the … END_OF_DOCUMENT_TOKEN_TO_BE_REPLACED

Film: Just in time with the opening of movie theaters in Palm Beach County comes the season’s most … END_OF_DOCUMENT_TOKEN_TO_BE_REPLACED

Music: The very last concert Franz Joseph Haydn attended in his life was in March 1808, about a year … END_OF_DOCUMENT_TOKEN_TO_BE_REPLACED