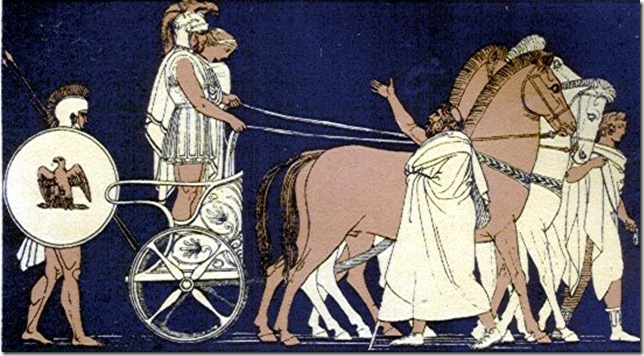 The red carpet has been a trope since the 5th century B.C., when the coy Clytemnestra welcomed home the wings beneath her feet from his travails in Troy. The not-always-humble monarch Agamemnon wisely demurred, according to Aeschylus.

He was nervous about stepping onto the path reserved for the gods. Hey, he might have said, “I am a mortal, a man; I cannot trample upon these tinted splendors without fear thrown in my path.”

Not so the movie gods and goddesses of our time. They have neither such fear nor humility.

But then in that celeb couple’s time, there was no faux-faced Joan Rivers to be the first to poke a microphone in his face and demand to know whose hide he was wearing for the after-party. No one to ask him who did his nose, his lips, his cheekbones or his ears, not to mention his teeth whitener. Not even a mani-cam-equipped shadow box through which to walk his fingers, flaunting his glamorous nail art.

And no “Fashion Police” to carp about it later.

But, remember, as Red Buttons used to say, Christopher Columbus never got a dinner.

Columbus didn’t get the red carpet treatment, either, when he stepped off the Santa Maria into the shallows of San Salvador, expecting to enjoy a nice dish of General Tso’s chicken or sweet and sour pork. But maybe he was thinking about the financial possibilities of 12 years a slave.

Jesus may have jumped out of his Chris-Craft to surf the Sea of Galilee, but no red carpet was rolled out to keep his feet dry. He certainly could not have imagined that the honorific path intended to be trod by gods and heads of state would become such a common appurtenance to celebrity that, like the ads for the Super Bowl, it overshadows the contest itself.

None of those famous folks could have imagined that in the intervening several thousand years, the concept of the crimson path has been woven into the fabric of American capitalism: the rug where business and celebrity, where money and envy meet as warp and weft.

An Oscar win, even a nominations may be worth the millions spent to cop it (if not this year, then the maybe next), not only for movie actors, directors, producers, but also for the work of the minions of stylists, cosmetic surgeons, dentists, jewelers and, of course, the fashion designers on display.

As designer Carmen Marc Valvo reportedly said, “The dollar return of having some celebrity shot in your dress is worth a fortune … That same image can be blasted repeatedly in newspapers and magazines across the country and around the world. That is worth hundreds of thousands of dollars.”

I am not being a grumpy old geezer here. I’ll likely watch the show, though I’ll record True Detective. The thought of a sickly Mr. M competing against his healthy self seems weird. I might also give a thought to wondering how America’s second-biggest TV night will go over in Sevastopol, where Woody Allen is not so well-known.

We are curious about how our own ceremonial celebrities look in on the screens of our cellphones or blown up beyond all proportion on those giant bowling alley-multiplex wrap-arounds. Will they look shorter or taller than we expect; fatter, thinner; drunk or sober; with mom or kids or flavor of the night in tow? And are their heads really so much bigger than their bodies would suggest — media midgets as a friend of mine calls them.

We’ll find out whether they dined on a luxurious leaf of radicchio, a paleo-spinach stem or a grain of quinoa before the show or just threw Spanx to the winds and succumbed to the terrible temptation of licking a Saltine. We’ll find out where they‘re going to rank on the Ulmer Scale of bankability. Who is this year’s Hilary Swank or Renee Zellweger, Tom Hanks or Ryan Something?

All kinds of important inside info that does nothing to improve our lives, or the lives of those in the Czech Republic, where Chuck Norris is still a pretty big name.

This is the real American hustle, a life fully free from the pull of gravity. A life in which we truly do captain our ships.

As old Aeschylus wrote, “Now my beloved, step down from your chariot, and let not your foot, my lord, touch the Earth.”

Film: Playwright August Wilson began his chronicle of the African-American experience throughout the … END_OF_DOCUMENT_TOKEN_TO_BE_REPLACED

Film: Just in time with the opening of movie theaters in Palm Beach County comes the season’s most … END_OF_DOCUMENT_TOKEN_TO_BE_REPLACED

Music: The very last concert Franz Joseph Haydn attended in his life was in March 1808, about a year … END_OF_DOCUMENT_TOKEN_TO_BE_REPLACED