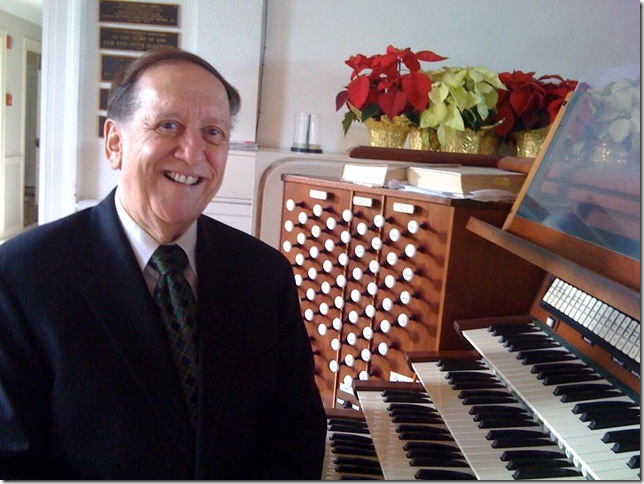 This Sunday afternoon, crowds will gather in force at the Royal Poinciana Chapel on Palm Beach, as they do every holiday season, for a singalong performance of the so-called Christmas portion of George Frideric Handel’s Messiah.

It will be the 32nd such performance since Jack W. Jones inaugurated the local tradition in 1978 at what is now Palm Beach Atlantic University, and it will be the last time Jones will lead his Masterworks Chorus of the Palm Beaches in the oratorio.

Jones, 69, said it’s time for someone else to take over.

“After 31 years, I thought it was time for someone else to have the opportunity and the privilege to conduct the chorus,” he said. “But it’s been a wonderful 31 years.”

Although he will be retiring as Masterworks chief, he’s not stepping down from anything else. He will continue in his full-time position as music director at the chapel, spend more time on his composing, and remain an in-demand accompanist for singers and instrumentalists.

Busy, in other words, even when he’s supposed to be on break.

“This summer, the chapel gave me a three-month sabbatical for my 20 years of service, and I went to my home in North Carolina and wrote a new piano hymnbook — hymn arrangements for the piano,” Jones said. “And then I’m finishing up a book of carol arrangements for the organ. In fact, I’ll be playing them in the next few Sundays for the services.”

Jones is a career church musician, a man who has spent most of his life in service to music and worship in his home state of Florida, and he prefers it that way. A native of Daytona Beach, he first became interested in music while sitting on the edge of a piano bench watching his aunt play.

Before long, he was playing at First Baptist Church services himself, earning the organist’s job when he was only 16. That’s when he discovered his vocation.

“I had played the organ in church on Wednesday nights, and occasionally on Sundays, but the organist, after a new organ had recently been installed, retired. And I became the organist, as a junior in high school,” he said. “So I think that’s when I realized: This is what I want to do for a living.”

That realization was also intimately tied to his Southern Baptist faith.

“It was definitely a leadership of God,” he said. “I felt that He had given me this talent, and I wanted to use it for His glory.”

He continued his studies at Stetson University in DeLand, and then went on to New York, where he earned his master’s in sacred music at Union Theological Seminary and his doctorate at Juilliard. His teachers have included giants of American composition such as Vincent Persichetti and Roger Sessions, and legendary organists of the likes of Anthony Newman and Virgil Fox.

After earning his doctorate, he became director of musical activities at West Point, which had just opened a fine new concert venue in Eisenhower Hall. Jones  left the military academy after three years to return to Florida, primarily for reasons non-natives can appreciate as well.

“It was a wonderful experience,” he said. “But to be quite honest, being a native Floridian, I got tired of those long, gray winters.”

Moving to Palm Beach County in 1976, he founded the town-and-gown Oratorio Chorus at Palm Beach Atlantic, but moved to Southern California two years later for the organist’s job at the First Baptist Church in Van Nuys, which was at the time one of the largest such churches in the country. Jones wasn’t happy out West, though, and remained there only a year.

“I just did not relate to Southern California,” he said. “I guess I had sand in my shoes and I missed Florida, so I came back here.”

Jones founded the Masterworks Chorus the year he returned, in 1979, drawing on the community interest he’d discovered at the Oratorio Chorus.

“I have always loved directing large choruses and doing major choral works. And I had taught university for a number of years and had the opportunity to work with university choirs in doing major works,” said Jones, who lives in Lake Worth. “And I thought it would be a great opportunity for the community to be involved in being able to present the major choral works.”

Over the years, the 70-voice chorus has performed numerous canonical works of the repertoire, and done special events such as a concert featuring Honegger’s oratorio King David, which was presented along with dance and actor interpretations. And for one 13-year stretch, the chorus wrapped its seasons with pops concerts on the south lawn of the Flagler Museum.

The chorus will end its current season April 11 with the Brahms German Requiem, one of the composer’s most cherished and beautiful works. The chorus has sung it before, the first time in memory of organist Fox, who died in Palm Beach in 1980 of prostate cancer.

“The second time was in memory of my dad, who had just passed away. And so this year I’m hoping it will not be in memory of anyone, particularly myself,” Jones said, laughing. “But it is such a glorious work, and I thought: I want to do the Brahms Requiem one more time.”

The chorus will perform the work in English rather than its original German, a choice Jones defends on communicative grounds.

“It is entitled ‘A German Requiem,’ and to be a purist, one should sing it in the original German,” he conceded. “But I feel that the text is so meaningful — ‘How lovely are Thy dwellings’ [for example] — there’s so much encouragement and hope that one can hear in the messages from the text, that this is the reason [we] sing it in English — to communicate that message.”

The board of the Masterworks Chorus has begun evaluating possible successors for Jones, and will announce who that person is before the final concert, Jones said.

“All of the applicants are excellent musicians, and would continue the tradition I’ve established,” he said. “I feel very good about the future of the Masterworks Chorus.”

The Masterworks Chorus of the Palm Beaches will perform Handel’s Messiah beginning at 5 p.m. Sunday at the Royal Poinciana Chapel, Palm Beach. Soloists are soprano Judy Davis, mezzo soprano Dolores Ramsey, tenor Evan Farrar and bass Gordan Longhofer. A pre-performance talk is scheduled for 4:30 p.m., and those who wish to sing along will be accommodated in special pews at the side of the stage. Tickets: $20, $10 for students. Visit www.masterworkschorusofthepalmbeaches.com or call 845-9696 for more information.

Film: Playwright August Wilson began his chronicle of the African-American experience throughout the … END_OF_DOCUMENT_TOKEN_TO_BE_REPLACED

Film: Just in time with the opening of movie theaters in Palm Beach County comes the season’s most … END_OF_DOCUMENT_TOKEN_TO_BE_REPLACED

Music: The very last concert Franz Joseph Haydn attended in his life was in March 1808, about a year … END_OF_DOCUMENT_TOKEN_TO_BE_REPLACED