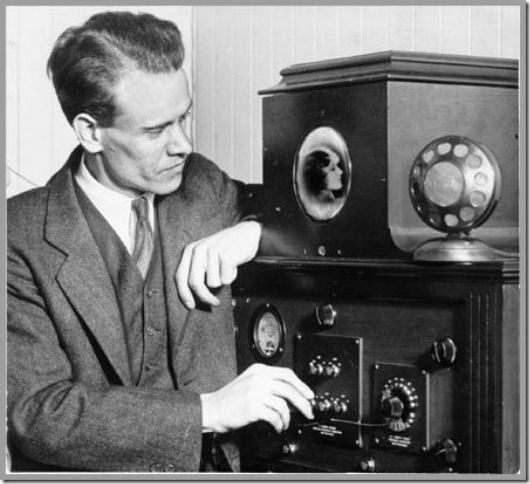 Imagine this: a sea of screens with waves of 70-inch flat TVs breaking on the shore; riptides of wall-mounted Vizios trailing their HDMI cables like the sperm we used to see projected on the roll-up screen in our high school hygiene classes, before the storm surrounding sex education; a beach of upturned satellite TV dishes curling in on themselves in the summer sun like Baudelaire’s fleurs de mal, and millions and millions of miles of unsightly, discarded wires, enough to circumnavigate our rapidly expanding world a thousand times.

No bundelization without representation! That’s our anthem. Our rallying cry. I’m telling you there is revolution in the increasingly thin air above the server farms, a revolution reminiscent of the Sons of Liberty dumping crates of tea into Boston Harbor.

The visionary idea of broadcast television that began with Philo T. Farnsworth transmitting a fuzzy dollar sign, plugged-into-the-wall TV and its line-of-sight satellite cousin intended to hook up the hinterland to a potentially profitable demographic is starting to break up into pixels.

And for the folks of my generation, cutting the cord is the main topic of cocktail party chatter where Netflix is the hors d’oeuvres and black morphs into oranges on a platter. We are wary, anxious about what will become of us if we really do slice through our umbilical cord to the ether. But our knives are out; our scissors are being sharpened.

This business of nation building — Time Warner linking up to Comcast (both among the most hated consumer services) and AT&T swallowing DirecTV (the least reliable providers) — has Balkanized Verizon, T-Mobile and Sprint and left us with few choices.

In fact we, the rentable cherished audience, have been banished beyond the wall to the Kingdom of Roku.

Now the armies of these conglomerates are sneaking up to the front line of their real target: net neutrality. They intend to blow up the bridge and conquer the Internet, plopping a toll road on the information highway while the soldiers of the FCC hide out in their wireless bunkers. Holy Flexpay.

First there was the HOV lane, now comes the fast lane for the nouveau-media rich who can pay a premium for their mostly unwanted contents (1,000 channels of Guy Fieri eating fried anything on the Home Shopping Network) and a slim shoulder for us, the newly downtrodden middle class and the working poor who are soon to be supplanted by artificially intelligent robot burger flippers.

Do you think the newly redesigned Ronald McDonald android is not a sign of the Internet of Things to come?

While Google and Facebook are colonizing clouds with their drones and balloons meant to sign up the untapped consumers of Amazonian pre-contact tribes or endangered refugees, I think of the prescient Benjamin Franklin and his key-flying kite. If he only knew what he had wrought.

Is there anything we can do about it, those of us who naively thought of the Internet first as a library of Alexandrian proportions and now as a public utility like electricity? Precious little.

We are bound to be digested by these commercial Godzillas who are chewing up our homes one by one, like so many Fiat Abarths.

The only thing we can do is cut the cord. But even then, it is very likely that ComTime and ATDirect will have the technology to beam us up at will. After all, we’re worth it.

Rampant capitalism can be dispiriting.

As for us, we’re heading for the barn, a two-car garage in a House of Cards.

Film: Playwright August Wilson began his chronicle of the African-American experience throughout the … END_OF_DOCUMENT_TOKEN_TO_BE_REPLACED

Film: Just in time with the opening of movie theaters in Palm Beach County comes the season’s most … END_OF_DOCUMENT_TOKEN_TO_BE_REPLACED

Music: The very last concert Franz Joseph Haydn attended in his life was in March 1808, about a year … END_OF_DOCUMENT_TOKEN_TO_BE_REPLACED