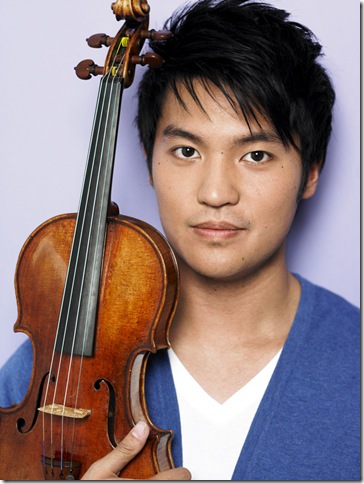 It was a night of rising stars and a visit from some terrific out-of-town guests, and one of the biggest beneficiaries was an underrated great composer.

The Danish National Symphony Orchestra came to Miami’s Knight Concert Hall on Saturday night in the middle of its American tour, bringing the young Australian violinist Ray Chen and the Romanian conductor Cristian Măcelaru along for the ride. Măcelaru was making a hometown return of sorts, having earned his bachelor’s in violin performance at the University of Miami after coming to the United States as a teenager to study at the Interlochen Arts Academy.

For his part, Chen is in the heady stages of a busy career as a showcase violinist with orchestras around the world and as a serious recitalist whose latest release is a disc of Mozart sonatas accompanied by the great conductor and pianist Christoph Eschenbach. Only weeks away from his 26th birthday, Chen is fully involved in the social-media marketing demands of our time, and judging by the young and eager audience members who thronged his CD table at intermission, he’s making inroads into expanding enthusiasm for classical music into the newest generations.

They had good reasons for their excitement: Chen is a dazzling violinist, a player of sparkling technique and presence who gave a vigorous account of the Sibelius Violin Concerto (in D minor, Op. 47) with much of the Finnish fog burnt off. His sound is quite classic (he was a student of Aaron Rosand), with little of the purple shades on the Romantic musical spectrum, and his fingerwork brilliant and mostly accurate.

He and Măcelaru made a most energetic team, reveling in the huge dynamic contrasts from the whispered opening to the big, brass-soaked climaxes that distinguish this popular concerto. But in their fervor there was also something rushed; this was a reading of the concerto that lacked punctuation at key moments, in which the music was given not enough time to breathe to make its full statement and move on to the next.

That said, there were many fine moments throughout, from Chen’s forceful cadenza to his exciting third movement, in which he played the hair-raising leaps and jumps of this manic polonaise with high-wire precision. What this performance could have used was a bit more heavy breathing, a little more old-fashioned rubato and breadth in the line. One can avoid schmaltz yet get close enough to the neighborhood to get a whiff of what’s cooking and bring back some ideas.

The orchestra was splendid throughout, and the concerto drew a big ovation from the modest house. After the third curtain call, Chen wished the crowd a happy Valentine’s Day and then played the Caprice No. 21 (in A, Op. 1, No. 21) of Niccolò Paganini. This is music that’s well-suited to Chen’s style, with its gentle opening in sixths (a love duet, as he noted, marked Amoroso) and its light-hearted scale acrobatics in the second half, and he played it beautifully.

The concert opened with Sibelius’s Valse triste (Op. 44, No. 1), a miniature which for decades was his best-known work, if far less so today. Măcelaru led a very slow version of this, with nothing left of its salon waltz character until the middle strain, when he relaxed things a bit. It was intensely moody and probably not at all what Sibelius had in mind, but it was interesting, and arresting.

The concert’s second half was devoted to a single work, the Symphony No. 4 (The Inextinguishable, Op. 29) of Carl Nielsen, the greatest of all Danish composers. Each of his six symphonies is a masterpiece, and his general absence from the symphonic stage hereabouts is simply criminal.

Written in 1914-16, at the outbreak of World War I, the Nielsen Fourth is an astonishing essay in compositional inventiveness that far outpaces his exact contemporary Sibelius. While younger composers such as Schoenberg, Scriabin and Stravinsky had already moved into the remotest regions of contemporary music at this time, Nielsen’s music is every bit as original, and in much of this symphony he sounds like no one so much as the Shostakovich of the 1940s.

Nielsen has had his champions, Leonard Bernstein and Herbert Blomstedt in the older generations, and Paavo Järvi among the younger cohorts, and after Saturday night’s concert I think it fair to say that Cristian Măcelaru could easily join the ranks. He is a natural Nielsen conductor, alive to the music’s extravagances and changing moods, and keeping at his core an understanding of the composer’s basic bigness and generosity of outlook.

This is music of the heart for the Danes, and they played it superbly, with terrific ensemble from all the sections, and wonderful tympani playing from the dueling drummers in the fourth movement. In the first movement, the strings hammered their first theme with a ferocious energy that augured well for the music to come, while in the second movement, the woodwinds played the lovely theme with a modesty and elegance that contrasted expertly with what had come before.

In the third movement, Măcelaru made much of its stark, forceful profile, leaving all the edges intact and allowing a glorious near-cacophony when each section came in with its own motivic fragments before the sudden rush of thirty-seconds from the violins that leads to the finale. Everything was warm-hearted and expansive in this movement, and Măcelaru built surely and steadily from the opening theme to the ecstatic climax. It was a sensational performance, and Măcelaru seemed to know it; he picked up the score during the second standing-ovation curtain call and held it aloft, beaming.

Although much of the audience had left, those who remained were eager for more, and Măcelaru returned for an encore: more Nielsen, this time his overture to his 1906 opera Maskarade. This, too, was superb, with its flavoring of the 18th century and its swinging, driving central motif, played with endearing muscle by an orchestra that is welcome to return here at any time.

Film: Playwright August Wilson began his chronicle of the African-American experience throughout the … END_OF_DOCUMENT_TOKEN_TO_BE_REPLACED

Film: Just in time with the opening of movie theaters in Palm Beach County comes the season’s most … END_OF_DOCUMENT_TOKEN_TO_BE_REPLACED

Music: The very last concert Franz Joseph Haydn attended in his life was in March 1808, about a year … END_OF_DOCUMENT_TOKEN_TO_BE_REPLACED