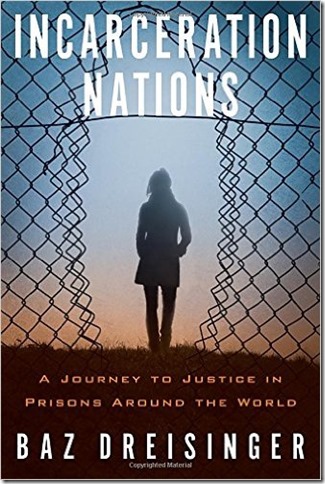 Baz Dreisinger is an associate professor at the John Jay College of Criminal Justice in the City University of New York, where she founded the Prison-to-College Pipeline program.

In this new book, she recounts her travels to nine nations to examine their prison systems and compare them with U.S. incarceration practices.

Dreisinger joins a growing chorus of U.S. leaders who argue that mass incarceration has failed to reduce crime. In fact the recidivism rate is an embarrassing 60 percent.

Singapore, where recidivism is about 20 percent, authorizes the brutal practice of caning, which rips flesh off an inmate’s back. Yet the correctional system includes a job-training program that finds work for 99 percent of inmates leaving prison. Is the message that enlightened policy can coexist with barbaric practices?

In Europe, only a small percentage of convicts go to prison — six percent in Germany and 10 percent in the Netherlands. Instead most convicts are punished by fines, community service, mediation or suspended sentences.

The book stresses the value of education. Those who take college courses in prison pose a dramatically lower risk of recidivism. Dreisinger’s Prison-to-College Pipeline offers college courses for men who have less than five years remaining on their sentences. When they leave prison, they are guaranteed admission to the City University of New York.

Dreisinger cites America’s reputation as “the world’s largest jailer,” with 2.3 million inmates or one-fourth of all inmates worldwide. Consider this scary statistic — 160,000 people are serving life prison terms in the United States compared with 59 in Australia.

The failed war on drugs and the oversold war on crime resulted in massive prison expansion. Between 1990 and 2005, a new prison opened in the United States every 10 days.

Brazil has a program called Rehabilitation Through Reading that takes four days off an inmate’s sentence for each approved work of literature, philosophy or science he reads and then writes about, which sounds like a program American prisons could embrace.

Rwanda is still recovering from the 1993 genocide, when the Hutus slaughtered nearly a million Tutsis. Many of the killers are in prison, where the emphasis is on reconciliation and forgiveness. I wish the author had devoted more text to explaining forgiveness, which is subject to misinterpretation. It does not minimize or excuse crimes. It is directed at the perpetrator and simply means letting go of retribution, hatred, revenge and violence.

In this sweeping overview of prison policy worldwide, Dreisinger criticizes the use of solitary confinement, which can lead to suicide and mental illness. She also condemns the shacking of female inmates giving birth and the widespread U.S. practice of removing newborns from their inmate mothers within a few days of birth.

The author spent several days in each of these nations. She took notes, listened to inmates and correction officials and taught for a few days in some prisons.

No memorable profiles emerge from these pages. I wanted to know more about individual inmates and the actions that led them to prison, as well as the programs that helped them turn around their lives. We do meet inmates in each prison, but the profiles are too brief.

Missing from this book is a helpful conclusion, such as a list of successful programs from other nations that the United States could adopt.

The author has excellent credentials, but the writing is scattered, jumping from subject to subject. Strangely, Dreisinger concludes that Americans “might begin to imagine that the prison era is on the verge of extinction,” but supplies no evidence to support such a wildly optimistic forecast.

Incarceration Nations: A Journey to Justice in Prisons Around the World, by Baz Dreisinger; Other Press, 323 pp., $27.95

Film: Playwright August Wilson began his chronicle of the African-American experience throughout the … END_OF_DOCUMENT_TOKEN_TO_BE_REPLACED

Film: Just in time with the opening of movie theaters in Palm Beach County comes the season’s most … END_OF_DOCUMENT_TOKEN_TO_BE_REPLACED

Music: The very last concert Franz Joseph Haydn attended in his life was in March 1808, about a year … END_OF_DOCUMENT_TOKEN_TO_BE_REPLACED