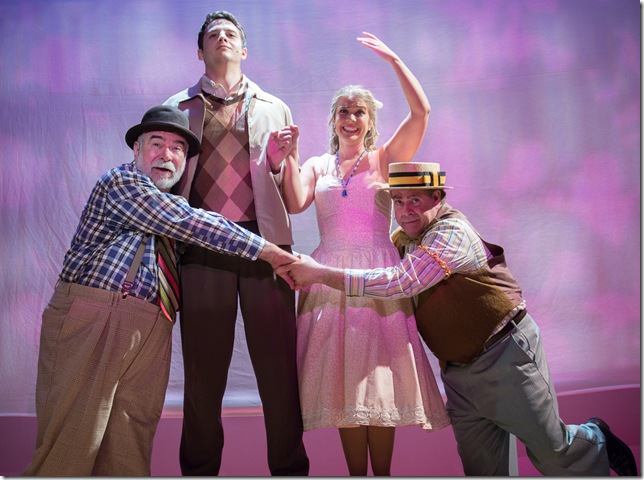 Broward Stage Door Theatre in Margate opens its 2015-2016 season with the musical, The Fantasticks, a touching and tender tale mixed with comic touches and some whimsical characters.

Overall, the show is fun and entertaining, featuring talented players with excellent voices. They seem to revel in the occasional silliness and a scene of mystical reverie that precedes the serious ending. Loosely based on Les Romanesques, written by 19th-century French playwright Edmond Rostand three years before he penned Cyrano de Bergerac, the show smacks of touches from several literary classics.

What the show is best known for isn’t the script or songs, but history. The Fantasticks opened off-Broadway in 1960 and was performed 17,162 times before closing in January 2002, making it the world’s longest-running musical. Long before becoming Detective Lenny Briscoe on Law and Order, the late song-and-dance man Jerry Orbach portrayed the lead character, El Gallo, in the original show.

Steeped in allegory and metaphor, The Fantasticks, penned by lyricist Tom Jones and composer Harvey Schmidt, turns the old Romeo and Juliet tale on its head. Unlike the battling Montagues and Capulets of R&J, two fathers == Hucklebee (Larry Bramble) and Bellomy (Michael Small) entice their children, Matt (Alexander Zenoz) and Luisa (Molly Anne Ross), to fall in love by faking their own feud. They hire traveling actors to abduct Luisa to give Matt a chance to rescue her. But the comically transparent ruse fails and the kids see they’ve been duped.

As day breaks, the potential lovers go their separate ways. The conclusion isn’t easily predictable, nor are the events that take us there.

The abduction scene is a double-edged sword. While it fails, it brings to the fore Henry and Mortimer (Alan Gerstel, Sebastian Lombardo), the hired actors who are both comic foils and comic relief. Gerstel, the former Channel 12 news anchor who’s gone back to his acting roots, is hilarious in ragged manner, ragged clothes and rubber bald pate pasted over a festoon of white hair. Lombardo is sort of the straight man to Gerstel, but is supremely vaudevillian as an Indian and a pirate.

Actually, this show has more layers than a Dagwood sandwich. El Gallo (Pedro Kaawaloa Jr.), a mystical, devilish gent in a Satan-red shirt, opens and closes the show with the musical’s signature song, “Try to Remember.” Its haunting comment, “Without a hurt, the heart is hollow” doesn’t mean much at first, but when the tune comes around again, the message is clear. 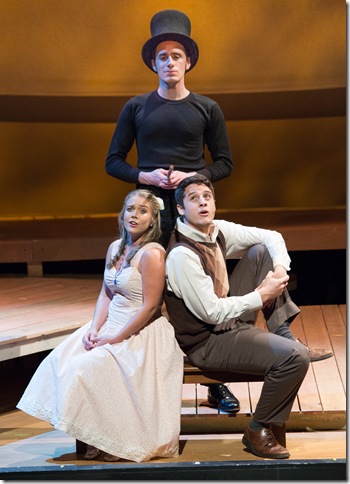 The lack of scenery is part of the production. The wall between the two fathers’ properties is portrayed by an actor, The Mute (Pierre Tannous). The gardens and greenery the dads tend aren’t really there. The moon is painted on a disc hung on a pole. At daybreak, someone turns it over and the sun is on the other side.

This flipover scene is intense. El Gallo observes that what seemed romantic by moonlight may lose its charm when exposed to the harsh light of day. When everyone sings, “This plum is too ripe,” it’s a sign that they are dealing with stark reality. But it doesn’t last long. It goes away, then returns for the critical finale.

The songs do move the action some. Molly sings “Much More,” hoping to see what the world offers. “Plant a Radish” is the fathers’ way of saying that when you raise a child, you don’t know what he or she will be like as an adult. (“Plant a radish, you get a radish…”)

Ross, fresh from her portrayal of Patty Andrews in Sisters of Swing, again displays her strong vocal ability as she duets with Kaawaloa in “Round and Round,” in which she dons a mask to hide the bad things of the world. Zenoz also has a top-notch voice which he displays in songs like the dreamy “They Were You.”

Bramble has already secured his place of distinction on the Broward stage in such plays as The Last Romance, Last Night of Ballyhoo and Twilight of the Golds. He needs no fanfare; he just does it. The same goes for Small, who notches another winner in his 40-year stage career.

Kaawaloa, originally from Hawaii, plays El Gallo with just enough of an edge to justify his satanic persona. His effort to shield Luisa from the bad things in the work makes him seem like the phantom of the opera. But he sings sublimely, giving “Try to Remember” its appropriately tearful tone.

Tannous, who was also in Sisters of Swing and Cabaret, does well as the wall and in his other theatrical chores. Director-choreographer Dan Kelley has a lot on his plate in this multifaceted show, and he works it well. He seems to dice it up into small pieces that can be digested easily.

Accompanying the performers are keyboard master Dave Nagy and Kay Kemper on the harp.

Film: Playwright August Wilson began his chronicle of the African-American experience throughout the … END_OF_DOCUMENT_TOKEN_TO_BE_REPLACED

Film: Just in time with the opening of movie theaters in Palm Beach County comes the season’s most … END_OF_DOCUMENT_TOKEN_TO_BE_REPLACED

Music: The very last concert Franz Joseph Haydn attended in his life was in March 1808, about a year … END_OF_DOCUMENT_TOKEN_TO_BE_REPLACED