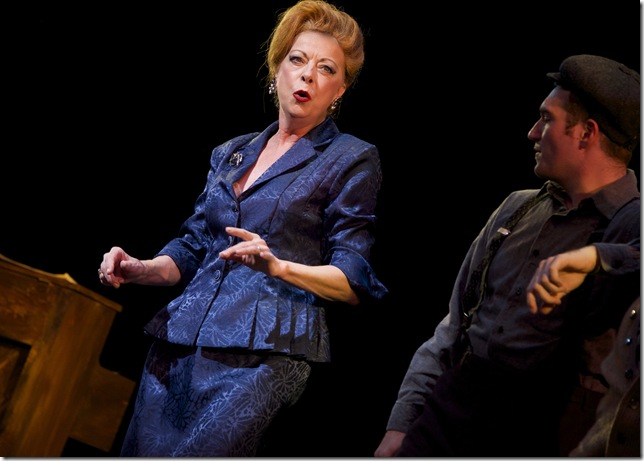 There are multiple murders in the backstage mystery musical Curtains, yet it is one of the most light-hearted shows ever written by the long-running collaboration between composer John Kander and lyricist Fred Ebb. The team that gave us such milestone, dark-toned materials as Cabaret, Chicago and Kiss of the Spider Woman were reaching for a more commercial crowd-pleaser with this 2007 whodunit set inside the Boston tryout of — guess what? — a new musical.

Long in development, Curtains was delayed by the death of its original book writer, Peter Stone (Charade), four years before the show reached New York. And a year after Stone died, Ebb passed away. Rupert Holmes (The Mystery of Edwin Drood) joined on to complete their work, which is — not surprisingly — very uneven.

Boca Raton’s Wick Theatre tends toward more familiar material, but it opted to produce Curtains, gathering a talented cast for it and lavishing considerable resources on the show. Such risk-taking deserves credit, even if the results are less than satisfying.

To put it bluntly, Curtains has a second-rate Kander and Ebb score, though it contains a couple of standout numbers. Reviewers in particular are likely to be amused by a winner titled “What Kind of Man (Would Take a Job Like That),” a tongue-in-cheek tribute to their dubious profession. Even better is the ballad “I Miss the Music,” sung by the composer character about his divorced lyricist partner, but it is also clearly a statement by Kander mourning Ebb. Most of the rest of their musical material is distinctly lackluster.

Curtains opens with a hoedown production number from the show-within-the-show, “Robbin’ Hood of the Old West.” It features The Wick’s museum curator Kimberly Wick, amusingly inept as the star who is quickly murdered, to the regret of no one in the cast. Her demise is soon followed by the arrival of stagestruck homicide detective Frank Cioffi, almost as eager to help fix the show on its way to Broadway as he is to solve the murder.

To Cioffi, everyone in the company is a suspect, from the star’s understudy to the crude-mouthed, penny-pinching producer to the show’s creative team to the slash-and-burn Boston Globe reviewer. Stone (and Holmes) were having fun creating characters based on real-life theater figures, but their time might have been better spent hatching a better mystery plot. We do get glimpses of Robbin’ Hood, both in rehearsal and performance, usually mid-production number with energetic dances by choreographer Bryan Knowlton.

Director Clayton Phillips, making his Wick debut, is fortunate to have the services of Tony Edgerton as Lt. Cioffi, who sings with authority and is an audience empathy magnet. Angie Radosh is a standout as brassy producer Carmen Bernstein and Kevin Healey knows how to deliver a withering punchline as Robbin’ Hood’s director Christopher Belling. Michael Ursua and Julie Kleiner are accomplished singers who hook us in emotionally to the romantic plight of the show’s songwriters.

Ursua also accompanies the rehearsal scenes on piano, a distinct contrast to the pre-recorded music for the rest of the show. Why, oh why, does The Wick continue to produce large-cast musicals with lots of sets and costumes, then mar the overall effect with canned accompaniment?

Film: Playwright August Wilson began his chronicle of the African-American experience throughout the … END_OF_DOCUMENT_TOKEN_TO_BE_REPLACED

Film: Just in time with the opening of movie theaters in Palm Beach County comes the season’s most … END_OF_DOCUMENT_TOKEN_TO_BE_REPLACED

Music: The very last concert Franz Joseph Haydn attended in his life was in March 1808, about a year … END_OF_DOCUMENT_TOKEN_TO_BE_REPLACED