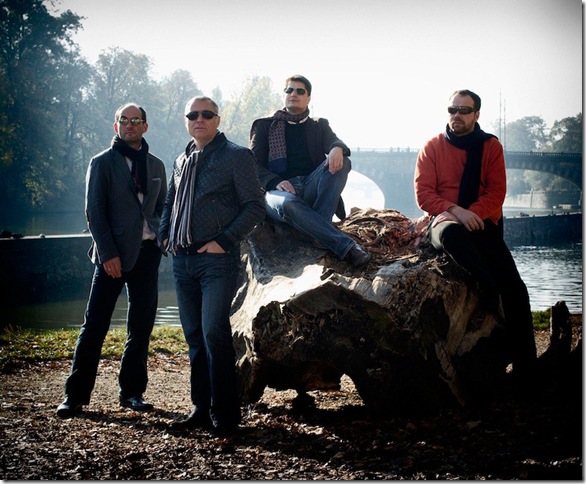 The Flagler Museum Music Series ended its season Tuesday with the world famous Talich Quartet, and it was an evening of glorious music-making.

Named for Vaclav Talich, conductor of the Czech Philharmonic Orchestra for many years, and founded by his nephew, Jan Talich in 1964. His son, also named Jan, now plays lead violin. As one can imagine, there has been considerable turnover of personnel, but the Talich name has always been at the helm.

In 1946, when I was a mere lad of 15, I met a Czech freedom fighter, Mirko Vrana, who with others stormed the Prague Radio station in 1945, taking it from the Nazis. Mirko taught me a few Czech folksongs some of which I recognized in the music played. During the oppressive Soviet domination of Czechoslovakia, Vaclav Talich tirelessly recorded Czech orchestral works infused with folk songs by Dvorak, Smetana and Suk, in order to keep Czech nationalism alive: their music has a definitive Slavonic sound.

The Talich String Quartet has a definitive sound too, which may be compared to bright steel rods in its hard-edged accuracy. They set a high bar to beat with their superb playing. Joaquin Turina’s Oracion del Torero (op. 34) was the warmup that began the evening. It’s about an Andalusian bullfighter’s thoughts before entering the ring.

The players create the sound of rushing wind from which the first violin, Jan Talich, launches into a lovely folk tune. The second violin, Roman Patocka, joins in with a reflective melody, nicely played, inviting the violist, Vladimir Bukac, to share it. Sweet long chords from the cello, Nicholas Tzavaras, anchor this as the first violin returns to the main folk theme.

Joyful harmonic progressions follow from all four players which end the shifting moods. A complacent thoughtful reverie suggests the bullfighter is ready. A series of chromatic downward scales swoop up to end the piece on a confident high note.

Destined to suffer hearing loss in mid career, like Beethoven, Bedrich Smetana wrote lots of lovely music subsequently. The String Quartet No. 1 (in E minor, From My Life), written in 1876, came two years after his deafness. It is a fine composition by the father of Czech music, an acclaim he enjoyed in his very troubled lifetime, having lost three of his four daughters and his young wife to consumption.

He wrote this quartet as a tone picture of his life. An anguished cry from the viola opens the Allegro vivo appassionato. First and second violins pick up this stark theme. Glimpses of Smetana’s untroubled youth shine through. There are hints of Ma Vlast (My Country), his well-known cycle of tone poems, as it flows to the end with two gently plucked strings from the 1st violin and cello.

Next, Allegro moderato a la Polka. A polka it is, as the dancing feet of the four instrumentalists attested. Smetana liked to dance, and here he gives the viola the lead tune. A key change leads to a waltz-like melody on the cello and viola. The magnificent playing is repeated. Smetana was obviously happy in his youth.

Third, the Largo sostenuto, recalls his love for his wife. A lovely cello solo opens, then the solo violin holds the melody: a yearning, ever climbing theme arises. Excellent playing from all here as they negotiate a double forte passage through to a quiet double pianissimo. A heart-rending tune comes from the first violin accompanied by plucked cello. It is a love song passed around to second violin, viola and cello in turn, so sensitively played by everyone as it ends peacefully.

All heads go down as the players hit the lively downbeat that begins the last movement, Vivace. Fast playing from the two violinists means exciting stuff is ahead. Smetana dares to include the high E that constantly rang in his ear leading to his deafness. Lots of folk elements appear, rays of hope for a cure, sadness takes over in the music’s last few bars as things seem to drift to a three-note plucked ending. Standing acclaim met the quartet, who took three well-deserved bows.

After the Smetana, the earlier Dvořák Quartet No. 10 (in E-flat major, Op. 51, Slavonic), was a disappointment. For five years he played the viola in the Prague National Theatre. He was 37 when he composed this piece and had not yet found the world reputation he was to win once he conducted his music in Europe and headed the American Conservatory of Music in New York from 1892 to 1895.

Two violins open with a charming tune; a polka-like melody follows. It is very pedestrian music as the composer works through each theme of the Allegro ma non troppo getting to the repeats. It is ordinary music in its forced sugary sweetness. The Dumka, next, has the cello strumming , guitar like, as the two violins chase around the tune. The lovely crescendos they play are sophisticated, but move to a predictable repeat. Light tripping tunes take the forefront with frequently shifting accents.

Third, the Romanza, is a more solid careful nocturnal lyric piece. The light and shade of the instrumentalists runs off like melting butter: soft, creamy and delicious to hear. Mournful as it progresses. I found very little in this slow unattractive movement that stimulated me. An outburst from the four players breaks the boredom, but it’s too late. Already I’m thinking: Why did they choose this? Surely Dvořák’s American Quartet would have been a better choice?

The last movement is a skocna, a fast folk dance. A few meditative ideas intervene, then it’s back to the skocna. A brilliantly played fugue ends the  piece.

For an encore, after four recalls, Talich, announced they would play — you guessed it — the finale of Dvořák’s American Quartet. All is forgiven. It was brilliantly played, with gusto.

Film: Playwright August Wilson began his chronicle of the African-American experience throughout the … END_OF_DOCUMENT_TOKEN_TO_BE_REPLACED

Film: Just in time with the opening of movie theaters in Palm Beach County comes the season’s most … END_OF_DOCUMENT_TOKEN_TO_BE_REPLACED

Music: The very last concert Franz Joseph Haydn attended in his life was in March 1808, about a year … END_OF_DOCUMENT_TOKEN_TO_BE_REPLACED