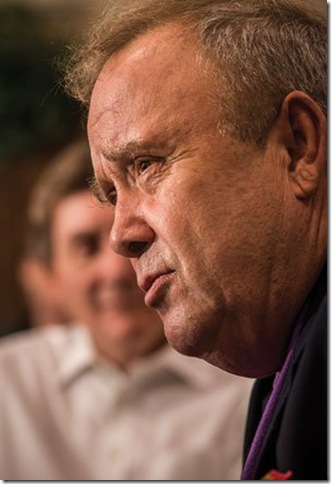 T. D. Allman, a raconteur of rare qualities, begins a telephone interview with a story about his dad. An officer in the Coast Guard sailing patrols out of Tampa during World War II, Allman’s father captured an Italian tanker on its way north from Venezuela.

“Of course, the Italians were delighted to surrender,” Allman says. “He let them keep their sidearms, but he took the chef as his personal prisoner.”

All this is by way of explaining that while he was born in Tampa, Allman, like his father, is at best “an accidental Floridian.”

Yet in this early contact with Florida may be found the germ of two of the fiercest and most prescient nonfiction books written about the Sunshine State in the past 40 years.

Miami: City of the Future (1987), a work of serious reporting and fevered prose, corrected the widespread interpretation of Miami as a “paradise lost, not part of America anymore.” Time has borne out Allman’s view of Miami as the prototypical modern American city.

“From pariah to paradigm,” Allman now says of Miami. “Now there are more Hispanics in Kansas than there were in Miami when I first wrote about it.”

If anything, Allman’s most recent book, Finding Florida: The True History of the Sunshine State is more ferocious still. Longlisted for last year’s National Book Award, it took Allman ten years to research and write. 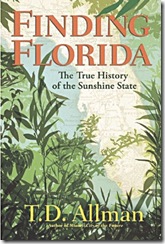 Almost all of what has been accepted as Florida history, according to Allman, is in fact boosterism and propaganda, intended to promote the interests of rich and powerful men who profited from slavery, racism, and the despoliation of nature.

“Finding Florida is not revisionist history,” Allman says. “The fake history is what’s revisionist. The only antidote to mythology and lies is the truth.”

Some highlights: Florida was not purchased from Spain, but stolen. Ponce De Leon was not an old man searching for the Fountain of Youth. Almost all of the great figures of Florida history – Andrew Jackson, Julia Tuttle, Henry Flagler, Napoleon Broward – were scoundrels and worse.

“People get angry at me,” Allman says. “One man said, ‘You are disrespecting the Fountain of Youth.’ If Ponce had found it, he would have been turned over the Spanish Inquisition.”

Never one to shy from controversy, Allman recalls his boyhood in Tampa, before his family moved north when he was 8. “I remember the ‘colored-only’ water fountains at Publix,” Allman says. “I would drink out of them just to prove they couldn’t boss me around.”

And it was outrage that led him, at age 7, to conceive the idea of becoming a writer. He remembers getting off a school bus, lunch pail and book bag in hand, fuming at the stupidity of Dick and Jane.

“I said to myself, ‘I can write better books than this,’” Allman says. “Not only could I write a better book, but correct the paradigm of ‘Dick and Jane,’ all blond, blue-eyed suburbanites with a little dog named Spot.”

Allman made his career at 23 when he exposed the CIA secret war in Laos. “I got the secrets in Cambodia by listening to the market women in the morning, the rickshaw boys,” he says. “You have to go into the streets and trust people. Most reporters seldom leave their hotels.”

As a busy and respected foreign correspondent, he contributed to The New Yorker, The New York Times, Esquire, The New Republic, Rolling Stone, among many other magazines. His specialty: Debunking received wisdom.

“The one thing I’ve left out of this triumphalist version of my life is how hard it is,” Allman says. “You have to rewrite everything 75 times.” 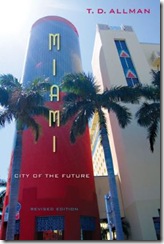 Florida first came to Allman’s attention in 1980, the year of the Mariel Boatlift, and the Arthur McDuffie race riots, when Overtown in Miami burned after four policemen were exonerated for beating a black motorcyclist to death.

“Esquire sent me,” he says. “I thought, what could be more American than race riots, drugs, immigrants being smuggled in?”

Allman says his vision of Miami as “the city of the future” has not only been borne out, it now extends to the entire state. “I said what happens in Miami happens somewhere else sooner rather than later,” Allman says. “’City of the Future’ is not a compliment but a statement of fact.”

Today, Allan calls Florida “the truth-teller state.” The idea of Florida as a paradise is passing away. Here old problems and new ones mingle like alligators and pythons in the Everglades.

“In 2000 Florida told us that the Electoral College is a holdover from the over-enfranchisement of slaveholders,” Allman says. “Now, in an age when large sections of the earth are being undone by man’s folly, Florida is prime for the ravages of global warming.”

Allman says the glass-bottom boats, so long a symbol of Florida tourism, are disappearing. Rising seawater is pushing back on the vast freshwater aquifers and muddying the waters of north Florida’s famous springs.

Surprisingly, Allman is not pessimistic. People will adapt, he says, and predicts “immigration will save us.” All we need is a strong federal government and constitution “to protect our liberties. We cannot leave our basic liberties to local government.”

What’s more, Allman praises Miami as “cool,” and Fort Lauderdale as forward-looking. And there are “some very nice people” in Palm Beach Gardens.

“Fort Lauderdale has done something very difficult,” he says. “In the past 30 years it has transformed itself from a scruffy Spring Break spot to the glamorous yachting capital of the world.”

T.D. Allman, along with many other authors, will be at Literary Feast 2014, a weekend-long celebration to benefit the Broward Library Foundation. The Night of Literary Feasts, a cocktail party followed by dinners with individual authors, begins at 6 p.m. Saturday, March 15, at the Marriott Harbor Beach Hotel in Fort Lauderdale. Tickets are $175.

The next day, Sunday March 16, the same slate of writers will appear at LitLive!, a series of free lectures and panel discussions at the Alvin Sherman Library at the Davie Campus of Nova Southeastern University. From 11:30 a.m. to 5:30 p.m.

Film: Playwright August Wilson began his chronicle of the African-American experience throughout the … END_OF_DOCUMENT_TOKEN_TO_BE_REPLACED

Film: Just in time with the opening of movie theaters in Palm Beach County comes the season’s most … END_OF_DOCUMENT_TOKEN_TO_BE_REPLACED

Music: The very last concert Franz Joseph Haydn attended in his life was in March 1808, about a year … END_OF_DOCUMENT_TOKEN_TO_BE_REPLACED