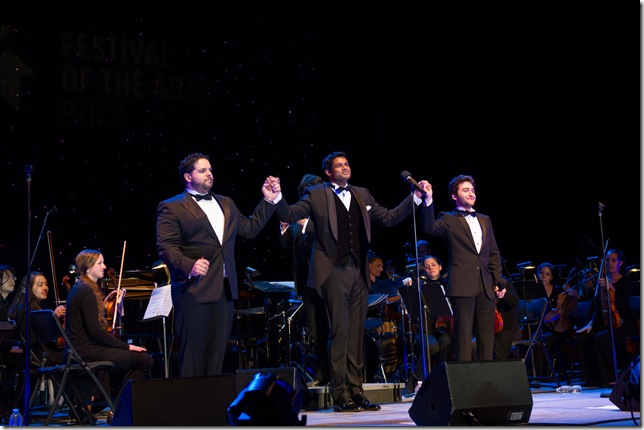 Not since Hurricanes Frances, Jeanne and Wilma has a trio of any kind hit Boca Raton with the impact of Forte, the power-voiced operatic tenors whose nearly two-hour show Saturday night wrapped up the eighth annual Festival of the Arts Boca on a high and mighty note.

The men with stellar, soaring voices played to four standing ovations and performed two encores — and could have done more if the audience of nearly 2,000 had its way.

Looking back, it’s hard to believe that this group finished fourth in last summer’s America’s Got Talent competition, beaten by a robotic movement artist from Japan, a nasally comedian and a country singer. “People told us we got robbed,” group member Fernando Varela joked to the gallery as the tenors pieced together the backstory of Forte between songs at the Mizner Park Amphitheater. He went on to say that the appearance on AGT “opened many doors” for them.

The tenors got exceptional backing at Saturday night’s show from the Henry Mancini Institute Orchestra conducted by Constantine Kitsopoulos, music director for Festival of the Arts Boca.

Forte’s musical agenda on the Mizner Stage ran the gamut from the Beatles to Bocelli and Celine Dion. They opened with a couple of audience favorites, Pie Jesu (from Andrew Lloyd Webber’s Requiem), and Leonard Cohen’s Hallelujah. They blew away Simon and Garfunkel’s Bridge Over Troubled Water and came flying back with an Italian version of Unchained Melody that was met with roaring applause.

They raised the Titanic with My Heart Will Go On, also sung in Italian, and brought back the Fab Four with their own special take on George Harrison’s Something. 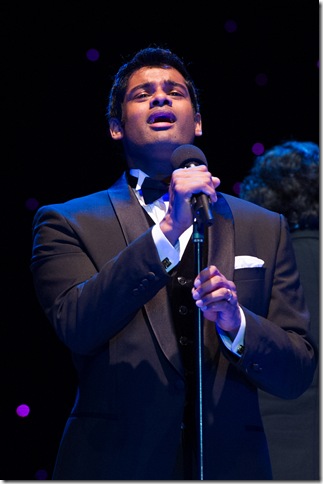 Each Forte member came to the stage to display his individual talent. Sean Pannikar performed a robust version of Dein ist mein ganzes Herz, an aria from Lehar’s operetta The Land of Smiles, while Varela, a longtime Floridian born in Puerto Rico, sang the Spanish folksong Granada. And New Yorker Josh Page broke out with a tune new to Forte, Go the Distance from Alan Menken and David Zippel’s score for the Disney cartoon Hercules.

The trio stayed on its intense vocal roll with the David Foster-Carole Bayer Sager tune, The Prayer; combined for a touching tribute to iconic Italian tenor Enrico Caruso called, simply, Caruso, and performed a crowd-hushing version of Somewhere, from Leonard Bernstein’s West Side Story.

Clearly, the gallery did now want these guys to leave the stage. After receiving a roaring standing ovation, the trio walked off, but came back out and performed Puccini’s Nessun dorma. They again exited stage right, but returned when the thunderous applause refused to die down. After receiving bouquets of flowers, they sang the Andrea Bocelli-Sarah Brightman song, Time to Say Goodbye.

The singers were back on the stage one more time and then said goodbye. But Page stayed long enough to get a selfie photo of the group with the audience in the background – his second of the night.

Though they got their big boost from America’s Got Talent, the singers actually have fairly substantial resumes. Panikkar, who joined Forte in mid-summer 2013, was already an established opera singer before Page and Varela called. In addition, Varela had already racked up a decade of experience singing opera before joining Forte, including work in the Young Artists program at Palm Beach Opera. Coincidentally, both he and Panikkar have played Rodolfo in La Boheme, but for different opera companies.

Page, as well as Varela, has musical links to David Foster and has sung with American Idol alums Ruben Studdard and Katharine McPhee as well as Jackie Evancho and Josh Groban.

Film: Just in time with the opening of movie theaters in Palm Beach County comes the season’s most … END_OF_DOCUMENT_TOKEN_TO_BE_REPLACED

Music: The very last concert Franz Joseph Haydn attended in his life was in March 1808, about a year … END_OF_DOCUMENT_TOKEN_TO_BE_REPLACED