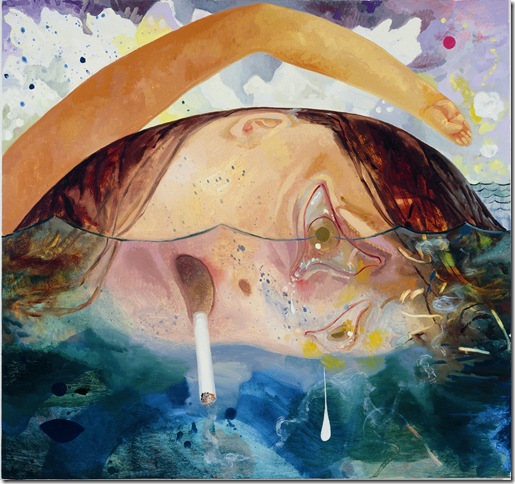 If ever it could be said of a person that she lives in her own imaginary world, American painter Dana Schutz would be that person.

A 10-year survey of her work, Dana Schutz: If the Face Had Wheels, is currently on view at the Miami Art Museum until Feb. 26. The exhibit contains 30 paintings and 12 drawings. At first glance, the work seems colorful, cheerful even. However, closer inspection reveals that Schutz’s imaginative world is riddled with sinister undertones.

Of course, imagination is expected from artists, but while all artists capture moments, not all create environments within their work that are layered with nuance, and rich with deeper meaning, in the manner in which Shutz does.

In bringing her inner world to fruition, her work is concerned with a realm beyond the mundane, yet triggered by exactly that. In Schutz’s world, friendly colors — those that are often associated with the illustrations one would see in a children’s book — often accompany macabre subject matter.

In the show’s accompanying catalog, Helaine Posner, chief curator and deputy director for curatorial affairs at the Neuberger Museum of Art in Purchase, N.Y., where the show originated, writes, “Schutz’s commentary on contemporary life is both bizarre and prescient. She combines traditional techniques with innovative, at times, provocative content to create idiosyncratic paintings for an anxious age.” 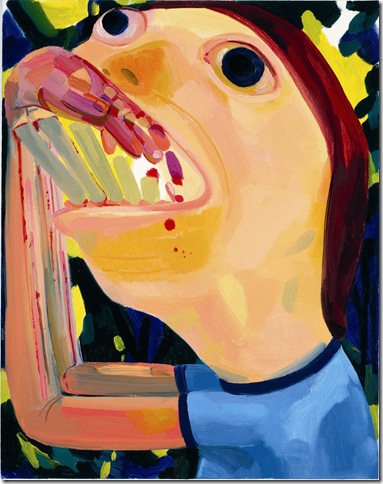 “Bizarre” is certainly an apt description for many of Schutz’s paintings and drawings, particularly evident in two of her works from 2004, Face Eater and Devourer, where the subject is consuming itself.

In an essay, also in the catalog, critic Cary Levine attributes Schutz’s imaginative world to her white, middle-class upbringing during a prosperous era that has now suddenly found itself amidst chaos, with her work representative of the ensuing anxiety of the era in which we live now. With this in mind, her work becomes commentary, part of a generational dialogue, with social ramifications.

Levine writes: “[Schutz’s] subjects — broken bodies, desolate landscapes, one figures, bizarre rituals, impossible beings that devour themselves — are thoroughly of our time and place. With their combinations of dystopia and utopia, chaos and dispassion, horror and humor, Schutz’s grotesque paintings embody a culture confronted with apocalypse, but which remains confused, under-inspired, and without a clear path forward…” 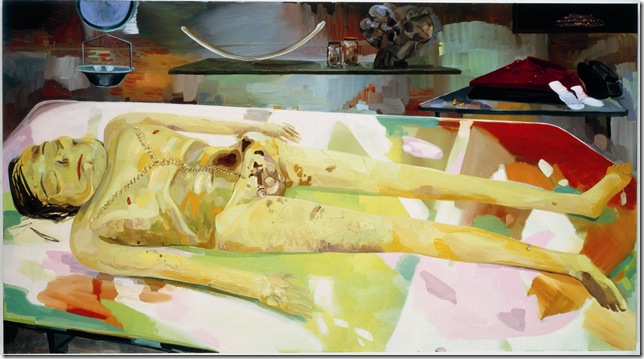 In one work, which takes “life-imitates-art” to an entirely new level, she tackles the bizarre in relation to pop icon Michael Jackson, a man representative of the many excesses of an angst-ridden world: plastic surgery, drug addiction, exploitation and vulnerability. But the work was done in 2005. Jackson died in 2009, so it becomes eerily prescient.

“The initial thought when making the painting was that he is a speculative subject — that he could be in any form, and there’s no telling how he was going to look when he died,” Schutz has remarked about the work.

Within If the Face Had Wheels, Schutz’s work is grouped into a few different series, the most recent of which, completed in 2009, deals with three disparate activities being done simultaneously. So in one you have Shaking, Cooking, Peeing and in another Swimming, Smoking, Crying.

The latter depicts a woman doing those three things and Schutz has this to say about it: “The painting felt so much about interiority, breathing, and desperation. I used to be on the swim team in high school, and you’re really in your own head as you swim in the lane. I wanted the head to be like an island and the face to be like the underside of a boat, with things going on beneath it.” 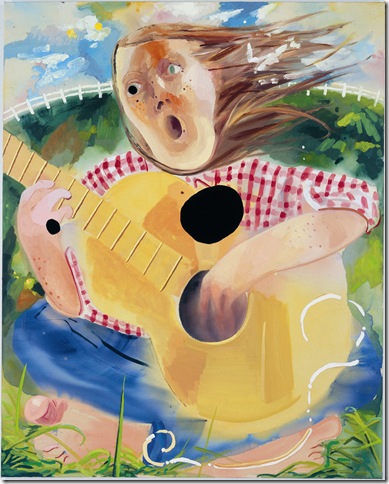 Schutz has accomplished much for a young artist. She is only 35. She has garnered accolades for this exhibit. In 2011, she received the Roy R. Neuberger Prize, awarded every two years to an artist for an early career survey. In November, this exhibit was featured on the cover of Art in America.

Her artistic voice, manifested visually, emanates from an inner world shaped by the events and culture that surrounded her, and, apparently, there is much for her to say.

Jenifer Mangione Vogt is an art and culture writer. Visit her blog at http://www.fineartnotebook.com

Dana Schutz: If the Face Had Wheels is on view at the Miami Art Museum until Feb. 26. Hours for this exhibition are Tuesday through Friday from 10 a.m. until 5 p.m., and Saturday and Sunday from 12 p.m. until 5 p.m. Admission is $8 for adults, $4 for seniors, and free for students and children under 12. For more information, call 305-375-3000, or visit www.miamiartmuseum.org.

Film: Just in time with the opening of movie theaters in Palm Beach County comes the season’s most … END_OF_DOCUMENT_TOKEN_TO_BE_REPLACED

Music: The very last concert Franz Joseph Haydn attended in his life was in March 1808, about a year … END_OF_DOCUMENT_TOKEN_TO_BE_REPLACED