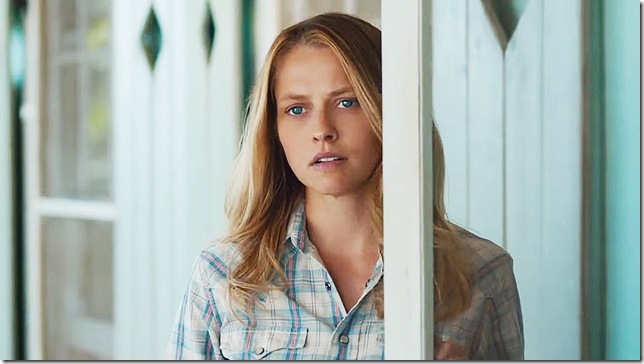 Ross Katz’s adaptation of Nicholas Sparks’ The Choice opens with a bold, un-back-up-able statement: “I’m about to tell you the secret of life,” delivered in voice-over by a mournful man who shows up at a hospital with flowers for his beloved.

He shares some vaguely cryptic, archly ponderous dialogue with a doctor, words delivered solely for the audience’s benefit. The brief exchange is interspersed with the man’s ongoing voice-over, a pop-philosophy treatise on free will and the choices we make, designed to render the Seventeen readership agog with its profundity.

But it’s all just a tease: No sooner do we establish our bearings in this artificial construct that we’re thrust into an equally ersatz one, seven years earlier, in which shiny happy people frolic on powerboats and in beachside taverns. Every character under 35 looks like he or she just stepped out of the model shop, maintaining impossibly fit bodies while subsisting on barbecued steak and red wine.

Folks, this is going to be a long movie.

The Choice is presented, mostly, from the perspective of the flower carrier and speedboat captain, a happy-go-lucky Southern-accented good ol’ boy named Travis Parker (Benjamin Walker, exuding the inchoate rakishness of a young McConaughey). He works as a veterinarian at the small-town animal clinic run by his father (Tom Wilkinson, collecting a paycheck) and enjoys a commitment-free life with an on-again, off-again girlfriend (Alexanda Daddario).

But his carefully maintained Jimmy Buffett lifestyle is about to be disrupted by his new next-door neighbor — a med student named Gabby (Teresa Palmer) who has the gall to demand Travis turn his music down: In their meet-cute, she’s trying to study, but his frat-rock is drowning out her Goldberg Variations (look how different these people are!).

From here, it’s a matter of sauntering sassily toward smitten gazes and inexorable, clear-the-kitchen-table-with-one-passionate-swipe coitus, with minor hiccups to overcome along the way: Namely Gabby’s doctor boyfriend (Tom Welling), a bland, square gentleman conveniently dispatched to a three-week medical conference, plenty of time for his girlfriend to stray, and stray hard. Palmer and Walker are not Claudette Colbert and Cary Grant by the stretch of anybody’s imagination, but their attraction is palpable and their chemistry is strong. Their interactions have a cute snap to them, suggesting at least the better moments of a ’90s WB romance.

But the plaudits end there, because no matter how committed, the actors cannot overcome such a shallow, stultifying screenplay. Gabby is stripped of all intellectual distinction the moment she caves into Travis’ charms, crumbling to mush and seeming to jettison the doctoral track she’d been pursuing with gusto. Henceforth, every conversation is about The Man. The Choice fails the Bechdel Test proudly and spectacularly.

Director Katz shot the movie around North Carolina, and it too is bleached of distinction in favor of Anytown anonymity. Postcard-pretty montages of coastal sunsets and dockside revelries with dogs, families and beer coolers look like outtakes from pharmaceutical commercials; as Travis and Gabby get to know one another, you half expect a voice-over warning of restless legs and bleeding pustules, should Zyprexa be right for you.

All the while, we’re awaiting tragedy to strike, and it does, of course, in that familiar, multi-hanky Nicholas Sparks shamelessness that warms cockles just in time for Valentine’s Day. Every action, and practically every shot, from this point on festers with leaden, quasi-literary symbolism, from an empty boat to a hurricane to a wind chime recovered from the debris to a gazebo Travis builds on the beach. Each of these is a sign, infused with mystical mumbo-jumbo — bordering, if not sliding fully, into Sparksian self-parody.

I’m not so deluded that I believe any of this criticism matters to the movie’s box office returns. The Choice is bound to be lambasted by the intelligentsia and embraced just as fervently by a mass of moviegoers eager for a good cry. If this review convinces just a handful of potential ticket-buyers to heed the movie’s advice and exercise enough autonomy to select a different choice at the cinema, it’s done its job.

Film: Playwright August Wilson began his chronicle of the African-American experience throughout the … END_OF_DOCUMENT_TOKEN_TO_BE_REPLACED

Film: Just in time with the opening of movie theaters in Palm Beach County comes the season’s most … END_OF_DOCUMENT_TOKEN_TO_BE_REPLACED

Music: The very last concert Franz Joseph Haydn attended in his life was in March 1808, about a year … END_OF_DOCUMENT_TOKEN_TO_BE_REPLACED