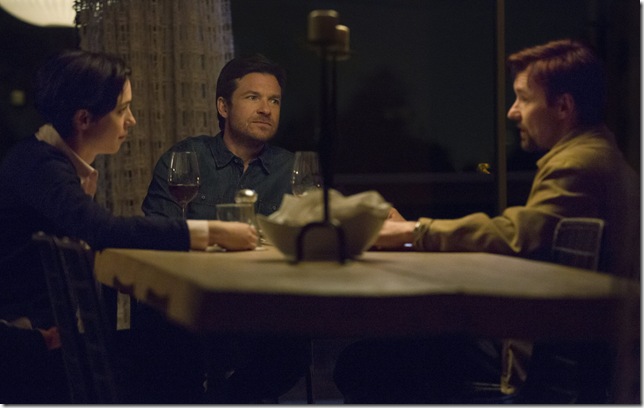 In its first half, The Gift is a fine movie for our panicked, over-surveilled, mentally unstable age, and the second half is even more powerful. Like Rosemary’s Baby, it opens on an average, happy, industrious couple visiting its new home, in this case a palatial California spread overlooking miles of lush greenery. But things get creepy real quick.

In the next scene, Simon (Jason Bateman), a rising star at a tech-security firm, and his wife Robyn (Rebecca Hall), an interior designer who gave up her career to support her husband’s, are buying supplies at the mall. But our eyes are more drawn to the out-of-focus guy gazing at them through the glass and fluorescence, who comes a few steps closer with every shot.

This is Gordo (Joel Edgerton), socially awkward and suspiciously bearded, who approaches Simon with a friendly, unreciprocated overture: They went to high school together, he says. Gordo cites the school, with some prompting. Simon, taken aback, accepts the claim without any memory to back it up. He takes Gordo’s number, expecting this chance encounter to be the end of it.

Then the gifts begin to show up, little packages with red-enveloped messages that appear on Simon and Robyn’s doorstep — from bottles of “welcome to the neighborhood” wine to DVDs that would sound great on Simon’s luxe surround-sound home theater to koi for his outdoor pond — all from Gordo. But how did he get their address? By the time Gordo starts showing up at their door, always when Robyn is home alone, Simon’s apprehensions about this strange, lanky man escalate to a boiling point.

The Gift has compared itself to Fatal Attraction in its marketing materials, but it’s both better than and different from Adrian Lyne’s psycho-stalker touchstone. Written and directed by Edgerton, the film admittedly succumbs to a few horror clichés, eliciting cheap scares from such aural banalities as the sounds of torn packing tape and a dog whimpering against a sliding-glass door. But it also echoes and remixes faint plot points from excellent thrillers from Mystic River to Cache to In Their Skin, and just when you think you’ve grasped its direction, it changes course, deepening narratively as well as morally.

(This review may contain spoilers herein.) There’s no better twist than the transformation of Simon. Bateman is an actor of such regular-guy amiability that we’re conditioned to like him from the outset, and The Gift toys with our inherent sympathy for the “normal” suburban couple and our ingrown wariness toward the shady loner.

Gordo’s lingering presence methodically severs Simon and Robyn’s illusion of contentment, opening windows into long-repressed traumas. Robyn reverts to a crippling pill addiction, and Simon’s buried tendencies toward rage and duplicity creep demonically into his daily life. Gordo’s machinations are tearing this union apart, in other words, but you eventually get the impression that he’s doing them a favor: “The bad things, they can be a gift,” Gordo says, in a moment of forgivably on-the-nose dialogue early on.

If Gordo is a pitiful casualty of life’s iniquities, Simon is the movie’s full-blown psychopath, an avaricious bully who will stop at nothing to climb the corporate ladder. He ceases being Jason Bateman and becomes more like Patrick Bateman, the executive who murdered his way to the top in American Psycho.

But The Gift is so profoundly unsettling because its social commentary arrives without American Psycho’s thick coating of absurdism. It’s just straightforward capitalist blackness, wrapped up with paper, string and a bow, and left on the doorstep of a thousand American movie screens. Compared to this, skinned rabbits are a quaint diversion.

Film: Playwright August Wilson began his chronicle of the African-American experience throughout the … END_OF_DOCUMENT_TOKEN_TO_BE_REPLACED

Film: Just in time with the opening of movie theaters in Palm Beach County comes the season’s most … END_OF_DOCUMENT_TOKEN_TO_BE_REPLACED

Music: The very last concert Franz Joseph Haydn attended in his life was in March 1808, about a year … END_OF_DOCUMENT_TOKEN_TO_BE_REPLACED