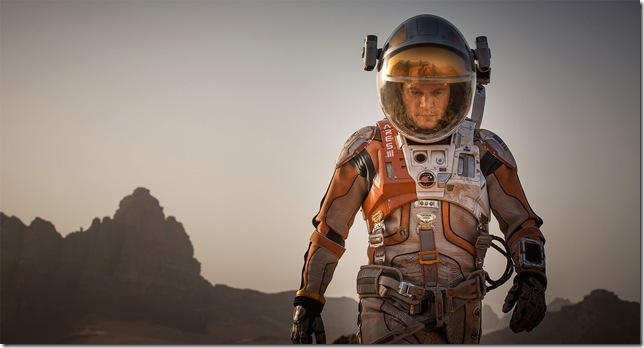 Mars is hot right now. For mega-rich space cowboys like Elon Musk and Bas Lansdorp, the fourth rock from the sun is their next frontier, their Xanadu, their far-flung solution to climate change. But the founders of SpaceX and Mars One are not alone: Thousands have already applied for private space missions some 20 or 30 years down the line, even if it means never returning to the only planet in our solar system that’s proven to sustain life.

The Martian, Ridley Scott’s loose-limbed adaptation of Andy Weir’s best-selling novel, is a pure fiction, but it rides a wave of Mars enthusiasm that doesn’t seem to be cresting anytime soon. Set in an unspecified future, the Mars of Weir’s and Scott’s imaginations is still an barren, chalky, lifeless void the color of Arizona vistas at sunset, but at least it can comfortably welcome teams of jokey astronauts.

The film opens on the crew of Ares 3, led by Captain Melissa Lewis (Jessica Chastain), collecting rock samples on Acidalia Planitia. Everybody is hiply sarcastic and happy-go-lucky, the way movie characters always are in the moments before disaster strikes. An insufficiently forecast bout of inclement weather stirs up deadly space dust, prompting an immediate evacuation — for everyone except for Mark Watney (Mark Damon), who accepts a shard of antenna in his abdomen and is presumed dead.

But Mark is very much alive. His crew long gone, he awakes on the surface of the planet, stumbling back into his team’s “Hab,” or Mars habitat, removing the foreign object from his gut and assessing his predicament: no water, food to last maybe a year, no way to contact Houston or his crewmates. And even if he could, Mars is a four-year commute, so he’d be long dead by the time their shuttle touched down.

It’s a good thing Mark is a trained botanist, skilled mechanical engineer, MacGyverish problem solver and eternal optimist — the perfect survivalist, whether it’s repurposing his waste for fertilizer in a makeshift Hab garden or devising a primitive way to contact NASA’s Jet Propulsion Laboratory. Once it becomes apparent to NASA terrestrials that Mark is indeed still among the living, the film divides its time between Mark’s industrious solitude and his employer’s no-expense-spared attempts to bring him home.

Back on the Goldilocks planet, the atmosphere is not unlike a House episode, with clutches of fast-talking, brainy people — pretty much everybody with a speaking part — working on one man’s behalf. These include NASA’s pragmatic director Teddy Sanders (Jeff Daniels, who’s basically asked to reprise Will McAvoy from The Newsroom), and director of Mars operations Vincent Kapoor (Chiwetel Ejiofor), with Kristen Wiig, Sean Bean and Donald Glover adding colorful support as their subordinates.

For all its 3D thrills and high-wire suspense, The Martian is in many ways the anti-Everest. A spirited movie about patriotic unification and scientific innovation, it’s the feel-good counterpoint to that blockbuster’s grim realism, the Ecstasy to its Quaalude. While The Martian will be more beloved, Everest is unequivocally the better movie. Ridley Scott’s résumé is studded with examples of uncompromising sci-fi, but his approach this time around, in apparent fidelity to the source material, is one of overwhelming levity in the face of an existential threat, a lightness of touch that panders even as it gratifies.

The film boasts the perpetual breeziness of Argo — another seemingly impossible rescue mission propelled by punch lines — where it could have delved into the physical, mental and psychic strain embedded in modern survivalist touchstones like Gravity and All Is Lost. Even when all appears lost for Mark Watney, there’s no room for the abject despair that even Pollyanna would suffer if she were stranded on Mars. He’s still Matt Damon through it all — charming, safely mischievous and telegenic even when his body is starved from forced rationing. Then again, when the plot allows for so many miraculous Hail Marys to rise from foiled ideas like contrived phoenixes, it’s difficult to consider the heft.

But the movie’s most implausible fiction is the concept of a gleaming, well-funded, insatiably curious, populace-capturing NASA. These days, with the manned space program decommissioned and Russia doing all the intergalactic legwork, the earthbound environment of The Martian is as inconceivable as its space-opera theatrics. If Scott’s sunny sci-fi bauble can spark a renewed inspiration in this moribund American institution, then perhaps it’s all worth it.

Film: Playwright August Wilson began his chronicle of the African-American experience throughout the … END_OF_DOCUMENT_TOKEN_TO_BE_REPLACED

Film: Just in time with the opening of movie theaters in Palm Beach County comes the season’s most … END_OF_DOCUMENT_TOKEN_TO_BE_REPLACED

Music: The very last concert Franz Joseph Haydn attended in his life was in March 1808, about a year … END_OF_DOCUMENT_TOKEN_TO_BE_REPLACED