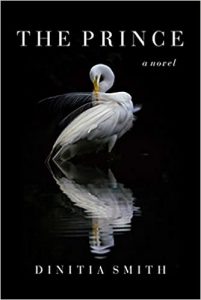 It took a former book reviewer for the New York Times to cleverly update Henry James’s best and, at 600 pages, longest novel, The Golden Bowl.

Dinitia Smith has just launched The Prince, cutting 300 pages and speeding the pace — thereby catapulting the Gilded Age into the modern age.

Smith, who was also an Emmy-winning independent film maker, writes clearly, directly and to the point, none of those being James’ strong suits. But she wisely retains his books’ best aspects: intriguing plot, psychological insights, obsession with secrecy and characters who are both virtuous and sinful.

Smith introduces a naïve, 27-year-old American heiress who lives at home with her beloved, widowed father. Her family’s massive fortune attracts a handsome, charming, impoverished Italian prince. She’s worried her father will be lonely after she marries, so she is relieved when he weds her gorgeous best friend.

What this 21st-century “dollar princess” doesn’t know is that her husband and her sexy pal (who can finally stop “fending for herself” and “scrounging for money”) are hiding a bombshell.
“Perhaps someone who is as rich as her could afford to not see the evil in the world,” writes Smith.

Meanwhile the bride’s father wonders, “If she doesn’t learn the reality of things, what would happen when he was dead and gone?”

Smith believes James lived his life under a monumental secret.

“He was probably gay in an era where he could not talk about that,” she said. “My theory is he disguised his feelings in his books when he described secret longings, passion and unrequited love.”

Smith notes that the family in The Prince is burdened with secrets, both adulterous and historical.

She writes about the widowed father, “He was quietly, a very rich man. His wealth surrounded him, it was the air that he breathed. The family’s wealth was largely invisible these days, except for their big, impregnable houses and their private island far out in the middle of Long Island Sound. There were no buildings with their name on them, no websites with products they manufactured. The original sources of their wealth had long disappeared, leaving only their money, which had grown immensely over the years.”

Smith set part of her book on a splendid, rarified private island, similar to the real-life Gardiners Island (in the family since 1639.)

“The descendants of those great robber baron fortunes, made in the late 1800s and early 1900s, are with us today,” she said. “I’m curious how they deal with the guilt. What do they do with those terrible things in the background?”

Scholars theorize that James, who wrote 20 novels and 100 stories in the late 19th and early 20th centuries, had carpal tunnel syndrome. He dictated The Golden Bowl (1904), which may account for all those run-on sentences.

There is no shame in wishing for shortcuts to the revelations of Henry James. When the Wall Street Journal’s WSJ Book Club discussed The Golden Bowl in 2015, Global Arts Editor Eben Shapiro confessed he listened to the audio book.

Smith has a lot in common with James. Both were the children of professional writers. Both divided their time between England and the United States. Smith’s father was the London bureau chief for Associated Press and came to America as a teen.

Notably, the mothers of the ingenues in The Golden Bowl and The Prince died young, having a huge impact on their surviving daughters. Smith’s mother died in childbirth (with the baby) when the author was 4½ years old.

“It was very hard for me,” Smith recounts. “I remember when she died and it will always affect my later life.”

A year later, she went to NYU Film School (as it was known then) and in 1975 won an Emmy for her documentary, inspired by the book Against Our Will: Men, Women and Rape, by Susan Brownmiller.

But Smith, who won the same prestigious filmmaking award that Susan Sontag did, had young twin boys. It was impractical to travel to Hollywood to raise money.

“I went back to journalism because I could write from home,” she said.

Smith wrote for New York magazine and then the New York Times, where she also reviewed poetry.

She is still in the cinema game. Several years ago, Jessica Chastain’s Freckle Films optioned Smith’s previous book set in Venice in 1880, The Honeymoon: A Novel of George Eliot. (It’s based on the true story of Eliot, age 60, marrying a much younger man, who then attempted suicide.)

Contemporary author Ruth Ware proved in 2019 that there was a huge commercial market for revamped Henry James novels. Her novel, The Turn of the Key, was a best seller.

The Prince may enjoy the same success.

Sharon Geltner is the author of Charity Bashed, a Palm Beach mystery and social satire, available on Amazon.

Film: Playwright August Wilson began his chronicle of the African-American experience throughout the … END_OF_DOCUMENT_TOKEN_TO_BE_REPLACED

Film: Just in time with the opening of movie theaters in Palm Beach County comes the season’s most … END_OF_DOCUMENT_TOKEN_TO_BE_REPLACED

Music: The very last concert Franz Joseph Haydn attended in his life was in March 1808, about a year … END_OF_DOCUMENT_TOKEN_TO_BE_REPLACED